From The Herb Garden: Serviceberry 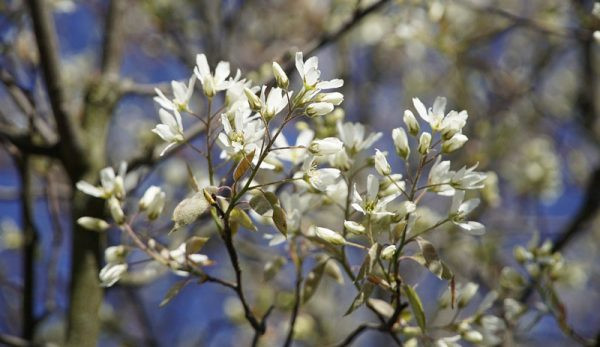 Serviceberries are delightful native shrubs that offer a seasonal burst of color to the landscape. They also provide a flavorful edible treat to enjoy in the early summer.

With various species native to every state, excluding Hawaii, as well as across Canada, serviceberries are also known by a number of other names, such as juneberry, shadbush and saskatoon. Â

The name “Shadbush” originates in the New England states. It refers to the shad runs and how these particular fish begin their mating migration around the same time that the shadbush begins to bloom.

In the Pacific northwest and into Canada, the shrubs earned the name saskatoon, derived from the Cree name for the plantâ€”misĂ˘skwatĂ´mina.Â

And of course, the name juneberry refers to the delicious, blueberry-like berries that can be found on the trees beginning around the month of June. Although, youâ€™ll have to be quick in order to beat the birds to these tasty morsels!Â

Serviceberry in the Landscape

Whatever your landscaping needs, thereâ€™s sure to be a serviceberry thatâ€™s right for you!

Serviceberries are from the genus Amelanchier, composed of more than 20 different species. Some serviceberries grow to be trees as tall as 60 feet or more. Others develop as low-growing shrubs.Â

Regardless of the size or growth habit, every Amelanchier blooms early. It will provide your landscape with a splash of white flowers well before most spring blossoms have appeared.

And in the autumn, your yard or garden will be set ablaze with serviceberryâ€™s stunning orange and red foliage.

Serviceberry in the Kitchen

Similar in appearance and flavor to blueberries, juneberries ripen from red to purple to almost black in some cultivars. The flavor continues to sweeten with each stage of maturity.Â

Serviceberries are more than just a tasty treat. They are also quite good for you! They are an excellent source of Vitamins C, A and E as well as manganese, magnesium and iron.

Ounce for ounce, they are considered to be just as nutritious as blueberries. And you can enjoy them in a similar fashion in the kitchen.

Serviceberry in the Apothecary

Although rarely mentioned as a medicinal ingredient in modern herbal literature, serviceberry has a long history of use amongst indigenous populations across North America. They used all parts of the plants, including the bark and roots as well as the leaves, stems and berries.

The plant’s usage included a wide range of ailments, such as stomach upset, toothache and as a general wellness tonic.

Modern herbalists can use a decoction of the bark for its astringent properties. This can be used topically to tighten and tone the skin, as an antibacterial wash or to reduce inflammation.Â

Read more: Grow these culinary herbs for you and your chickens to enjoy!

Serviceberry is easy to grow and requires very little maintenance once established. The trees are self-pollinating, so you only need one for fruit production.

Be sure to inquire at your local nursery which species of Amelanchier will grow best in your area. Also take the time to learn about the various cultivars available.

Some serviceberry varieties have been bred for fruit production. Others have been developed for longer flowering times or more stunning fall foliage. Be sure to choose the serviceberry thatâ€™s right for you!Â

While the trees will certainly thrive in partial shade, they prefer a full-sun area for maximum fruit production. Keep your young trees well-watered until they become established. And consider mulching around the base of the tree to improve moisture retention.Â

Serviceberries are a wonderful native plant to consider for your gardens or edible landscaping. It will provide you with beautiful flowers, stunning foliage and delicious berries for years to come!Â