From The Herb Garden: Winter Savory 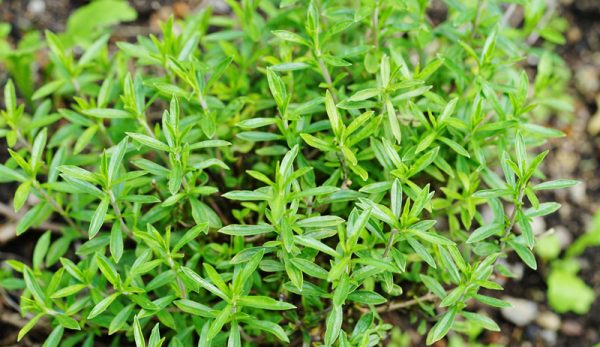 As the last remnants of fall fade away, making room for the oncoming winter, we move into a quieter time of reflection and hibernation. In the kitchen, our menus also reflect the new season as we trade our salads and fresh fruits for more hearty soups and stews.

Adding winter savory to our recipes will help our bodies adapt to the heavy, rich foods that are typical of this time of year. Winter savory may not be as widely known as other aromatic herbs, such as oregano, rosemary and thyme. But this peppery little plant certainly deserves your consideration.

A member of the mint family, winter savory is native to Southern Europe, the Mediterranean and Northern Africa. It was very popular amongst the ancient Greeks and Romans who considered it a magical herb, symbolizing love and eternal health.

Savory’s botanical name, Satureja montana can tell us a bit about its history and use. The genus Satureja is derived from the Greek satyr, a half-man, half-goat woodland demi-god with an insatiable sexual appetite. According to legend, these mythological creatures lived in meadows laden with savory.

It was widely believed by the ancient Greek that savory itself was a powerful aphrodisiac. The herb’s specific epithet montana means ‘from the mountains’, which is winter savory’s natural habitat.

Winter savory’s closely related cousin, Satureja hortensis, commonly known as summer savory, has a similar, albeit more delicate, flavor profile. Unlike its hardy relative, summer savory grows as an annual and will need to replanted each spring.

I prefer the perennial herb for this particular reason.

S. montana is so cold tolerant, I’ve enjoyed the potent flavor of its fresh leaves in the middle of winter. I simply brush away the snow to find and harvest the new green growth of a thriving plant below!


Winter Savory in the Kitchen

With its peppery, pungent taste, winter savory can be enjoyed in the kitchen in many of the same ways you would use thyme.

Toss a few sprigs into soups and stews to add depth and warmth to the meal. The herb’s umami flavor lends itself well to meat dishes.

Certainly, the classic use for winter savory is in a pot of beans. In the Mediterranean region, savory is commonly referred to as “The Bean Herb” where it’s been included in various bean dishes for generations.

Not only does winter savory’s flavor compliment the meal, but the herb also acts as a digestive aid. It can dispel the wind that far too often follows a hearty meal of beans.

While Winter Savory is most commonly enjoyed as a culinary herb, it is certainly quite useful in the apothecary as well. A simple winter savory tea is a wonderful remedy for stomach upset, cramping and indigestion.

The leaves contain rosmarinic acid and thymol, making this herb both antiseptic and astringent. A poultice of the leaves works well to relieve the itching and swelling caused by insect bites.

Try savory tea, with a bit of honey, to ease a sore throat!

With leathery dark green leaves and delicate flowers ranging in color from white to pale-lavender and pink, this semi-evergreen plant is easy to grow and makes an excellent border plant for any herb garden.

This low-growing perennial is hardy to temperatures as low as 10F (-12C). If your winters typically reach temperatures lower than this for an extended period, consider mulching around the plants to insulate their roots.

Use 3-4 inches of woodchips, straw or shredded leaves. Then remove the mulch the following spring. This will allow the soil to warm up more quickly.

During dormancy, winter savory will drop many of its leaves, but resist the temptation to trim away the barren stems. When warm weather returns, new leaves will quickly regrow.

Early spring is also the best time to divide your older plants to give them a fresh start. Simply:

Add a small amount of bone meal to the hole to encourage vigorous root growth.

Savory prefers full sun but will do just fine in partial shade. This herb makes a wonderful companion plant in the veggie garden too!

Planted near beans, it is believed to discourage weevils. Savory is also said to make onions sweeter when growing nearby. Pollinators absolutely love winter savory, so consider tucking a few plants near your beehive if you keep one.

Give winter savory a try! It’s easy to grow and full of flavor. This spicy herb is sure to make your winter feel warmer.