From The Herb Garden: Yarrow Is Beautiful & Beneficial

A beneficial plant for pollinators, herbalists and even brewers, yarrow is an herb that every gardener should know. Grow some in your garden to see for yourself. 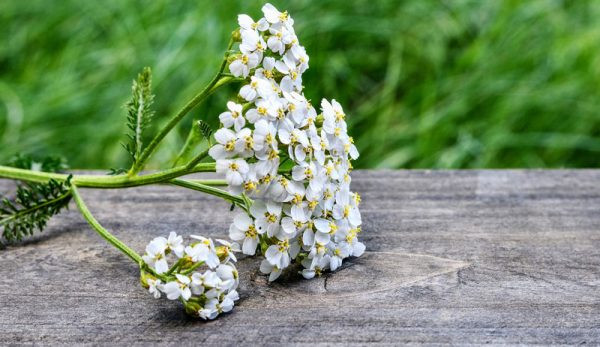 Yarrow is native to most of the Northern Hemisphere and has been introduced into Australia and other areas where it has widely been used to feed livestock. Commonly found on roadsides and open fields, this herbaceous perennial can also be spotted in landscape designs, as border plants along walkways and in medicinal herb gardens.

We learn much about this useful plant by studying its name. The Latin binomial for yarrow is Achillea millefolium. The genus, Achillea, comes from the Greek character Achilles and story of how he would use this herb to treat the battle wounds of his soldiers.

In fact, the herb’s leaf is considered both antiseptic and styptic. These traits that would confirm the herb’s beneficial qualities referred to in the Achilles legend.

Yarrow was used in a similar manner during the American Civil War. On battlefields, it earned the nickname “woundwort.”Â

The specific epithet, millefolium, which means “a thousand leaves,” accurately describes the feather-like appearance of yarrowâ€™s leaf. In fact, in some Spanish-speaking areas of the world, the herb is known as “plumajillo.” This translates to “little feather.”

The herb makes a wonderful addition to any garden or landscape. The typical wild yarrow boasts full white flowers during peak summer months. These blooms are born upon erect, narrow stems that reach up to 3 feet or more in height.Â

There are numerous cultivars available from local nurseries. They offer a wide range of available blossom colors including pinks, reds, yellows and oranges. Many of these strikingly colorful yarrow varieties have even been recipients of the Royal Horticultural Society’s Award of Garden Merit.Â

Incorporate yarrow into your landscape anywhere you need a burst of color. Utilize its tall, narrow stems as a vertical element to add balance and form to your garden beds.

Read more: You should also consider comfrey for your herb garden. Here’s why.

As mentioned above, yarrow has a history of topical use for treating wounds. Consider crafting a salve from your harvest to use on cuts, scratches, bruises and other abrasions.Â

(Learn more about how to craft an herbal salve in my book, The Artisan Herbalist.)

Simply chew up a yarrow leaf and use it as a natural band-aid if you need a little first aid in the garden! The masticated leaf will help stop bleeding and disinfect your wound.

A tea brewed from the flowers and leaves of yarrow is useful in relieving digestive complaints. It may also work as a sleep aid. Try blending with chamomile flowers for a sleepy-time tea!Â

Although not popular as a vegetable, yarrow is certainly edible. Some folks describe its flavor as grassy. But others may find it too astringent to be palatable.

You can add it to salads or cook in stir fry. Most commonly, though, you’ll find it in herbal tea.

Before the widespread use of hops, yarrow was included in the blend of herbs used to flavor beer. In the Middle Ages, this herb blend and the resulting beverage, was known as gruit.

While not as common as it once was, gruit is making a bit of a comeback. You may even find it offered at a local microbrewery. Â

Read more: Home brewing your own beer is the perfect hobby for staying in.

Yarrow is quite drought tolerant. Once established in your garden, it will thrive for years.

A perennial herb, yarrow spreads by underground rhizomes. Bunches should be split every few years to encourage healthy growth.

If growing yarrow from seeds, remember that germination rates are highest in warm temperatures, around 70 degrees F. The seeds also need light, so lightly cover them with 1/4 inch of soil or less when planting.

And keep the seedbed moist. Yarrow prefers well-drained soil and full sun, but it will do fine in partial shade as well.Â

Butterflies and other beneficial insects certainly love yarrow. And once you try adding some to your garden, Iâ€™m sure youâ€™ll love it too!