8 Crops that Can Survive a Little Frost

Crops such as kale, collards, turnips and even certain types of lettuce can survive—and even improve—with frost, so they're ideal for fall and winter planting. 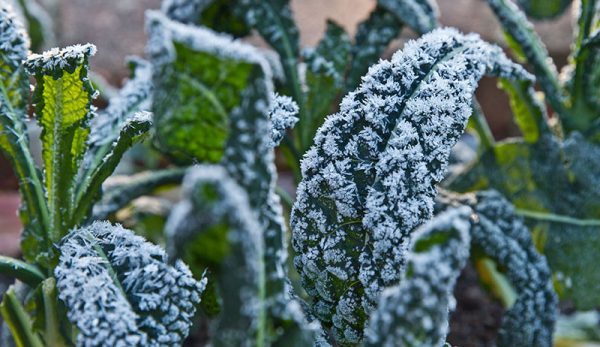 Frosts can come early in the spring, late in the summer or, in the coldest reaches, any time at all. Some crops are hardier than others, though, and certain crops even improve with a little frost, giving them an enormous advantage in temperature dips.

With that in mind, let’s explore some crops that can handle a little frost without much trouble, making note that some varieties of these crops will almost always handle the cold better than others, and that repeated frosts will render almost every crop unusable. For those situations, a little row cover, not touching the plant, is ideal to extend their seasons.

Few crops are hardier than Brussels sprouts. It is a very long season crop and takes several months to grow, but once established (and through the pests), it will thrive well into the colder months. The occasional direct frost will do little to injure it. We often find the flavor to improve greatly as the cold pressure moves in.

There are tender varieties of kale (shown above) and kales that seem utterly indestructible. Winter Bor and Red Bor are two of the latter. These crops can handle frost without struggle. Though repeated frosts (day after day) will ultimately wear them down, I’m not concerned about these are crops when I see a forecast predicting frost.

Waxy, hardy and delicious, the collard green plant is not often slowed down by a little frost. We often sow a little collards into a winter cover crop and pick them throughout the fall and into the early winter as they can handle the cold weather fairly well.

Certainly, lettuces can be tender and will wilt into oblivion during a frost, so match the right variety to the season. However, several varieties of lettuce can withstand the occasional frost with little or no struggle. This is best achieved when plants have time to “harden off” either before or after planting—a gradual introduction to the cold temperature that gets their cold-hardy genetics engaged.

Spicy and often colorful, certain varieties of mustard greens can handle a frost or two without damage—and even adapt to the occasional below-freezing mark with little protection. It’s not the hardiest not the list, but don’t overlook mustard greens.

A pre-frost turnip is OK. A post-frost turnip is a revelation. This, above all the rest, is arguably the one crop that improves the most with a frost. Nothing sweetens a turnip quite like a 32-degree night. Some turnips, including the rutabaga, make great storage crops, so you even have the option of letting them sweeten up then storing them for winter.

Ask any winter farmer what his or her most reliable crop is, and the answer will almost invariably be spinach. This crop can handle and adapt to very cold temperatures. With light protection, mature spinach can last all winter in most areas of the U.S.

Another crop that benefits from some colder temperatures is the carrot. Don’t let carrots hang out too long into the cold without protection, but with a little frost the carrot will begin to sweeten to a candy-like level, developing a sugar content on pair with many fruits.