Frostbite in Chickens: How to Prevent & Treat It

Sometimes it's so cold that chickens need to stay inside the coop, but that might not be enough to prevent frostbite. Here's how to spot it and what to do. 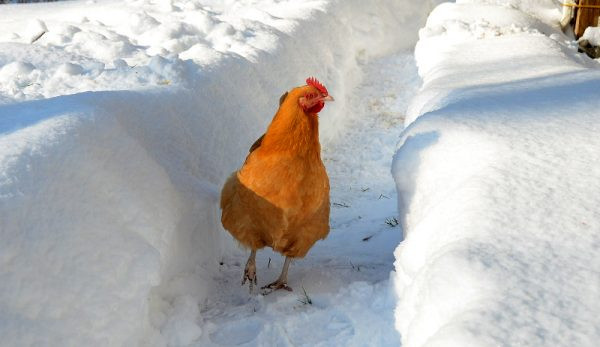 The temperature was minus-5 degrees F, meaning it was a bundle-up morning here in Michigan: extra layers, balaclava, thermal socks, liners under my work gloves. As the wind blew powdered snow across our acreage, I headed out for the morning release. Feeders were topped off, frozen waterers swapped for fresh, and all coop doors secured againâ€”the birds all still inside. With the bone-chilling blasts driving the temperature below zero, it wasnâ€™t safe for the chickensâ€”or meâ€”to be outside. When I went back inside, however, I wasnâ€™t alone. Davey Orpington peeked out from under my arm, his eyes bright and alert but his comb dull, its tips dark purple with frostbite.

“Frostbite is one of those risks for any animal, including humans, when temperatures turn cold,” notes Dr. R. M. “Mick” Fulton, a veterinary pathologist with 30 years experience in poultry pathology and medicine.

According to Fulton, extremities such as a chicken’s toes, wattles and comb are most susceptible to frostbite as these areas naturally lack the warmth brought by proper circulation.

“Those structures then die on their ends and get black and leathery, which is referred to as dry gangrene,” explains Fulton, who also holds a doctorate degree in pathology and is a diplomate of the American College of Poultry Veterinarians.

Safeguarding your flockâ€™s bodily structures starts with ensuring their residential structure can withstand the winter. All doors and windows should shut tightly within their frames, with no drafts entering to chill your chickens. While ventilation openings are necessary for air circulation, these should not be too big, nor should they open directly onto the birds or their perch.

It all comes down to exposure of those fragile combs, wattles and toes. While all chickens have toes, not all breeds have cold-hardy combs. Keeping frostbite out of your flock might simply be a matter of better breed selection. In regions where the winter temperatures routinely drop below freezing, breeds with single and buttercup combsâ€”tall and multipointedâ€”are more susceptible to frostbite than breeds with pea and cushion combsâ€”small combs that lie low to the skull. Sicilian Buttercups, Lakenvelders and Silver Gray Dorkings are stunning but wonâ€™t endure the winter as well as Ameraucanas, Brahmas and Chanticlers.

Having lived in the northern United States all my adult life, I of course chose Orpingtons with their gorgeous but cold-susceptible single combs as the main breed we raise on our farm. Weâ€™ve fortunately had very little incidence of frostbite over the years, thanks to two things: sturdy, draft-free coops and, for my Orp boys, little knit hats to protect their combs from the cold. Friends who keep microflocks have always chuckled at my chicken hats, but I find them to be more effectiveâ€”and hygienicâ€”than slathering combs with petroleum jelly. Both create barriers against the cold, but applying a coat of petroleum jelly might be more a panacea than a preventive measure.

â€śApplying petroleum jelly might delay the development [of frostbite], but I wouldnâ€™t think that it would be very protective,â€ť notes Fulton.

Davey, however, was beyond wearing a hat or being slathered with petroleum jelly. The points of his comb were gray-black with dry gangrene, although the base of his comb was healthy and red. While I itched to cut off the affected areas, I knew that it was best to let nature take its course.

â€śIf left alone, the dead structures will fall off and the remaining skin will heal over,â€ť explains Fulton. â€śIn this instance, the body is really good at healing itself. Nothing needs to be done.â€ť

In rare instances, frostbite can be so severe that the afflicted bird needs medical attention.

â€śIf the amount of tissue death is increasing and moving toward the healthy tissue, amputation of the affected site is important,â€ť stresses Fulton.

If your chicken is suffering from frostbite, carefully examine every inch of the ailing bird to determine the extent of the frostbite. The afflicted area should have very little to no feeling and can vary in color from slate gray and purple to dark blue and black. If you cannot determine the degree of your birdâ€™s frostbite, contact your veterinarian or your county extension for assistance. Make sure you examine all of your birds, especially those sharing the coop with the cold-injured chicken, as they experienced the same chill and drafts that caused the frostbite.

â€śBottom line: Keep your coops warm, and [frostbite] wonâ€™t happen,â€ť states Fulton. â€śOn very cold days, donâ€™t allow your birds to leave the coop. At this time of year, the attraction of sunlight and being outside is tempting, but your birds do not understand the consequences.â€ť

Davey was a model patient, standing cooperatively on our exam table while I checked his body for advanced frostbite. He allowed me to apply veterinary sealant to his dry-gangrenous comb and even allowed me to plunk a hat on him. He didnâ€™t seem too happy to be put back inside a shut coop, because it was such a sunny morning, but better to keep him in there until springâ€™s warmth is here to stay.