Jacey Dean left LA for her family’s 100-acre Wisconsin farm with two goals in mind. She wanted an orchard and a flock of pheasants (on a budget). 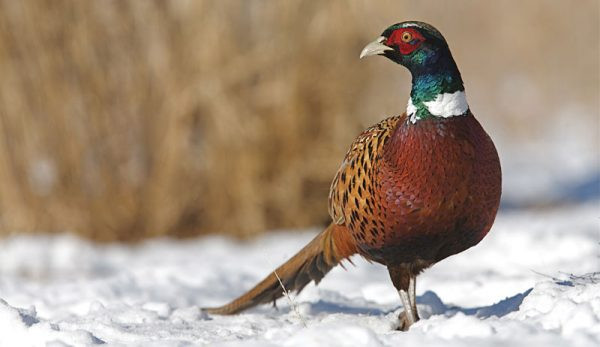 When I returned to my family’s 100-acre Wisconsin farm after more than a decade of living in the Los Angeles suburbs, I had a few plans. One involved finally planting an apple orchard to succeed the aging and dying trees we’d harvested when I was a teenager. The other was to finally raise a real crop of pheasants, beautiful birds that the Wisconsin Department of Natural Resources allowed residents to raise without a special permit.

Each year living in Southern California, when late winter rolled around, I’d get spring fever right on cue: that irresistible urge to find photos of baby farm animals, buy a few starter plants at a nursery, and walk barefoot in the grass. I had seed and hatchery catalogs delivered to my apartment mailbox. The problem? In Los Angeles, those months were frequently 80 to 100 degrees, there was hardly grass to be found, and the balcony of my condo could handle only one or two pots of flowers. This was definitely not a place to raise pheasants or plant an apple orchard. When it came time for the 2,000-mile, cross-country road trip back to Wisconsin, I wondered what it would be like to return to the farm. I was about to find out.

Pulling into the almost-empty homestead was at once familiar and not-so-familiar. Instead of seeing the old dairy goat herd, poultry and horses that were once present, I found the farm empty, with the exception of an old mixed-breed, three-legged farm dog wagging his bushy tail. Seeing those old pastures in various states of disrepair brought back so many memories, but there would be time for those later.

The next day, I toured the empty barns to see what damage 10 years of neglect had occasioned. The large, gray animal barn looked pretty good—a plethora of cobwebs, but still solid. The chicken pen was in good order, as was the tack room. I walked by what we called the “little pasture,” which was now riddled with noxious thistles, the wire fence sagging and posts splintered in ghastly stages of decay.

I sadly shook my head as I passed it, heading toward the giant red barn. As I swung open the creaking metal door, a mouse jumped in surprise and scurried away. “No!” I said out loud in disbelief. Well, I knew where to begin. There might not be a single fence in working order, but mice? No. It was time to get to work.

At first blush, planting an entire apple orchard sounded like an expensive endeavor. To visit a nursery and purchase 36 potted fruit trees, which could easily run $25 to $30 apiece, would mean spending more than $1,000 on trees alone. That’s enough to stop a small wannabe orchardist in her tracks. So I first found a way to cut the nursery stock costs.

I had located Van Well Nursery in Washington state, a large-scale, family-run fruit stock producer. Purchasing a wholesale lot of 50 trees greatly reduced the price per tree. So, guess what? I ordered a wholesale lot of 50 premium apple trees, to be delivered to the farm at planting time and at a total cost of less than $600. I then advertised on Craigslist premium apple trees available for spring planting and took orders by seeking nonrefundable deposits by mail. To my surprise, orders came in! I sold 14 of the 50 trees at double what I paid for them but still a bargain price to buyers. Now my cost for the remaining 36 trees was down to about $250.

Please note: Planting bare-root stock requires an understanding of root structure and a large amount of labor help. It saves cash outgo but increases the labor load. Choose your savings according to your farm’s strengths.

Pheasants are beautiful birds with delicious meat. They are allowed in many locales without a permit, and the colorful feathers make them a delight for the backyard farmer. They can also be very expensive. While I was willing to pay for a good set of chicks from a standard hatchery, I did a little research first.

As with the apple trees, I located a perfect source for pheasant chicks: Oakwood Game Farm in Princeton, Minnesota. Like the tree nursery, it is a family-run business that produces on a large scale and ships nationwide. This one, however, is only about thee and a half hours from our farm. This excited me, because I had always wanted to pick up chicks directly on hatch day to avoid the shipping stress.

Also exciting was the bargain bundle price on hen chicks. For a minimum order of 250 pheasants, you could get hen chicks for about one-third the cost of straight run, and the game farm price was already lower than that of a standard hatchery. Instead of paying $4 to $5 per pheasant chick (which would have run $1,000 to $1,250 for the lot), I purchased 250 beautiful birds for less than $200. And that included my fuel costs to pick them up.

As with the apple trees, I didn’t need all the chicks, so I also advertised them online. I sold about 50 as day-old chicks after picking them up. After the trees were planted and the remaining chicks were growing in their small brooder area, it was time for the part of the plan that would bring these two crops together: the fencing system.

Fencing was the one aspect for which I couldn’t find a bargain angle. “Bulk fencing” means thousands of acres, and no matter the discount rate, I didn’t have or need (and couldn’t afford) that much fencing. But I did need adequate fencing to keep the deer away from the young, delicate apple trees as well as contain the pheasants and protect them from predators. I also needed netting to cover the pheasant run, to meet state requirements and to prevent the birds from flying off and dying in the woods. (Interesting note: The survival rate of domestically raised pheasants released into the wild averages about 10 percent.)

My brain wheels started turning again; the apple trees would be 4 to 5 feet tall at the time of planting. To keep deer out, I’d need fencing 6 or, ideally, 8 feet high, as deer are excellent jumpers. For the pheasant pen, the only height needed was for convenience when going inside to feed, water or catch the birds, and to give them room to fly. A 4-foot-tall fence would be adequate, with the netting held higher overhead by support poles. Then I realized: If netting was overhead, deer couldn’t vault over a 4-foot fence. Could I plant the orchard and build the pheasant run around it? Bingo! There was the bargain angle, and my fencing costs were cut in half.

Putting It All Together

We opted for 6-foot, untreated wooden posts with the bases dipped in a thin layer of concrete, and 2-by-4-inch welded-wire fencing. Chicken wire would have been initially cheaper and ample to keep the pheasants inside the run, but I
was concerned about coyotes tearing through the fence. Also, given that the overhead netting would be removed in two or three years, I wanted the orchard fence to be sturdy enough to house other small livestock, such as sheep, after the trees grew larger. I then opted for 1-inch mesh netting, and I used a “first purchase” discount at a website to get about 30 percent off my total price. Another bargain scored, and the netting could be reused for years.

In spite of all of the bargains, not everything was ideal. The project did run into a few problems.

In spite of our best efforts, it took much longer to set up the fencing around the orchard than I’d predicted. It also took much longer for the pheasants to reach a size where a 2-by-4-inch mesh could contain them. Chickens grow much faster than pheasants, and I hadn’t made allowance for the huge size difference. Also, we discovered that pheasants begin to fly between 10 to 14 days old, and at that size they could squeeze right through the chicken wire covering the windows of their brooding pen. We lost a few dozen birds to escape before the problem was solved.

Because of the delay in putting the pheasants into their netted flight pen, our first batch of chicks suffered overcrowding, and we began to lose birds to cannibalism. (Pheasants are way more highly strung than chickens or guinea fowl, and at the worst point I was losing several birds daily to them eating each other.) I tried moving them into temporary outdoor pens to offer a change from their shaded barn environment, thinking the new digs would help curb the constant pecking. To my dismay, the bright sunshine only increased their activity, and the cannibalism exploded until we moved them into their permanent run.

I purchased “game bird” feed from a feed store, where a retailer assured me it was the high-protein content needed for pheasants (28 percent). I later learned by accident she had sold me a standard chick starter, with a few added ingredients at about 16 percent protein. I’ve always wondered whether having the correct protein ration (crucial for pheasants) would have curbed the cannibalism.

Once the fencing was complete, the netting was installed overhead, and the pheasants were enjoying their best life under the apple trees, the project was deemed a success. In spite of heavy losses (about 60 birds) from greenhorn mistakes, we were able to sell enough birds to cover our base costs. We also put 40 delicious game birds in the freezer and enjoyed the roasted meat all winter.

So, guess what? I’m already planning my next combo crops.