Worried about leaving gas in your farm machines during the off-season? Gasoline normally degrades quickly, but a fuel stabilizer can slow the process. 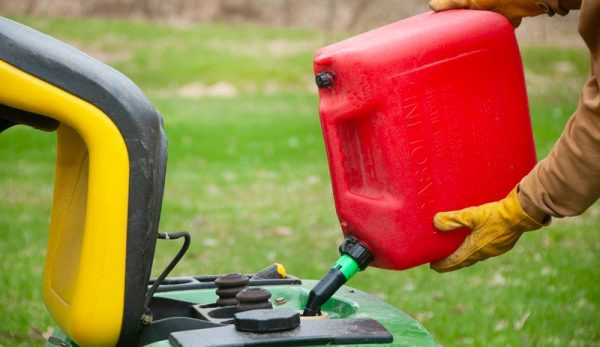 Like most things, gasoline doesnâ€™t last forever. That might seem like an obvious statementâ€”any tank of gasoline will eventually run dry as you put it to good useâ€”but weâ€™re not referring to the quantity of gasoline in your tractorâ€™s fuel tank. Weâ€™re actually speaking of its stability.

Just like food and beverages, gasoline will expire if it isnâ€™t used within a certain amount of time. This potentially causes significant issues for engines trying to burn it.

And unfortunately, it doesnâ€™t take long for gasoline to reach its expiration date. Oxygen is gasolineâ€™s enemy. Over time, exposure to air will degrade the gasoline until its most volatile compounds have evaporated and the fuel is no longer as combustible.

Learn how to safely store gasoline over the winter.

Worse, when gasoline degrades it can coat the inner workings of the fuel system with a substance often compared to varnish. It clogs fuel lines and even chokes the carburetor until the engine wonâ€™t run properly (or at all).

Gasoline containing ethanol can be particularly problematic. Ethanol absorbs water vapor and can separate from the gasoline if too much water accumulates. This spoils the mixture entirely and causes engine problems.

Even a little water can lead to corrosion of fuel lines and components.

Draining Is a Drag

Normally you donâ€™t have to worry about gasoline expiring. Say youâ€™re concerned about keeping the fuel system of your trusty tractor in tip-top shape. So long as youâ€™re using your tractor all year round, youâ€™ll burn through fuel long before it starts degrading.

But gasoline can start degrading within a month or two under less-than-ideal circumstances. So for machines that receive infrequent or seasonal use (snow blowers, lawn mowers, etc.), how do you prevent the gas inside from going bad during downtime?

One option is to drain the fuel tank, but this can introduce its own set of problems. A tank filled with nothing but air can be a recipe for condensation, introducing water that can corrode your fuel system.

And unless you drain every drop of gasolineâ€”easier said than doneâ€”the small amounts left behind can still degrade and cause issues.

Check out these 6 questions to ask when buying a snowblower.

A better alternative is to use a fuel stabilizer to extend the lifespan of the gasoline.

There are a couple of benefits to this approach. For starters, stabilizing the gasoline significantly slows down its degradationâ€”treated fuel can last for a year or more.

Secondly, having a stable fuel means you can fill the tank almost completely full before putting your machine away for the season, reducing the amount of air (and water vapor) in the fuel system.

Just leave a little room in the tank for the fuel to expand if temperatures heat up.

Adding a fuel stabilizer is pretty straightforward. Follow instructions for blending the correct amount of stabilizer into your tank. Then let the engine run for several minutes to let the stabilized fuel work its way through the system.

Once youâ€™re done, you can put away your machine for your season and trust it will be ready to roll a few months later.

Yes, thereâ€™s a bit of time and expense involved with adding a fuel stabilizer to the tank of an out-of-season machine. But as the old saying goes, an ounce of prevention is worth a pound of cure. And avoiding the pitfalls of degraded gasoline is well worth the trouble.