Scientists are working to formulate a common fungus that could be the cure against glyphosate-resistant Palmer amaranth. 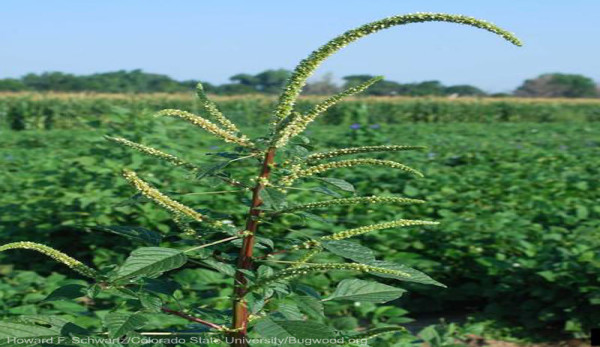 A naturally occurring fungus might prove useful in the fight against Palmer amaranth (Amaranthus palmeri), an aggressive southern weed that can grow at the rate of 2 inches per day and outcompete corn, cotton, soybean and other crops for resources, potentially reducing their yields.

To make matters worse, some biotypes of the weed have become resistant to glyphostate herbicides. As a possible alternative, USDA scientists in Stoneville, Miss., are exploring ways to formulate Myrothecium verrucaria, a fungus that attacks Palmer amaranth’s leaf and stem tissues, causing wilt, necrotic lesions, loss of chlorophyll, and other disease symptoms that can kill young plants and weaken older ones.

Studies by Robert Hoagland, Doug Boyette and others at the Jamie Whitten Delta States Research Center operated by USDA’s Agricultural Research Service in Stoneville, indicate Myrothecium can wreak similar havoc on biotypes of Palmer amaranth that resist glyphosate and other herbicides, such as triazines.

To test Myrothecium‘s infectivity, the researchers used a filamentous growth stage known as mycelium and sprayed a special formulation of it onto two batches of 4-week-old Palmer amaranth seedlings: those with glyphosate resistance and those without. They repeated the same procedure with 6-week-old plants. All groups were visually checked for symptoms over the experiment’s seven-day (168-hour) period and then weighed for reductions in shoot growth.

Seedlings were most susceptible, with all plants exposed to a full-strength application of the fungus showing disease symptoms. By 48 to 72 hours, nearly 100 percent had died. In 6-week-old plants, symptoms progressed more slowly, but there was no significant difference in injury between glyphosate-resistant and glyphosate-susceptible plants. Both groups showed disease symptoms, most notably chlorosis, some necrosis and stunted growth.

The findings, published in Allelopathy Journal, mark the first report of Myrothecium‘s bioherbicidal activity against a weed species with glyphosate resistance.