The striking Galloway is a quintessential hardy, Northern breed that adapt well to Southern climates. Consider them for your beef or milk production purposes, especially in a grass-fed setting. 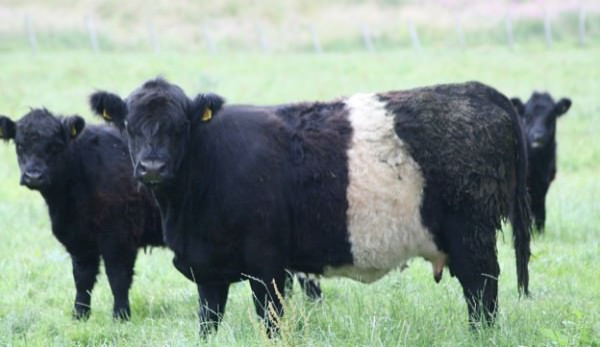 Use: Galloways are an ideal breed for forage-based beef production. Efficient grazers and browsers, they readily consume and fully utilize brush and coarse grasses that most breeds spurn. Galloway beef is flavorful. The breed is noted for producing well-marbled carcasses with large ribeyes and very little internal fat. When Galloways shed their winter coats, their soft undercoat can be combed, blended with other fibers, and spun into yarn. And, due to their protective nature, a few Galloways in a pasture are as effective as donkeys or llamas for guarding sheep and goats from wandering dogs.

History: Galloway cattle originated in the Scottish Lowlands in the six shires that made up the Province of Galloway. As early as 1570, Scottish philosopher Hector Boece wrote of Galloway cattle, saying, “In this region ar mony fair ky [cows] and oxinãÎ[their] flesh is right delicious and tender.” Flemish cartographer Abraham Ortelius seconded that notion in 1573 when he wrote, “In Carrick [then part of Galloway) are oxen of a large size, whose flesh is tender, sweet and juicy.” Records indicate that most early Galloways were black but red, browns, and brindles, with or without white markings were also fairly common. Most were then as now naturally polled (hornless). The first Galloway arrived in Canada in 1853. In 1872, the Ontario Galloway Herd Book was chartered and in 1882, Canadian and American fanciers united to form the North American Galloway Association. A few years later, American breeders formed the American Galloway Breeders Association and the Canadian group reorganized as the North American Galloway Breeders Association. The latter registers black, dun, and white Galloways in separate sections of the Canadian Galloway Herd Book, the oldest continuously maintained Galloway herd book in the world. A separate American registry for Galloways of the belted variety (the United States Belted Galloway Society) was founded in 1951, although the American Galloway Breeders Association also registers Fullblood, Belted, and White Galloways in separate herd books.

Conformation: According to American Galloway Breeders Association registration rules, Galloway cattle come in three patterns: solid, white park, and belted. Solids are black, red, or dun (in shades ranging from silver to brown). A moderate amount of white on the underside is permissible. White Galloways must be of distinct “white park” coloration: white with black, red or dun pigmented on the nose, ears, hooves and around the eyes. Some pigmentation on the legs, udder, and poll and a moderate amount of freckling throughout the body is permissible. Belted Galloways may be black, red, or dun, and must have a complete white belt encircling their midsections. What all three color phases have in common are depth, thickness, length of body, and intermediate size, with cows weighing 1000 to 1300 pounds; bulls, 1800 to 2000 pounds. A hallmark of the breed is its handsome winter coat consisting of a layer of soft, insulative undercoat topped by a covering of coarse, wavy outer hair perfect for shedding wind and rain.

Special Considerations/Notes: Galloways are friendly, docile cattle; even bulls are noted for their calm demeanor. Cows are milky, maternal, and long-lived, with a well-deserved reputation for getting in calf every year. And, though Galloways are a quintessential hardy, Northern breed, they adapt well to Southern climates too. Galloways are listed on the American Livestock Breeds Conservancy’s conservation priority list under the Watch category (“Fewer than 2500 annual registrations in the United States and a global population of less than 10,000”) and Belted Galloways as a Recovering breed.