Photo by Audrey Pavia Mr. Molly, hanging out by the garage door. I recently wrote about how my chickens constantly follow me around when I’m in the backyard. Shameless beggars, they have no qualms about pattering around behind me as I do my chores. Lately, they have developed another interesting quirk. They have become obsessed […] 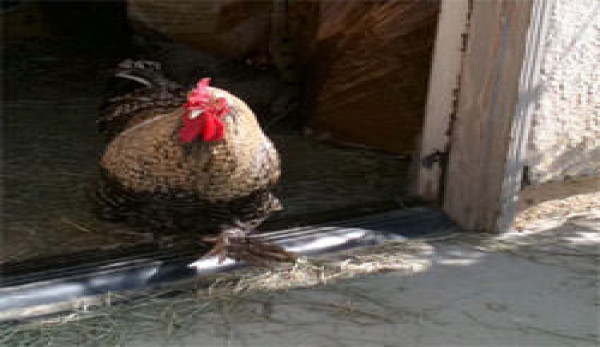 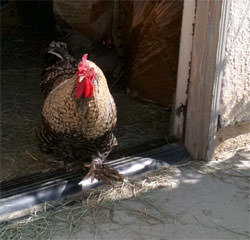 Mr. Molly, hanging out by the garage door.

I recently wrote about how my chickens constantly follow me around when I’m in the backyard. Shameless beggars, they have no qualms about pattering around behind me as I do my chores. Lately, they have developed another interesting quirk. They have become obsessed with the garage.

I have a detached garage in the middle of my backyard, and I use it to store my hay and chicken feed. When I scoop out pellets and scratch for my flock each morning, a few pieces spill out on the floor. One day, when they were following me around, they discovered this and now live to get into the garage so they can scavenge on the spilled feed.

I normally keep the side door of the garage closed to keep the dogs and wildlife out. But when I’m doing chores — which requires going in and out of there — I leave the door open. The chickens are beyond excited about this, and quickly trot into the garage to look for spilled feed the moment I open the door.

I stack my hay near where I keep the feed, so it was inevitable that the hens would start exploring the bales out too. So on any given day, after leaving the garage door open for 20 minutes or so, I’ll walk in and find chickens perched atop piles of baled hay, enjoying the view from up high.

What’s funny about all this is how the hens react when I come into the garage. I’m not sure if it’s being in such close quarters with me, or that they somehow know I really don’t want them in there, but they get a panicky look in their eyes and quickly try to figure out how to get to the exit without having to pass me. I pay no attention to them, yet they act like this was all part of my master plan: to lure them into the garage, corner them and put an end to them once and for all.

Inevitably, whenever I walk into the garage after the door has been open for a few minutes, I hear squawking and fluttering. After frantically running in circles, they each make a beeline out the door, racing to safety — only to wander back in a few seconds later, already having forgotten I was inside.

What I’ve learned from this is that chickens are a lot like cats. Give them the impression they aren’t allowed somewhere, and that is where they will want to go. In the case of my cats, food isn’t the motivator — just a forbidden room is appealing enough. You don’t need anything of particular value or interest in it to make them work hard to get inside. Chickens, on the other hand, need a reason, and food is usually it.