Ag Bites: Make The Most Of Your Garden Hoop House, Year-Round

With some creative thinking, you can get the most out of your garden hoop house regardless of how hot temperatures are outside. 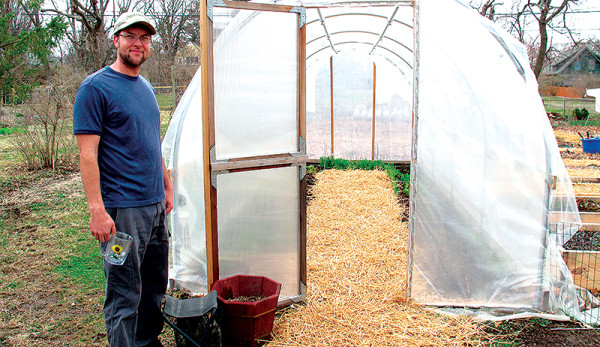 The concept of season extension always sounds nice, and when you finally get a hoop house, you realize what a valueÂ it is. Growing food sooner in the spring and later into the fallâ€”maybe even through the winterâ€”is more work but even more reward. When itâ€™s hot enough to grow your crops outdoors, it might seem too hot inside to do anything useful, though, so the question becomes: â€śWhat do I do with this hoop house in the summer?â€ť

This isnâ€™t the case, of course, as Pam Dawling told a standing-room-only group at the Organic Growers School Spring Conference earlier this year. Dawling, author of Sustainable Market Farming (2013), takes part in makingÂ enough organic produce for everyone at the 100-person Twin Oaks Community in Louisa, Virginia, with 3Â˝ acres and one hoop house. She offers the following ideas to make the most of your covered space year-round.

Pulling plastic can be a pain, but for farmers with no space to spare, removing the plastic opens that area for typical gardening activity. Removing the plastic also allows rains to rebalance the salt content in the soil, which can build up under cover.

Add vents and fans at each end, and convert the hoop house sides to roll up.

Used properly, shade cloth can make it cooler inside your greenhouse than it is outside. At Twin Oaks Community, it takes four people about one hour to put on a shade cloth and 30 to 40 minutes to take it off. â€śYou can grow very fast-growing cool-weather crops under shade cloth,â€ť Dawling says. This might be lettuce mix, arugula, baby kale, salad radishes or mustard greens.

Your shade cloth should cover the whole hoop house lengthwise but likely will not cover it from side to side. Pull the shade cloth all the way down the south side of the structure, as thatâ€™s where most of the sun is coming in, and worry less about the less-sunny north side.

Dawling suggests a knitted, non-PVC shade cloth with a 40-percent shade for vegetables, 50 percent for flowers and 60 percent for cool-weather vegetables in hot weather. A heavier shade clothâ€”80 percentâ€”makes a hoop house an ideal place for curing and drying your harvest, too.

Dawling goes for crops theyâ€™d like to have earlierâ€”tomatoes, peppers, etc.â€”for a first planting in the spring and crops that grow in warmer climatesâ€”baby ginger, turmeric, jicamaâ€”for a subsequent summer planting. Also, crops that grow better in drier climates make sense, as you have control over the amount of water your high-tunnel plants receive, unlike Mother Natureâ€™s watering schedule.

If you want to save seeds, growing crops in an under-plastic environment could force them to seed faster. Dawson lists beans, peas, okra, overwintered brassicas, lettuce, beets and chard as options.

â€śYou can help to improve the organic matter in your soil, and if youâ€™re unfortunate enough to have weeds in there, you can help deal with those,â€ť Dawling says.

Grow short-term cover crops, and donâ€™t allow them to go to seed. Brassica cover crops, such as mustard, can have a biofumigation effect on soil diseases, and legumes, such as soybeans and cowpeas, offer a nitrogen boost to your soil.

Pair a brassica cover crop with soil solarization to combat fungal soil diseases and nematodes. Till the cover crop when it flowers, and prep your beds for the next crop you plan to grow. Cover the soil inside the hoop house with plastic, and close up the structure for four to eight weeks during the hottest weather. â€śItâ€™s just killing off the stuff near the surface,â€ť Dawling says, so soil life will evacuate to about 6 inches down, but it will come back.

With all of the effort and expense that youâ€™ve put into getting a hoop house, you deserve to get the most out of it. With some creative thinking, this structure has something to offer even during the hottest months.