This bright green lizard can shift colors and is a welcomed part of the garden landscape. 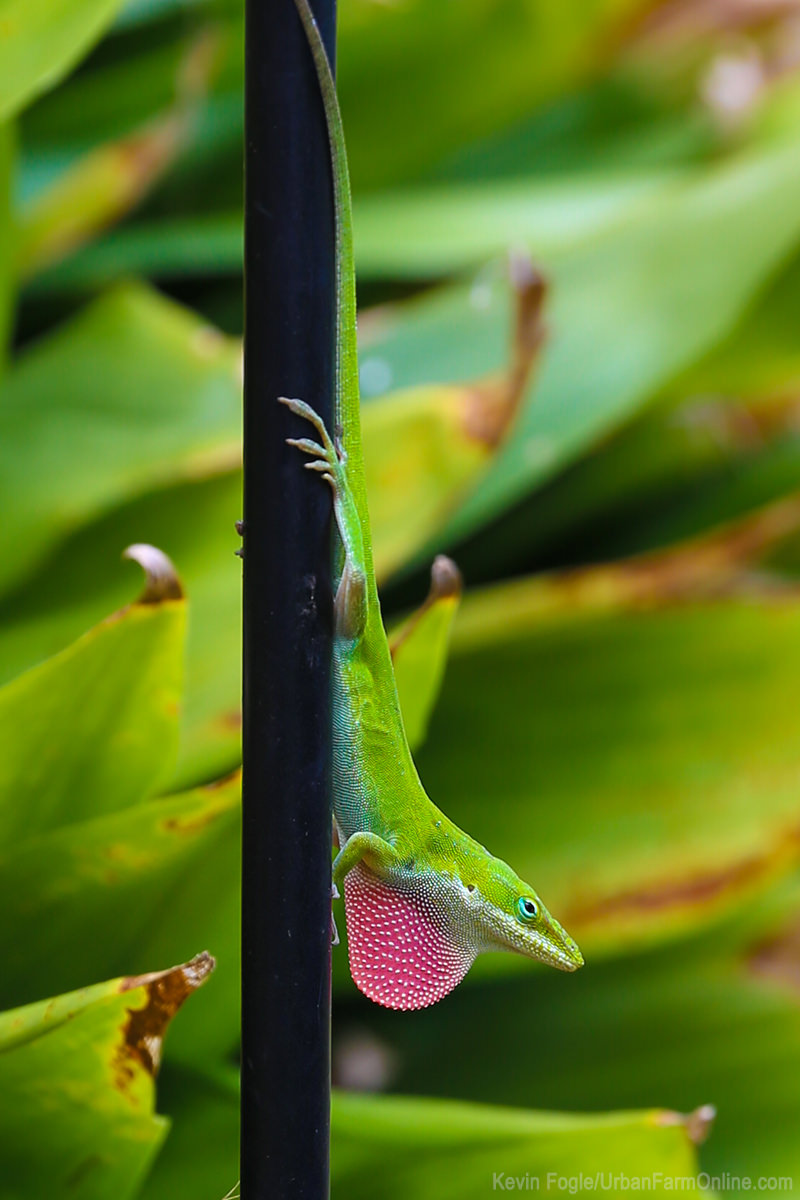 When I first moved to South Carolina from the mountains of Virginia, I had to adjust to a whole new set of flora and fauna in my semi-tropical yard and garden. Some of the first creatures that captured my attention were a group of small, bright-green lizards that frequented my hedges, landscaping and the exterior walls of my home. A naturalist friend quickly identified these lizards as green anoles (Anolis carolinensis), a species of lizard sometimes called the American chameleon.

In the United States, green anoles inhabit a range that extends across the Southeast from lower Virginia south to Florida and west to the eastern third of Texas. While several introduced species of anole lizards can be found in Florida, the green anoles are the only one native to the continental U.S. For gardeners living in their southeastern range (not in mountainous zones), itâ€™s a helpful garden companion, consuming a diet rich in insects and spiders.

Adult green anoles are slender, 5- to 8-inch-long lizards with a narrow head and a rather sharp snout. While it might sound big, the majority of its length is found in its long skinny tail. Males are larger than the females of the species and have a distinctive pink or reddish flexible fan of skin beneath the neck known as a dewlap. Males extend their dewlaps as part of regular behavioral ritual, both as a display of territoriality and to attract females for mating.

The common name, American chameleon, was likely given to green anoles because they have the ability to change color, but unlike true chameleons, the green anole can only shift between green, brown and grey shades. The lizards usually appear green, but their body color shifts with temperature, humidity and their mood. Their green and brown coloration makes them perfectly camouflaged in the vegetation that forms their natural habitat.

Like geckos, green anoles have adhesive pads on their feet that allow them to do some pretty spectacular climbing while hunting for dinner or defending their territory. Theyâ€™re active during the day and target moving prey, including spiders, flies, crickets, grasshoppers, cockroaches, slugs and a range of small beetles species. While these stunning lizards target beneficial and pest species indiscriminately, theyâ€™re an essential part of the native food chain in the Southeast and should be tolerated or encouraged around the yard.

If you live outside of green anole territory, there are plenty of native lizards species spread across the United States that are also considered beneficial species in and around the garden. Weâ€™ll talk more about other garden-friendly lizards in the near future.