These large, snake-like lizards are a predator to many garden pests, so if you see one lurking around your veggie patch, leave it be. 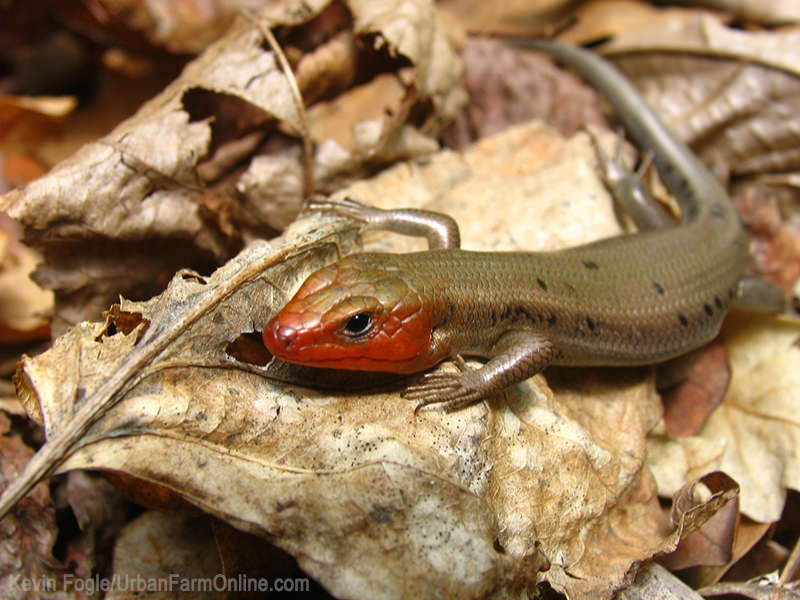 A common lizard found in nearly every region of the continental United States is the skink. Great lizards to have in the garden, skinks are hungry predators who love to munch on common yard and household pests, including grasshoppers, caterpillars, crickets, spiders, snails, cockroaches, beetles and even small mice.

While most skink species are identified by their distinct colors and markings, certain physical characteristics apply to most of the ones found in the United States. They‚Äôre medium-sized lizards that reach between 4 and 7 inches long as adults. Adult males of some species, like the Five Lined skink, can reach 8¬Ĺ inches (including their long tail).

Skinks have long slender bodies with short limbs and are protected by a smooth-scaled skin that‚Äôs similar to the skin of a snake. Their coloring can be extremely flamboyant, with many species exhibiting striped patterns with vivid metallic hues. Because they‚Äôre diurnal animals‚ÄĒmeaning they can be active both day and night‚ÄĒyou might find them sunning along the edges of buildings or on exposed tree roots. Most skink species are also ground dwellers that travel through dense vegetation and leaf litter to hunt their prey.

In the South, juvenile skinks or skinks with blue coloration are sometimes colloquially referred to as scorpions and are thought to have a sting or bite that is toxic to humans. This is a common misconception that has no basis in fact, as no known species of juvenile or adult skinks possess any stinging device or have a poisonous bite. A skink‚Äôs bite is powerful, but they are not aggressive and will only bite if you attempt to pick them up or otherwise provoke them. Sadly, many skinks are killed because folks believe they are poisonous or are sometimes mistaken for snakes.

Skinks play an important role in your local environment, helping to keep insect populations in check and can even be encouraged to visit or take up residence in your garden with a little work. Providing attractive shelter is as simple as leaving leaf litter on the ground and building a few small piles of logs or rocks around the perimeter of your garden.