Eight of the most commonly spotted and easily recognized garden pests. 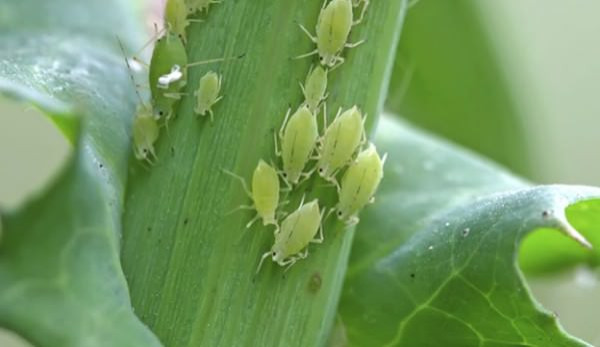 Characteristics: Aphids come in all different colors, depending on the plant and species: red, brown, yellow, black or green. They are small, pear-shaped insects with cornicles projecting out of the end of their bodies. Aphids have wings unless they are adults. These bugs can produce up to 80 offspring a week, so they tend to increase their population rather quickly.

Attracted to: nitrogen. Don‚Äôt use more nitrogen than you need in your vegetable garden. If you need to use it at all, apply it over time in small portions rather than all at once.

Look for: dense groups of pear-shaped insects on leaves or stems; yellowing leaves; sticky residue that turns black (sooty mold fungus) on leaves; lines of ants streaming up and down a stalk or stem.

Population reduction: Using a regular pesticide is not only poisonous to humans; it will also kill beneficial insects along with the aphids, so consider using a natural enemy, such as the ladybug, to take care of the problem. You can also simply use a hard squirt of water. Once the aphid has been knocked down, it‚Äôs not able to go back to the plant. If you see ants swarming or ‚Äúplaying‚Äù with an aphid on your plant, this is not the ant taking care of your aphid problem. Ants harvest them for the honeydew they release. You‚Äôll want to take care of both the ant and the aphid problem at that point.

Characteristics: Although similar to caterpillars, the older beet armyworm has obvious lengthwise stripes on its smooth skin. Attracted to: crowns of seedlings, preventing the leaves and vegetables from developing. They also like the foliage of vegetables. If you‚Äôve ever seen an entire leaf gone, other than the skeletal remains of its veins, it could have very well been a beet armyworm. These insects have also been known to make deep holes in tomatoes and strawberries.

Characteristics: This nocturnal caterpillar is known for curling up into a ‚ÄúC‚Äù shape when agitated and has black markings covering its dull-brown, yellow or green skin. You‚Äôll find cutworms right below the surface of the soil or on the lower parts of plants.

Attracted to: seedling stems and leaves. Nothing satisfies the cutworm‚Äôs appetite like boring its noggin into a head of lettuce or chewing young fruits and vegetables.

Look for: wilting or falling stems; holes in lettuce leaves; trails of silk

Population reduction: Keep your garden weed- and crop-residue-free during the winter. Grab a flashlight and head outside a couple times a week and hand-pick them off your crops. Using cardboard collars or a screen around your seedlings will protect them from these predators.

Characteristics: Universally despised, snails will eat just about anything. The only difference between slugs and snails is that a slug doesn‚Äôt have an external shell.

Attracted to: cold, foggy weather, living and decaying plants. Snails and slugs will go out at night to enjoy a meal consisting of fruits and vegetables close to the ground, such as strawberries, artichokes and tomatoes. Citrus is another favorite of these veggie predators.

Population reduction: The best way to get rid of snails and slugs is to eliminate their homes; get rid of hiding places, such as boards, stones, foliage debris around tree trunks, leaves close to the ground and ground covering, such as ivy. Switching from sprinklers to drip hoses will reduce the moist surfaces that snails and slugs desire. Companion plants, including California poppies, geraniums, impatiens, rosemary and fuchsias can help reduce your snail and slug population as well. Urban chickens, when penned in the affected area, can take care of the issue, too. Just don‚Äôt let them eat your seedlings!

Characteristics: These discernable pests are one of the most crop-devastating insects around. Readily indentified by its forceps-like appendage in the rear of its body, this reddish-brown insect will keep coming back for seconds in your garden. Although the striped earwig, mainly found in California, will actually help your garden by eating aphids.

Attracted to: cold and moist places that have soft fruit and sweet corn

Look for: seedlings that are missing all or part of their leaves or stems; webbing; irregular holes in leaves; deep holes in soft fruit

Population reduction: Reduce hiding places, such as loose clods of soil, boards, vines or weeds and damaged fruit. As with snails and slugs, try to eliminate as much surface moisture as you can by using a drip-irrigation system instead of a sprinkler system. Earwig traps are easy to make and quite useful. A tuna fish or cat-food can with a 1/2 inch of fish oil and a drop of bacon grease is very effective in catching these insects. Wash the can of earwigs out in a pail of soapy water the next day and you‚Äôre good to go.

Characteristics: Spider mites, which are actually arachnids, tend to look like little white dots on the surface of leaves. Be careful not to water-stress your plants, since spider mites are most likely to be damaging to those.

Attracted to: hot, dusty conditions; plants and trees next to roadways

Look for: tiny moving dots on the under-surface of leaves; webbing; tiny cut-outs of white dots on the leaves; bronze-colored leaves; leaves turn yellow and then drop off

Population reduction: Fortunately, spider mites have made more enemies than with just humans, including ladybugs. After spraying a simple soap-and-water mixture on the leaves that are infested, wipe them off with a rag. Dusty conditions can cause mite outbreaks, so be sure to catch the problem before having to use water to pat-down any dusty areas around the garden.

Characteristics: Adult whiteflies have yellowish bodies with white wings. Younger whiteflies don‚Äôt have wings. They will hang out in groups on the undersides of leaves. Whiteflies have the ability to spread one plant virus to another, so you want to take care of them as soon as you can.

Population reduction: Unfortunately, whiteflies are difficult to get rid of. The most ecologically friendly way to take care of them is washing the plant, especially underneath the leaves, a few times a week after spotting them. Use an insecticidal soap made from naturally occurring plant oils and animal fats. Companion plants, such as daisies, sunflowers, cosmos and dill, will attract green lacewings, which feed on whiteflies. Ladybugs do as well.

Characteristics: Adult leaf miners are black and yellow flies. The larvae are what feed beneath the leaf surface, creating those distinct trails of white on the top of infected leaves.

Look for: white trails throughout the topside of leaves

Population reduction: Since leaf miners are protected by living inside the leaf, they are difficult to control. The most organic way to keep leaf miners off your veggies is to plant trap crops; plants that attract the pests away from your other crops. Plant lambsquarter, columbine and velvetleaf; they will steal leaf miners away from your crops.