I was lucky enough to be invited to Rhode Island this summer to film a segment for the television show Cultivating Life. 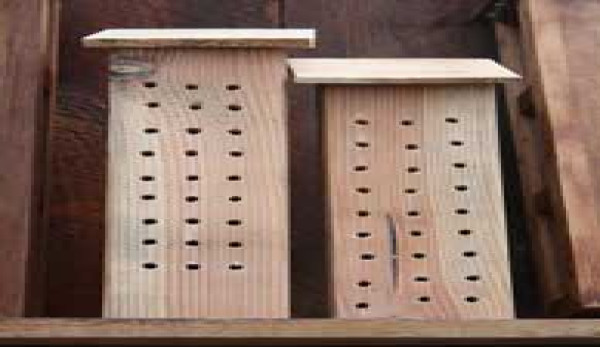 I was lucky enough to be invited to Rhode Island this summer to film a segment for the television show Cultivating Life.Â

Last year, on the tails of the release of my book Good Bug Bad Bug, I was invited to talk about beneficial insects in the garden.Â  This year they asked me to discuss alternate pollinators.Â

The showâ€™s overall focus was the honeybee, but they also wanted to focus on some of the lesser known pollinators found every day in our landscapes.Â

Most gardeners donâ€™t know there are over 3,000 species of native bees across North America; most of which donâ€™t sting and live solitary lives.Â  They do the important work of pollinating literally millions of plants and are busily trying to pick up the slack left behind by Colony Collapse Disorder.Â

Unfortunately, many of these little guys are suffering from habitat loss, parasites, and pesticide exposure just like the European honeybee (who seems to get all the press lately).Â

These little native bees are real workhorses in the orchard and garden.Â  You can encourage them by planting a diversity of blooming plants, especially those with clusters of small flowers (like dill, fennel, alyssum, yarrow and the like), by cutting out the chemicals, and by allowing a portion of your garden to stand through the winter.Â

Cutting perennials and grasses to the ground each fall, eliminates overwintering and egg laying sites for all sorts of beneficial creatures, including some species of native bees.Â

Making a few orchard mason bee nesting blocks and hanging them up around the farm is another sound idea for luring in this specific, and very important, pollinator.Â

Bees, though, arenâ€™t the only pollinator we discussed on the show.Â  Beetles, flies, wasps, and other insects, as well as hummingbirds, moths and butterflies are all helpful pollinators.Â