This January marks the fourth year that we have been building the garden on the cliff next to our home. 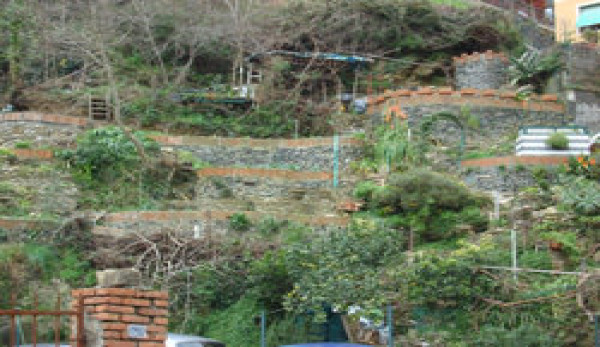 This January marks the fourth year that we have been building the garden on the cliff next to our home.Ā Ā

When we started, the slope was covered in thick berry vines and dotted with scrub trees.Ā  It was not possible to climb in the area without a machete, so the first work was all about cutting narrow pathways and establishing handholds that allowed us to climb up and across the area.Ā

The next task was outlining the basic planting areas, and this was done with rocks piled up and lots of sticks stuck in the ground to outline the beds.Ā

The first photo, from street level, shows the garden after two years of work.Ā  Iāve always regretted that I never took a photo of the hill before the garden work started, but take my word for it, it was a jungle.Ā

Ā Clearing all those vines and cutting out the roots of the scrub trees has been slow and bloody work.Ā  Iāve worn out about fifteen pairs of leather gloves every year, so this project has consumed approximately one hundred and twenty pairs of gloves to date, as well as a dozen or more brok en hand tools like hatchets, saws, shovels and picks.

Although the infrastructure work has dominated the project so far, this has always been a working garden, and from the first season we have been enjoying a reasonable vegetable harvest.Ā

The location is fairly sunny, and weāve been able to grow a lot of tomatoes, squashes, peppers and beans, even when the beds were only two or three square feet in size.Ā

Each year, as the planting area has expanded, the harvests have grown larger and the seasonal crops more adventurous.Ā  Spring of 2010 will see relatively extensive plantings, and that fun makes all the hard preparation work seem worthwhile.Ā Ā Ā

The second photo shows the garden this winter after four years of work.Ā  Iāll admit that Iām still not too happy with the way the garden looks, but it is obvious that we are making progress.Ā

All those walls made with concrete and bottles have expanded the possible planting area considerably and these days one can stroll around in the garden quite easily because the whole network of stairs and pathways is more or less complete.Ā

There are several nice features, such as the manure heated coldframe that makes growing seedlings much easier and the nursery zone that can hold several hundred potted plants.Ā  There is also a nice garden sink on the top level with a big teak garden table and a waterproof storage cabinet for tools.Ā

Although weāre making quite a lot of progress with the infrastructure, unfortunately the site still looks like a messy construction zone.Ā  The next phase of work will be focused on specific beautification projects and cleaning up the visibly messy areas.Ā

They donāt really show yet, but there are a bunch of new fruit trees planted on the slope, and when these grow larger they will help soften the hard look of the terrace walls.Ā  We also have a lot of perennials planted in the corners and nooks where crops canāt be grown, so in a few more years these collections should mature into attractive plantings.Ā

I estimate another two years before the garden evolves into something really beautiful, but I think weāre on the right track.Ā