I was out in the garden the other afternoon with my son who, for some unknown reason, decided he wanted to plant some seeds. 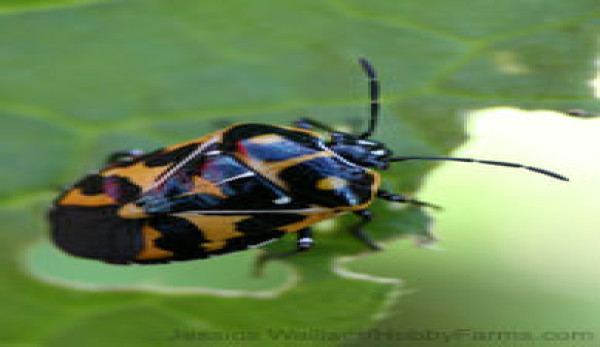 I was out in the garden the other afternoon with my son who, for some unknown reason, decided he wanted to plant some seeds. Despite my trying to convince him that planting seeds in December isn’t a very good idea, we headed out to the vegetable garden to plant some sunflower seeds into the half-frozen soil. I have dozens of packets of seeds so, frankly, it doesn’t really matter if they never come up (though they just might surprise us next spring!). Some gardeners might consider doing such a thing to be a waste of seeds and time, but we had a lot of fun working together and there is not a single thing bad about that.

But while we were out there, I did notice one bad thing. A very bad thing. I still have a handful of radishes in the garden and perched on one of the leaves was an insect that I have never seen in my garden before. Of course, I ran inside to get my camera and took a handful of pictures of it because I just couldn’t believe my eyes. Armed with the photos, I searched through some of my entomology texts to confirm my find. It turns out my suspicions right. Itâ€™s a harlequin bug (Murgantia histrionic).

Now this is an insect that is not typically found in my part of Pennsylvania. It is mostly a southernÂ pest and is seldom found north of the 40th parallel. In 20 years of professional gardening and farming, I had never seen one in person before. Yet there it was in my garden. They feed on plants in theÂ brassica family by sucking their sap and causing distorted growth that may turn brown and die.

If you live in a part of the U.S. where harlequin bugs are regulars, you already know that full-blown infestations can completely render the plants inedible. These insects spend their winters as adults and usually don’t survive in places with severe winters. In the South, they can produce three or four generations per year! We haven’t had many severe winters here lately, and though they are attractive insects, I don’t really want them calling my garden home. As I understand from several of my entomologist friends, the ranges of many different insect species are shifting. To me, it is the most tangible evidence of global warming, and it’s scary stuff.