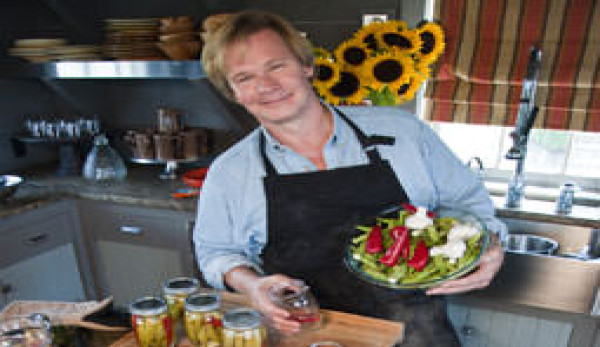 ŌĆ£There is a natural connection between the garden and the table, and thatŌĆÖs what this show is all about,ŌĆØ Smith says. ŌĆ£The culture of food in America is changingŌĆöthere is an emerging part of the population that is asking about their foodŌĆöŌĆśWhere did it come from?ŌĆÖ and ŌĆśHow was it raised or grown?ŌĆÖŌĆöand many of them are taking that task into their own hands. I want to see these people succeed, and this show is a great way to teach them.ŌĆØ┬Ā

Highlights of the showŌĆÖs first season include a tour of SmithŌĆÖs orchard and delectable fruit recipes, an episode dedicated to the wonderful world of eggs, everything you wanted to know about salad greens, and how to turn even the smallest space into a mini-farmŌĆöbeehive included. Smith will welcome guest chefs who are stars in the local-food movement to demonstrate recipes with ingredients straight from SmithŌĆÖs garden. And a few of his own family members will stop by to share some of the delicious recipes he enjoyed growing up.

Smith has garnered a loyal following in the 10 seasons of P. Allen SmithŌĆÖs Garden Home, and the producers of his new show guarantee the same level of satisfaction. As a trusted authority on all things garden, SmithŌĆÖs next natural step is taking what he grows to the kitchen and to the table.

SmithŌĆÖs work is inspired by a childhood spent on the farm raising and showing livestock and poultry, and he promotes good stewardship of the Earth. In 2009, he founded the Heritage Poultry Conservancy, an organization dedicated to the preservation and support of all threatened breeds of domestic poultry. HeŌĆÖs also the author of several books, including the Garden Home series (Clarkson Potter/Random House).