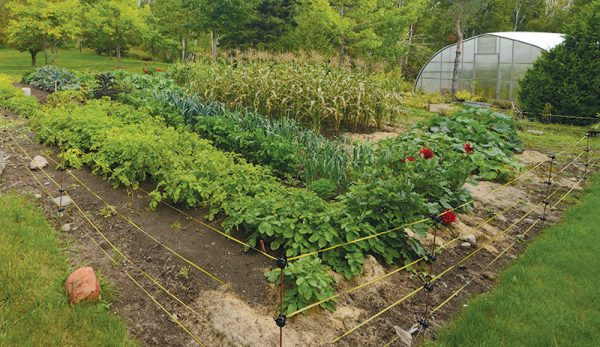 From rain-catchment systems to solar-powered electric fences, the off-grid garden is a great way to achieve low-impactâ€”and low-costâ€”food production or to simply grow vegetables in the middle of nowhere. However, growing situations differ, and what systems you can implement while gardening off the grid depends on many factors, including how much land you have, the size of your garden and local building codes as well as regulations on water catchment. This article offers an overview of your options, many of which can be easily implemented in gardens anywhere, regardless of whether the garden is a large commercial operation or a handful of raised beds behind the house.

Irrigating a garden with city or county water can be expensive. Finding your own water source can reduce your reliance on local water systems and save you money.

A 500-square-foot roof can capture aroundÂ 300 gallons of water per inch of rainfall. Thatâ€™s a lot of water from a fairly small roof, which is why, if you have any sort of structure with a roof nearby, or preferably uphill from your garden, then you have a water-collecting resource that should by all means be tapped. Gutters should be attached, with downspouts to go straight into barrels (described later).

If you donâ€™t have a structure with a roof, itâ€™s worth considering building a small shed for water catchment. This shed has to be neither large nor expensive, just something with good surface area for catching rain. Remember, 500 square feet will garner 300 gallons of water off 1 inch; thatâ€™s just a 50-by-10 lean-to, which in certain areas with sufficient water tanks can capture more than enough water for irrigation and be a nice shady place to escape the sun and keep some garden tools.

Of course, roofs arenâ€™t the only way to catch water. You also have the option of drawing water out of wells, creeks, ponds or springs. This water can be directly distributed into the garden or stored in water tanks. Either way, the question is how to move that water.

If your water source lies uphill of your garden, your task of drawing water might be significantly easier than drawing water from downhill. In the case of an uphill source, gravity can do a lot of the work usually required of gas or electricity. Tapping into an uphill pond or well, for instance, can be as easy as siphoning water down to the garden as needed or purchasing or building a hand pump for smaller gardens. For ponds especially, you might need to work out some filtration logistics, such as installing a filter at the intakeâ€”which you can build or buyâ€”but itâ€™s definitely possible.

If your water source is downhill from your garden, however, youâ€™ll need some form of energy to move it. Luckily, many creative off-grid devices exist for this task that require little more than wind or water.

Windmills can be bought or built for a few hundred dollars. Because they rely on the wind, itâ€™s a good idea to have a larger holding tank for when wind is low. Solar pumps exist or can be built, and pumps can run off the sun, but they are fairly large energy draws so they might require a larger solar system.

The ram pump is another brilliant device that uses the force of water to pump water uphill and can be either built for relatively cheap or purchased. What I like about the ram pump is that so long as the water source is flowing, so, too, is the pump. Unlike wind and sun, hydraulic pumps like this can run 24 hours a day, barring major droughts or freezes.

These types of pumps do often waste some amount of water in the pumping process so they should be coupled only with abundant water sources. They are generally reliable, though, and can move water hundreds if not thousands of feet uphill with the right setup.

If you will not be drinking the water, you can worry less about the potability of the tanks themselves so long as they have never contained harmful chemicals. When buying a tank, itâ€™s absolutely essential to know what it contained, if anything, before you acquire it. Donâ€™t purchase a tank that once contained broadleaf herbicide, for instance, if you intend to irrigate tomatoes.

How big of a tank you need depends on your situation and what you hope to use it for. If this will be your only source of water for a garden that is a source of income, consider getting a large tank of 1,200 gallons or more. Many crops require an inch of rain a week, so the irrigation equivalent of that can range from 10,000 to 30,000 gallons per acre depending on your irrigation system; sprinklers will use a lot more than drip irrigation. You might need a very large tank for a large garden.

Of course, if this tank is for irrigating a small family garden, anywhere from 30 to 100 gallons will probably suffice, and many small tanks or barrels can be linked together by a level pipe (called an overflow port) extending from the top quarter of one barrel directly to the next. Again, more arid places will probably need to retain water for longer and take more advantage of rain when it comes. Consider that.

Also important about the type of tank: It must be opaque. Clear or white tanks will encourage moss growth. You can paint tanks black or cover them to discourage sunlight. You also want the tank to be fairly sealed so as not to breed mosquitoes or to create habitat for frogs. Cute as they are, they will clog your pipes.

I also recommend burying at least part of the tank and placing it under tarp or shade to help keep it cooler in the summer. Remember that it can freeze in the winter, which might burst a tank, ruining it. So susceptible tanks should be drained before severe cold snaps. Some off-grid farmers might also build tanks by digging holes and lining them with pond liner. That can be a very affordable route compared with buying really large tanks.

Most overhead irrigation systemsâ€”sprinklersâ€”require a pounds per square inch of 60 or more. Drip irrigation is usually around 10 to 30 psi or as little as 8 psi in some cases. However, there are options for gardens with very low psi including sprinklers that can operate at between 15 and 40 psi. What you purchase depends on your needs and how much pressure your system provides.

You can calculate your psi in two ways. If you have an existing system thatâ€™s already connected with hoses and ready to use, you can simply purchase a psi gauge from a hardware store ($10 to $20) or borrow one.

If youâ€™re just now building a system, you can also calculate the potential psi if you know how far the drop from the source (a tank, perhaps) to the garden will be. The size of the tank doesnâ€™t change the pressure, itâ€™s the heights of it. So, for simplicityâ€™s sake, multiply the height of the tank at the top of the water by 0.433; a foot of water exerts a pressure of 0.433 pounds per square inch. This will get a close estimate of your psi when the tank is full. Subtract the height of the tank to know what the psi will be when the tank is low. I then take an average and use that as my psi.

For example: A tank 100 feet above your target area will reach a psi of around 43.3 (100 x 0.433). More realistically, a tank 20 feet uphill could render a psi of around 8.5, which could be used in conjunction with low-pressure drip irrigation.

Electricity isnâ€™t used a lot in the garden, but in the one area that it is, I definitely see an opportunity for off-grid systems: protecting the garden from deer and other pests.

For this, one doesnâ€™t need the electrical grid or expensive, 8-foot woven wire fencing. There are many different electrified fencing options depending on your pests, including wild boars, that can be set up and moved with relative ease and require little more than a solar energizer. The energizers can run a few hundred dollars, but I highly recommend the â€śsuitcaseâ€ť energizers. For eight years, Iâ€™ve used them for our livestock and gardens. They are dependable and easily moved.

A cheap deer fence can be built by setting up two different strands of electrified wire 4 feet apart from each other and at slightly different heights all the way around your garden. Deer have poor depth perception, and the two wires will deter them from jumping. Bait the wires with something they like, too, such as apples or peanut butter, so they will touch their noses to the hot wire and get a gentle reminder to stay away.

Greenhouses can be major energy hogs or, when designed correctly, major collectors of it. Here are a few ideas you can implement to make your greenhouse more efficient in terms of staying warm in the colder months and through the winter.

Ultimately, implementing some or all of these ideas will increase your self-sufficiency and save you a little money. Off-grid life gardening doesnâ€™t have to be a philosophy. Sometimes, especially when growing food, it can just be the practical choice.