Generators are good to have around, but they involve dangerous elements and can pose risks if they're not used properly. 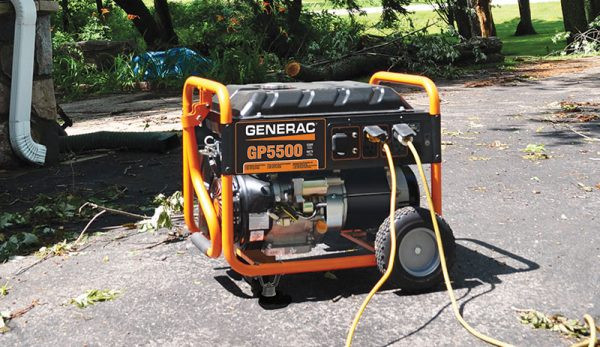 It‚Äôs a good idea to keep a generator on your farm in the case of an emergency, but with flammable fuel, electrical current and carbon monoxide emissions, running one can be dangerous. If you‚Äôre unfamiliar with using a generator, you or someone you know might have inadvertently used it in an unsafe way. Here are six mistakes to avoid making.

Carbon monoxide is a silent killer that can strike when you run any generator inside without adequate ventilation. It has no smell and is heavier than air, slowly filling the room until the people inside suffocate. All generators should be run outside or in a room with an open window or door and a carbon monoxide monitor. Have an electrician wire an outside outlet to the transfer switch to save running extension cords through windows or doors and to prevent temptation to use your generator inside.

2. Plug Into an Outlet or Inlet

Regardless of whether you purchase a portable or standby generator, install a transfer switch to prevent backflow into the outside wiring, as generators can electrocute anyone working on the power lines. A transfer switch should be installed by a licensed electrician and tested routinely.

Plugging into an inlet, which allows electricity to bypass the breakers and prevents wires from overheating, can also damage sensitive appliances and the house‚Äôs electricity. When too much current is run through the breakers, electrical fires can occur.

You would be amazed how often people smoke around flammable liquids and explosive gases. Smoking around generators can lead to a fire, singed hair and potentially a fatal explosion. If you‚Äôve spilled gas on yourself while filling the gas tank of a generator, avoid smoking until you‚Äôve changed and cleaned up, as well.

Nothing is worse than finding out that your wiring is incorrect, your fuel has gone stale or the generator is seized during an emergency. For fuels, such as gas and diesel, always use stabilizer if you are storing them longer than a few months. If using propane or natural gas, routinely check the gas lines for leaks to prevent an explosion and wasted fuel. To ensure the generator isn‚Äôt seized when you need it most, follow the manufacturer‚Äôs recommendations for oil changes and routinely run the generator.

Finding out your extension cord has bare wires can be shocking. Generators can create enough electricity to kill people, so ensure the electrical cords you use are in good shape and are rated for the amps that the generator produces. When buying a generator, look for one that has a built-in breaker to stop the current if there‚Äôs a short in an extension cord.

With modern appliances, you need to ensure that a generator produces clean electricity, measured as total harmonic distortion. The highest you want is 6 percent ‚ÄĒ any higher than that and your appliances might not recognize the power or the electrical circuits could burn out from a power surge. Often inverter generators, which convert the power to DC and back to AC, produce a cleaner power source for very sensitive electronics, but they cost more than standard generators. Another option for sensitive electronics, such as desktop computers, is an inverter run on a 12-volt battery or an uninterrupted power supply that will give you time to at least save what you are doing and close the computer down.

If you have any concerns about how to safely handle a generator, read the manual. It could save your life and the lives of others. Keep enough fuel on hand for a week‚Äôs run time, and you should be safely prepared for most power outages.

This story originally appeared in the November/December 2017 issue of Hobby Farms.