When it comes to construction, particularly remodels, surprises are part and parcel. That said, nothing could prepare me for a geyser in my front yard. 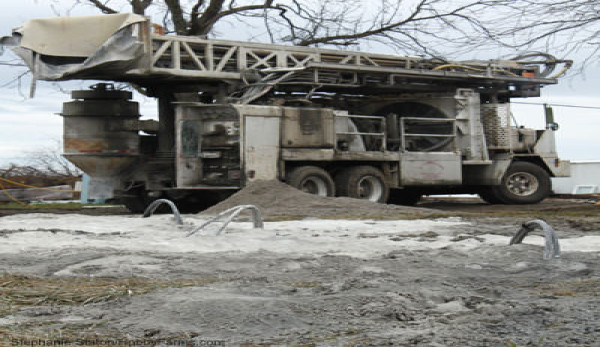 When it comes to construction, particularly remodels, surprises are part and parcel. That said, nothing could prepare me for a geyser in my front yard.

After picking up my son from school, we headed to the farm to see how the geothermal installers were progressing.Â Geothermal heating and cooling systems use the ground temperature to assist in regulating the house temperature, reducing the overall load on the central air unit in the house. We decided to install a geothermal system because it translates to lower monthly heating and cooling bills and it provides tax incentives and increased housing value in our neck of the woods. (This is not the case for all areas of the country.) Coils, which extract the heat from the ground, can be installed vertically or horizontally. We chose to install them vertically, as that orientation tends to be more efficient in areas with temperature extremes and for smaller acreages.

As we crested the hill leading to the farm, I was shocked to see water erupting 25 to 30 feet in the air, and even more surprised to find that it was coming from my front yard.

I thought perhaps the workers had ruptured a water line while drilling the holes for the geothermal coilsâ€”though Iâ€™d never seen one leak like this. Alas, I thought wrong. It turns out that the drill technicians hit an underground artisan well on our property. While they’ve had experience with such wells, they admitted that the highest theyâ€™d ever had the water shoot was about 3 feet into the air. The gases in the well cavity, which smelled very strongly of sulfur, created pressure that not only pushed the water 160 feet through the earth, but also propelled it an additional 25 to 30 feet in the airâ€”thatâ€™s a lot of pressure!

The solution: Let the water bleed out overnight and hope that they could get the lines to feed into it. The workers covered the geyser to prevent panic by passersby and went home for the evening. My son and I listened from inside the camper as the geyser whooshed to the surface every few minutes, eventually tapering off late into the evening. By morning, it was still gushing water but with far less noise, volume and force.

Unfortunately, the geyser delayed the geothermal installation for a full day, but the good news is that coiling the lines in water actually makes them more effective, according to the technicians. Rather than risk hitting another pressurized pocket, the drillers returned the next day and shortened the drilling depth, adding more lines to get the same amount of footage, with no further issues.

Despite our shock over the geyser, the artisan well was a rather exciting find that we hope will lead to good water sources for our future farming endeavors!

Stephanie Staton is a freelance writer who burns the midnight oil to meet deadlines between homeschooling her son and chasing her two horse-poop enthusiastic dogs around the farm. She and her family split their time living on the family farm and in an RV that moves with her husbandâ€™s work.