Geothermal Systems for Your Home

Tap into the Earth with the power of geothermal heating and cooling for your city abode. 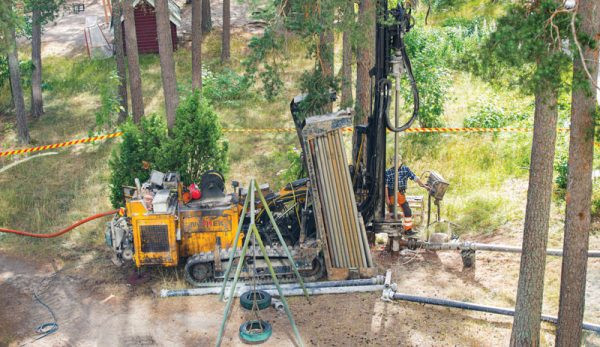 Vertical geothermal-system installations don’t require a lot of area, so they work well in urban and suburban spaces alike.

While the sun above may power your urban farm or grace you with a bumper crop of tomatoes on your rooftop, many urban and suburban residents are taking advantage of the ground below to heat and cool their homes. Just 6 feet below the surface is soil that remains between 45 and 75 degrees Fahrenheith year-round, regardless of where you live. Thatâ€™s why root cellars or underground caves are so efficient for storing food and why water pumped from the ground is refreshingly cool, even on the hottest summer day.

Geothermal heating and cooling systems, also called ground-source heat pumps, tap the consistent temperature of the Earth, transferring it through a series of pipes and heat exchangers to be redistributed to heat or cool a building. In the winter, geothermal heat pumps pull heat from the Earth. In the summer, these same pumps use the ground as a heat sink: a place to dump and dissipate heat. Many systems are connected to radiant floor heating, whereby a series of hot-water pipes that run through the floor radiate heat; such systems can provide an additional 40 percent in energy savings over regular forced-air heating systems. Geothermal systems can also be used for heating domestic hot water.

Geothermal systems can expand your self-reliance; reduce carbon-dioxide emissions by avoiding the need for natural gas, propane or other fossil fuel-based heating or cooling systems; and help you avoid unpredictable and often rapid increases in energy costs. Geothermal systems operate quietly and are remarkably compact. Best of all, unlike solar or wind-turbine systems, geothermal systems work everywhereâ€”under lawns, landscaped areas or even the driveway of your house.

The Most Efficient Way to Heat

Geothermal systems are also becoming more mainstream, making it easier to find a professional installer. â€śThere are between 1 to 2 million geothermal heat pumps installed in the U.S.,â€ť says Jim Bose, executive director of the International Ground Source Heat Pump Association. â€śAbout 40 percent of those systems are residential. The industry is growing at about 15 percent a year.â€ť

Thanks to federal tax credits of 30 percent and incentives available in many states, installing a geothermal heat pump system has never been more affordable. Many states and utilities also offer low-interest financing.

According to Janet Reeder with the International Ground Source Heat Pump Association, most homes can be retrofitted for a geothermal system using existing ductwork, though drilling the underground portion can become complicated (and more costly) due to obstacles that may be in the way of the drill, including tree branches and wires overhead and buried telephone cables and gas lines.

There are various geothermal heat pump heating and cooling system designs. Regardless of the type of design, the system employs a series of pipes, called a loop, installed beneath the ground surface to collect the heat (or coolness).

The most common closed-loop design involves a heat-transfer fluid of ecologically safe propylene glycol antifreeze solution in a closed-loop pipe system buried in the ground. The closed-loop pipes are usually made of high-density polyethylene with a 50-year manufacturerâ€™s warranty. The fluid in the buried pipes captures the heat and transfers it to the surface by electric pumps. A heat exchanger then transfers the fluid temperature to refrigerant.

Alternatively, direct-exchange geothermal systems operate with the refrigerant itself circulating through copper pipes buried in the ground. While heat transfer is higher and the installation sometimes less expensive, the direct-exchange system faces possible Freon refrigerant leaks, as acidic soil eats away at the copper piping over time. This can lead to costly repairs as well as damage to the upper atmosphere from the leaked Freon. As a result, most direct-exchange geothermal systems are not approved for installation in many parts of the country.