Geranium Budworms: A Troublesome Pest on the March

Missing flower buds could be a sign of geranium budworms on geraniums, petunias, zinnias, marigolds and other plants. Learn how to ID and manage this pest. 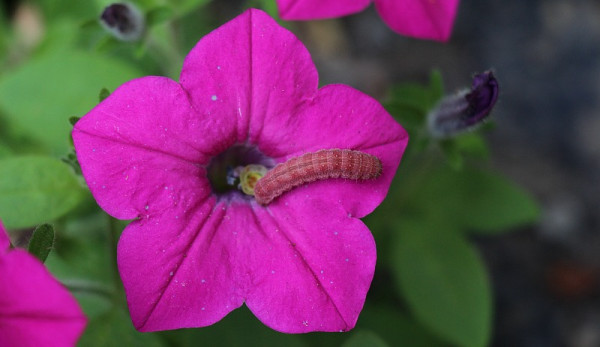 If you’ve ever stepped into your garden in the morning hours and discovered flower buds missing from your geraniums, zinnias, marigolds or snapdragons, your mind might first stumble onto deer or groundhogs as the perpetrator, but if there are no leaves or plant shoots missingâ€”just flower budsâ€”it’s more likely that geranium budworms (Heliothis virescens) are to blame. These persistent little pests are also quite fond of nibbling petunia petals into tatters and eating the buds right off of portulaca and ageratum plants, too.

What Are Geranium Budworms?

Geranium budworms are the caterpillars of a nocturnal moth. They’re also known as tobacco budworms because of their fondness for the buds of tobacco plants. Adult moths are light brown with three dark bands across their wings. The adults don’t harm garden plants and are often preyed upon by bats. Their caterpillars, however, love to feed on the developing buds of many different flowers and vegetables, including those listed above. The caterpillars can be yellow, green, brown, pink or even maroon, depending on their age and their food source.

Here in Pennsylvania, geranium budworms were once a very rare pest. Like many other pests sensitive to cold winter temperatures, geranium budworms would only migrate this far north toward the tail end of a warm, long summer. I would occasionally see one or two in late August or September, but seldom earlier in the season. However, over the past five or so years, there’s growing evidence that the geranium budworm’s range is expanding northward. By the time mid-summer rolls around here in Pennsylvania, I start to find the caterpillars and evidence of their damage. That’s about a month and a half earlier than before.

How Do Geranium Budworms Damage Plants?

Geranium budworm caterpillars feed primarily at night. During the day they can be found hiding along plant stems and leaf undersides, but if you go out to the garden at night with a flashlight, it’s easy to spot them nibbling on the flowers of host plants.

When geranium budworms are present in your garden, you’ll first notice holes in flower buds or buds that fail to open or go missing entirely. When the caterpillars are small, the damage is small, too, but as they grow, they’re able to “deflower” more and more plants per night.

How to Prevent Geranium Budworm Damage

To prevent geranium budworms, do not plant their favorite plants. Find substitutes, if possible. For example, plant less-susceptible ivy geraniums instead of zonal geraniums or grow Million Bells (Calibrachoa) instead of regular petunias. Livingstone daisies are a great substitute for portulaca.

If you do find they’re decapitating your annual flowers and handpicking isn’t effective or possible, organic pesticides based on Bt (Bacillus thuringiensis) will kill the caterpillars as they feed on sprayed foliage, without effecting pollinators and other beneficial insects.

Geranium budworms are more of a nusance than anything else. They very seldom outright kill a plant, but they sure do affect flower production and aesthetics.