These two herb garden mainstays share a name, but look and grow with distinctive characteristics. 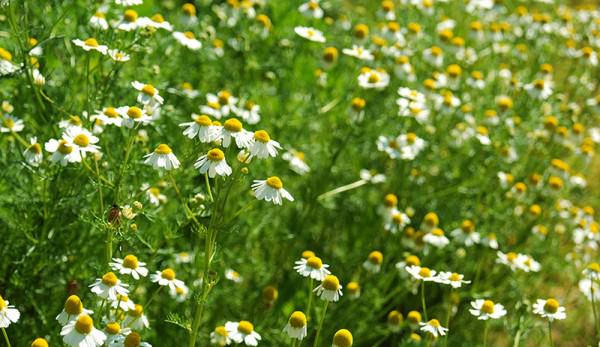 During farm tours, when walking past the chamomile beds, I have come to expect someone to ask me whether we grow German or Roman chamomile. That question will usually be followed with someone else asking me to explain the difference.

I have grown both of the plants that are commonly referred to as chamomile at one time or another, and I like aspects of both of them. Right now I have a lot of the German and not much of the Roman and that’s just because of a harsh winter a couple years ago. The two plants are in the same family, but after that, they have very little in common despite containing similar chemicals and appearing to have similar flowers.

German chamomile (Matricaria recutita) is a self-seeding annual in the Midwest. It grows from 6 inches to 2 feet tall. The leaves are ferny and delicate, and it has a typical aster flower, with a yellow disc in the middle surrounded by evenly spaced white florets. The flower smells like apples, and the essential oil derived from the yellow and white flowers of this plant is blue due to high levels of azulene.

Traditionally German chamomile has been used to calm, feed and soothe the nervous system and to support good digestion. You can use all parts of the plant in salads, though you might want to watch out for its bitter quality. They say that the longer you use chamomile on a daily basis, the more benefit it will give you. As a tonic, there are few reasons to avoid it, unless you happen to have an allergy to ragweed. Even then, there is only a very slight chance that someone might have a reaction, and it is most always a topical rash. I grow this type to harvest and dry for our medicinal preparations. It simply blooms more prolifically and makes my time picking worthwhile.

Roman chamomile (Chamaemelum nobile) is typically grown as a perennial, though it likes a warmer climate than I can give it here in Ohio. I’ve had it stay around for some winters—but not the really bitter ones. It is hardy to zone 5 and is a creeper, only growing to about 3 to 4 inches high. The leaves tend to be thicker and more substantial than those of German chamomile, and in my experience, so are the flowers.

This is the flower you want if you are putting together a chamomile “lawn” or wanting to plant in between your patio pavers. Most people that grow Roman chamomile in this way keep it cut short. Sadly, they miss out on all the companion planting benefits of this plant, as it attracts some great pollinators and beneficial insects. The flowers and the leaves of it also smell of apples, but while the essential oil of this plant is useful, it doesn’t contain high levels of azulene, so it’s a clear oil.

Roman chamomile has also been traditionally used for its calming and relaxing properties. It doesn’t bloom as much or as often as the German variety. It’s worth picking for a cup of tea for sure but I’m not sure I’d want to count on it to fill my herb jar.