The day before yesterday, a big flock of wild geese went winging south, way up in the sky. Mom shaded her eyes with her hand and watched them go. Then she sighed and went back to forking hay. 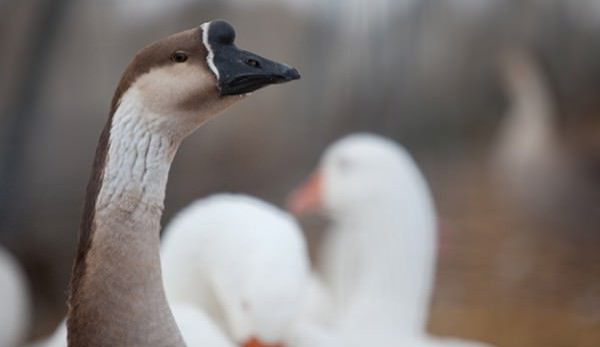 The day before yesterday, a big flock of wild geese went winging south, way up in the sky. Mom shaded her eyes with her hand and watched them go. Then she sighed and went back to forking hay.

I said to Uzzi, “I think she likes them. I wonder why we don’t have geese?”

Imbir’ the horse overheard me and started laughing.

“When we lived in Minnesota, we had two geese,ŌĆØ he said. “The gander used to race across the yard with his neck and wings outstretched, hissing. When Mom saw him coming she was scared and tried to keep him away. He’d lunge at her and whack her with his wings, and when she’d turn to run away, he pinched her butt.”

Uzzi and I looked at each other. We didn’t think geese sound like fun. So that night we crept in the house and booted up the computer. Here are some things we learned about keeping geese.

A gander is an adult male goose. Domestic geese mate in pairs or trios of one gander and two geese. Once mated, a gander can be very protective of his gal, especially during breeding season. That’s what was probably going on with Mom’s butt-pinching goose: He was telling Mom to stay away from his girlfriend. Mom should have left him alone until his hormones cooled downŌĆöor at least worn protective clothing so he couldn’t pinch. Ow!

Something humans do that upset some geese is hold out their hand as if to pet the goose. When geese are mad at each other, they snake their long necks out and hiss. Think of what a human’s hand and extended arm look like to a nervous goose. Don’t do that!

However, some geese are not very tame, and once they know a person is afraid of them, they hiss and attack just to keep the human in line. These geese aren’t much fun to have around, and they’re dangerous if small children are in the household, so it’s best to buy tame geese that like people right from the start. If you want tame, friendly geese, you can buy baby goslings and raise them yourself. If you do, it’s important to know what and how to┬Āfeed them so they grow up healthy and strong. If you hold goslings and speak to them, they grow up trusting people. Geese show affection by putting their faces close to one another. You can hold goslings close to your face to reassure them, but don’t try that with antisocial adult geese!

You should never raise just one gosling because a single gosling imprints with the human that cares for it. That means the gosling thinks the human is its mom. This is sad for the gosling as it grows up and can’t always follow around the human it loves, like into the house when the human goes inside. Even single adult geese sometimes bond strongly with human caretakers so it’s kinder to keep at least two geese. Then even if they’re the same sex and don’t have a mate, they do have a companion of their own kind.

Geese are a huge responsibility because they live a long time. According to the Guinness Book of World Records, the oldest goose that ever lived was George, a gander in Lancashire, England, who lived to be 49 years and 8 months old. Barring accidents, smaller breeds like┬ĀChinese and┬ĀPilgrim geese often live into their 20s and bigger breeds like┬ĀToulouse and┬ĀAfrican geese survive to their middle teens. Keep in mind that given a choice, geese mate for life, so you can’t sell one of a pair without both of them being terribly sad.

We decided geese sound pretty cool, but the way Imbir’ laughed when he remembered Mom’s Minnesota gander chasing her down, I don’t think we’ll be getting geese anytime soon.