Get Over Your Fear Of Bee Stings

The fear of the sting can keep many potential beekeepers away from the hobby - but don't let your worries get in your way. Stings aren't all bad. 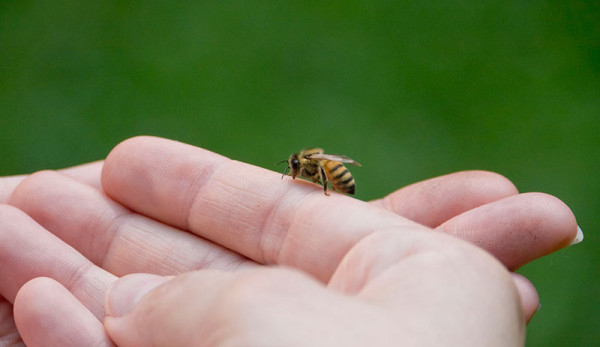 Many people keep their distance from bees because of a deeply rooted fear of getting stung. That’s understandable! I wasn’t stung by a honeybee until I was well into my 20s (and had become a beekeeper) because honeybees did not live where I grew up. Even though I had been stung by other stinging insects and wasps, nothing had quite prepared me for the firm jolt of electricity that was a honeybee sting. Whether or not you know what’s coming, fear can almost always be assuaged by a bit of knowledge.

Not All Bees Can Sting

You may know by now that honeybee queens do not use their stingers like workers do; the honeybee virgin queen uses her stinger once, and only once, to eliminate the competition of other potential queens immediately after she hatches. Drones don’t even have a stinger, so no worries there. As worker bees age, their stingers develop, thus being able to “graduate” to a new role in the hive, such as guard bee or forager, both roles that require some defenses. However, the vast majority of the bees in a hive have undeveloped stingers and pose little to no threat to you. They’re nurses, caretakers, morticians and janitorial bees, among others.

Honeybees Don’t Want to Sting You!

Stinging you is an absolute last resort for a honeybee. After all, she knows she’ll meet her maker once she stings. After a honeybee stings an adversary, her stinger is left in the victim. As she flies away, the stinger is torn from her abdomen, and she dies shortly after, but not before making a big stink by buzzing you and charging you mid-air. It’s easy to read her signs before a sting occursâ€”she’ll fly at your face, likely with several of her sisters, and the area will feel highly charged and agitated. As you spend more time around bees, you’ll come to know their warning signs that a sting is imminent.

Fatal honeybee allergies, known to cause anaphylaxis, are not as common as many believe. Some people have this true honeybee allergy, and unfortunately, it’s best that they not become beekeepers. Others, however, have little to no reaction at all. Very mild reactions include redness at the sting site and, of course, pain. Most swelling goes down within a few hours. Some folks fall somewhere in between, experiencing more pronounced swelling and the temporarily inability to use the part of the body where the sting occurred. Allergists say that those people have a “sensitivity” to stings, but are not allergic.

An adult human without a fatal honeybee allergy can withstand an average of 10 stings per pound of body weightâ€”that’s at least 1,200 stings, which is quite a hefty number. Beekeepers taking precautions to avoid stings and to protect themselves with the various methods available (wearing protective gear, using a smoker, being mindful while inspecting hives, etc.), are highly unlikely to experience this number of stings.

If you’re venturing into the world of beekeeping, know that you will get stung. Even though there are ways to significantly reduce stings, they will happen. Going into it knowing this is often very helpful for new beekeepers. It’s also helpful to know what to do after getting stung. To reduce the amount of venom entering your bodyâ€”and thus reduce your reaction to the stingâ€”it’s imperative to get the stinger out as quickly as possible if you can reach and locate it. Even a few seconds can make a world of difference, asÂ the abandoned stinger continues to pump venom into the skin. Don’t try to pull the stinger out, though. Instead, use your fingernail to scrape the stinger out.

Stings are part of life with honeybees. Work towards avoiding stings because the same precautions that prevent stings also prevent unnecessary honeybee stress and deaths, but don’t fret when you do get stung. Consider it a warning and a message from the honeybee. What were you doing when you got stung? How were you not serving the honeybee or not taking care of yourself?Â ThenÂ use that informationÂ as a way to improve your honeybee management for the future.