Get These Pests Out Of The Chicken Coop

Lice and mites are two microscopic predators that could be causing problems for your chickens. 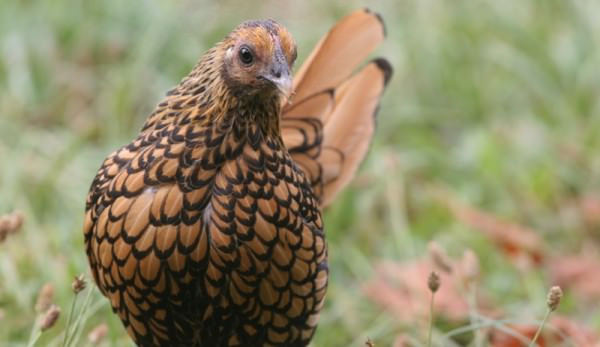 When you think of chicken predators, itâ€™s likely that pointy teeth, fast legs, long talons and razor sharp claws come to mind. You might even conjure up beady eyes, long wings and furry tails. But rarely do we think of the nearly microscopic predators that feast on your chickens, just as much a predatorâ€”and a dangerâ€”as a weasel, fox or raptor may be. Letâ€™s take a closer look at the unassuming, microscopic twin terrors known as lice and mites.

There are two main categories of lice: bloodsucking, which target only mammals, and chewing, which target mammals and birds. Of the chewing kindâ€”the ones to be concerned with as a chicken keeperâ€”there are several varieties that attack chickens. They are species-specific, meaning theyâ€™ll only infest chickens, and not, say, turkeys or ducks.

These parasitic insects live on and chew the skin of chickens. For their tiny size, poultry lice can make life pretty uncomfortable for your birds. A lice infestation also has some undesirable and very frustrating consequences, which weâ€™ll investigate in more depth later on.

This tiny predator is a relative of the tick, resembling small spiders. At less than 1/25 of an inch, this parasite can wreak havoc on a chickenâ€™s skin, feathers and immune system. There are several varieties of mites; most live on the body of birds and survive by chewing skin or feathers, or sucking their blood. Some types may even burrow through the skin into the body of the bird.

Some mites are easier to spot with the naked eye (and fast reflexes) than others. The most common mite in backyard flocks on the North American continent is the red mite. Also called poultry mites, roost mites or chicken mites, these buggers make their home on the flockâ€™s roosts, coming out at night to suck blood while the birds sleep, changing from gray to red in the process. Populations can explode in warm climates or the heat of summer in Northern climes.

How do you know that lice have infiltrated your harmonious flock life? Look for subtle changes in any individual birdâ€™s behavior. Is one hen looking a bit dull? Has she stopped laying and seems a bit droopy or restless, even if no big changes or events have occurred?

A lice infestation may result in lowered fertility and decreased egg production, feather damage, lack of restful sleep and decreased appetite leading to malnourishment. A resulting weakened immune system is common, and this leaves your flock susceptible to diseases and internal parasites. Lice and nits may be visible on your birds at the feather shaft, or you may simply notice your chickens shaking their heads or scratching their ears in irritation.

Sometimes, mite problems look similar to lice problems, for better or worse. When mites make a home in your coop (and on your chickens), birds may present their illness to you with an increased appetite but lowered egg production.

Check also for feather damage and anemia. Very weak birds, such as tiny chicks, may die or fail to thrive from a heavy infestation. Chickens who are heavily infested will often pluck out their own feathers in an attempt to stop the irritation of being bittenâ€”so you may see featherless areas on a birdâ€™s body, or bare skin, bloody spots or scabs on suffering birds. Red mites may be visible as tiny, red specks on the chickens or roosts at night, but you have to move (and look) quickly as they scurry away from the light.

What You Can Do About Them

Proper coop management and cleanliness is paramount in preventing mites and lice from getting a foothold in your flock and spreading among your birds. Practice good biosecurityÂ by:

There are poultry-approved insecticide powders that can be used to treat adult liceâ€”not nitsâ€”over the course of several weeks and multiple applications as the nits hatch. Diatomaceous earth is a relatively safe alternative, but its use will take several more applications over a longer period of time to be effective in the coop and around the flock.

As a natural chicken keeper as well as a beekeeper, I look for other solutions. Mites, thankfully, are environmental, and so theyâ€™re easier to manage or eradicate: Thoroughly clean the flockâ€™s housing, focusing on cracks and crevices and apply diatomaceous earth throughout. Treatment can be time-consuming, physically taxing and stressful on your birds, but itâ€™s possible to beat them.

As always, if you can take a few simple precautions to keep your birds in excellent health, theyâ€™ll be able to fight off mites and lice without too much assistance from you. Just set them up for success: Offer them high-quality, organic feed; always have fresh, clean water available; and supplement their diet with ample free-range time, sunlight and exposure to grass, where they can move, exercise, flap their wings, hunt for bugs and generally just be happy chickens.