Kallie Sizemore of Quarter Acre Farm tells us how her chicken-focused farming adventure has become a form of beneficial growing therapy. 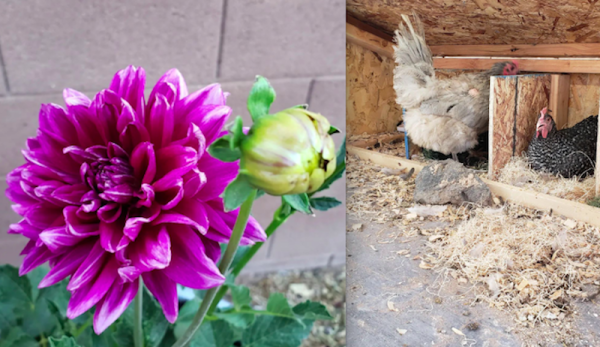 “I literally woke up one day and got chickens!” says Kallie Sizemore of Quarter Acre Farm when asked how she originally became interested in hobby farming. “But deep down I know there’s more to it.”

Since Sizemore’s breakthrough chicken moment, she’s gone on to build up Quarter Acre Farm. Along with chasing rainbow egg dreams, the venture also acts as a form of growing backyard therapyâ€”a situation that came about out of necessity when Sizemore was diagnosed with rheumatoid arthritis.

Taking a moment out from farm duties, we spoke to Sizemore about getting acquainted with chickens and the appeal of her Silkies. We also dug into the idea of hobby farming as a beneficial form of therapy.

Focus on the Chicks

Recapping the poultry-focused nature of her farm, Sizemore says she originally “bought four chickens and three were roosters. I had no clue what I was doing.”

Undeterred, Sizemore embarked on a quest for poultry knowledge.

“I dove in and learned, researched, joined groups, visited farms and of course [there’s] Instagram,” she says.

“After seeing how many breeds there were out there, I was hooked,” recalls Sizemore. “I soon had to have every chicken on the planet, which was impossible with my quarter acre.

“So I just try to make the most with what I can have here.”

Read more: Showbiz chickens? Here’s how to get your birds into the spotlight.

Silkies have become the star of Quarter Acre Farm. Sizemore says that she just finds the breed fascinating. “They appear dumb and silly but I think they are truly very smart. But they’re easily spooked, to sum it up.”

The bio to Sizemore’s Instagram account includes the line “growing backyard therapy.” It’s a development that came about when she was diagnosed with rheumatoid arthritis.

“I felt like my body was failing me, [and I] also lost my dad,” she recalls. “But for some reason my backyard became my sanctuary, my heaven, my therapy. It gave me purpose again.”

Keep Your Hands in the Dirt

“To some it’s just a strange hobby, but to me it’s my whole world,” says Sizemore, reflecting on what her farming journey has meant to her so far. “It’s hard at times, and there are days I’ve wanted to quit. But the challenge of it keeps me going”

Sizemore adds that her latest passion is growing dahlias. “They are truly unique,” she explains. “I was once told it’s hard to be mad when your hands are in the dirt. Grandma Lucy said it. I never met her but she’s right. It’s therapy.”