Our sheep were supposed to get shorn today, but it rained last night so now they can’t. They’re relieved and upset at the same time. They don’t like to be caught and rolled into all those weird positions, but they say it’s nice to feel the cool breeze on their skins afterward. 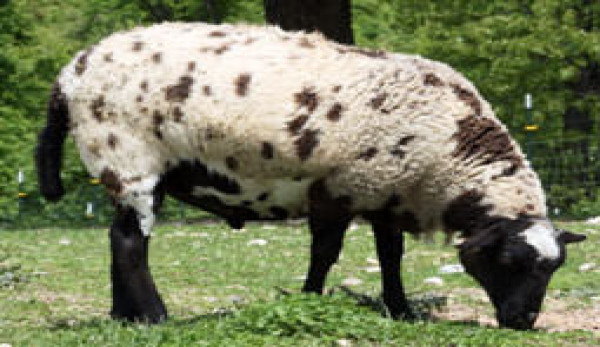 Our sheep were supposed to get shorn today, but it rained last night so now they can’t. They’re relieved and upset at the same time. They don’t like to be caught and rolled into all those weird positions, but they say it’s nice to feel the cool breeze on their skins afterward.

I talked about shearing sheep last year, but I didn’t mention why it must be done. Most sheep’s fleeces—except for double-coated British and Scandinavian breeds like Shetland sheep and Soay that roo, or naturally shed their wooly undercoats—keep growing until you cut them off. If you don’t, those sheep are in trouble.

Arthritic sheep, obese sheep in late pregnancy and sheep with extra long fleeces sometimes get cast. That means they lie down in the usual way but somehow lose their balance and roll up onto their sides or even on their backs. Because they’re so stiff or fat or their fleeces are so thick, they can’t get their legs back under them to set themselves up again, so they’re stuck with their legs stuck up or straight out to the sides.

Remember when I talked about ruminants’ stomachs? Our rumens are huge and  heavy, and when a sheep is cast, its rumen presses hard against its lungs. Unless someone comes along and helps the sheep up, pretty soon it can’t breathe and it suffocates. This is not an unusual occurrence. Our granny sheep, Rebaa, died when she got cast late at night and no one found her until morning.

Unshorn sheep can also die from heat stroke, a dangerous problem when it’s extra hot and humid outside.

And, a long, ragged fleece is miserably itchy. Can’t you just imagine? I can!

So, it’s off with our sheep’s fleeces, except for Mopple. He gets to keep his fleece. That’s because he’s 75 percent Dorper and 25 percent Katahdin, two types of hair sheep called “shedders,” which grow short wool that naturally sheds in June or July.

Some kinds of hair sheep don’t grow wool at all; they have hair all over their bodies. That’s what all sheep looked like until ancient humans began selecting sheep for longer wool and a tendency not to shed. That way all of their wool could be harvested at one time instead of rooing it (combing or picking it off by hand) over a period of several weeks’ time.

Our shearer, Paul Ahrens, rescheduled our sheep’s haircuts until next Saturday. The sheep heaved sighs of relief. But Mom will be watching extra closely to make sure no one gets cast. She’ll be really, really glad when the shearing is done.