Getting Started: Chick Issues & What To Do

There are a few common chick issues you may encounter while brooding your babies, so keep an eye out for these conditions and be ready to act! 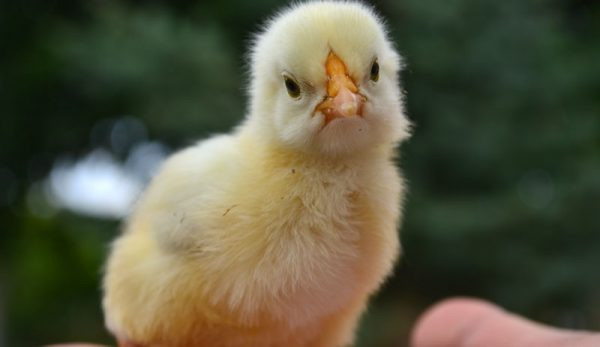 Every activity comes with risks. Chicken keeping, unfortunately, is no exception.

While most of the crises that occur in flocks happen after a hen attains adulthood, conditions do exist that afflict the youngest of birds. And they can downright unnerve those new to poultry ownership.

Rather than panic, prepare yourself by learning to recognize these four chick issues that can affect your birds.

Why Is My Chick Doing the Splits?

As your peeps become more active and start exploring their brooder, you may notice that one of your little guys is having trouble getting around. His legs splay out in different directions instead of staying directly beneath him.

Even if he’s just standing still, his legs start slipping out like a rag doll.

This condition, one of the more common chick issues, is called spraddle or splayed leg. Because it prevents a chick from reaching food and water, spraddle leg must be treated immediately and before the chick completely loses his mobility.

Treating spraddle leg in its early stages is relatively simple and can be accomplished with common household items. Scientists believe spraddle leg is caused by improper incubation conditions, which inhibit the proper development of leg muscles. Slippery floor surfaces during the first few weeks of life can contribute to spraddle leg. So be sure to offer newly hatched chicks a floor surface with traction, such as paper towels, ribbed shelf liner or burlap.

Read more: Read more about spraddle leg and what you can do to help.

Why Does My Chick Constantly Look Upward?

It’s that chick again, the one you find yourself rescuing from issues over and over again. You always find him flat on his back, unable to right himself. This time, as you stand him back on his feet, you notice him craning his head skyward, as if looking for constellations.

Within seconds, the weight of his head tips him over and he’s on his back once again, unable to move. This poor chick is suffering from torticollis, also called wry neck or stargazing.

A chick with torticollis tilts his head upward or, in severe cases, backwards or twisted to the side. Multiple factors can cause torticollis, including:

If your chick is in the early stages of torticollisâ€”not yet tipping onto his backâ€”you can treat him by adding Vitamin E and selenium supplements to his feed.

You will need to hand feed him, since affected chicks cannot eat or drink for themselves. Isolating him is vital, since the chick’s brooder mates might trample him.

Keep a stuffed toy with him for company. Continue the supplements for several weeks to ensure the condition does not recur.

Why Is My Chick Curling Its Toes?

As your chicks start to run around, you may notice one baby tottering with a slight limp. This chick may also have trouble scratching, an activity his brooder mates have already mastered.

When you examine him, you notice that one or more toes are curled under or to the side, causing the difficulties this particular peep experiences. This condition, called curled or crooked toe syndrome, occurs when a brooder floor is too slick or kept at the wrong temperature. Vitamin deficiencies, improper incubator conditions and genetics may also be to blame.

The degree of crookedness varies from a gentle side bend (similar to a banana) to acute and completely curled under. Crooked toe can manifest as early as 1 week of age. Approximately 3 to 5 percent of baby chicks suffer from this condition.

Fortunately, crooked toe is one of the more easily treated chick issues. You can craft custom “chick booties” from materials readily found at home. The earlier in a chick’s life crooked toe is treated, the better. Toe joints can stiffen, causing the toes to be permanently curled in older juveniles.

Read more: Need to make some “chick booties”? Here’s how!

Why Is My Chick’s Beak Scissoring?

Although he seemed perfectly fine for the first couple of weeks of life, one of your chicks now exhibits a distinct facial deformity: his lower beak no longer fits neatly into his upper beak.

Instead, it has shifted laterally. The poor peep’s mouth now resembles the blades of a stubby pair of scissors. The baby can still eat and drink. But, because of the overlapping position of his beak, he is unable to take in the same amount of food as his brooder mates. As a result, they have started to outpace him in growth.

This condition, called scissor or crossed beak, is defined by a sideways deviation of the upper or lower beak. Scissor beak may be caused by genetics or improper incubation conditions. If detected in its early stages, scissor beak can be corrected by applying gentle but firm counter pressure on the misaligned beak for approximately five minutes, two to four times per day.

If left untreated, scissor beak can lead to malnutrition, abnormal organ development and death. However, some affected birds do learn to compensate by feeding and drinking with a scooping technique.