Getting Stink Bugs Out Of Your Home

Not just a garden pest, the brown marmorated stink bug can be a nuisance around your home, as well. 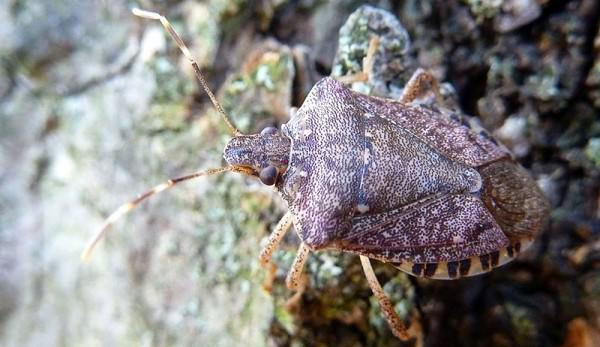 Many folks are certainly aware of the invasive brown marmorated stink bugs, whether or not they have gardens, as theyâ€™re easy to spot around the home during the winter. The pest is particularly successful due to the absence of natural predators in North America and an abundance of suitable food sources but also because of its ability to survive cool temperatures. It does this in two ways:

In the fall, these Asian stink bugs search for protected warm shelters to survive the cold winter. Some of the best shelters happen to be our homes. When the stink bugs find such a location, they release a chemical aggregation pheromone that attracts fellow stink bugs to that are, which accounts for the vast numbers of these insects often found in one place.

The only preventative measures that are truly effective in keeping brown marmorated stink bugs out of your house are to make sure all exterior openings are tightly sealed and any small cracks or crevices are filled with caulk. This is especially challenging for older homes. Gaps in the clapboard, old window frames and cracks in stone foundation can unfortunately let in hundreds of eager stink bugs every fall.

You may also see pest control companies advertising exterior spraying services to help prevent large infestations of stink bugs. These treatments can be somewhat effective if youâ€™re not opposed to broad pesticide applications. However, the advertised efficacy requires pesticide applications to be timed perfectly with the arrival of the insects, as exterior pesticide treatments tend to wash away rather quickly.

Luckily, overwintering stink bugs donâ€™t cause any true damage to the home, though they are especially smelly when disturbed. In heated structures like your house, the stink bugs do not truly hibernate and are often quite activeâ€”roaming around until spring, when they attempt to reemerge. The best solution for dealing with the insects already in your house is vacuum them up and release them outside. For homes with a huge population of these invasive pests, I strongly recommend using a separate vacuum cleaner just for collecting stink bugs, as their scent is nearly impossible to remove from appliances.