Getting The Most From A Fall Raised Bed Garden

Advanced preparation and the right combination of veggies can make for a bumper harvest. 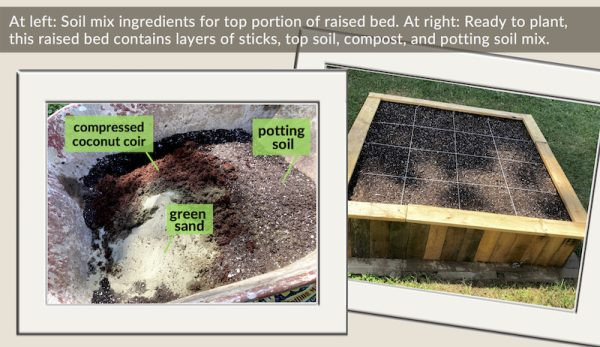 Although I have a large, fenced in garden, I wanted to give itâ€”and myself!â€”a rest this fall. Of course, I also still wanted access to the freshest, home-grown carrots, lettuce, beets and other cool-weather crops.

To that end, I just put in a new raised bed made from reclaimed pallet wood. (For the sake of food safety, I made sure to use only heat-treated wood and finished it with plain flaxseed oil.) The raised bed is close to my house and rain barrels, so I shouldn’t have to work as hard to care for it.

The 16-square-foot space is also small enough that I won’t need to spend hours weeding or cultivating.

Read more: Disassemble pallet wood to save money and resources on your raised bed project!Â

That’s not to say that putting a fall garden in a new raised bed is effortless. Several factors can influence the quality and quantity of produce I’ll be able to coax out of the small space. First, I located it in a spot that gets at least six hours of sun daily.

As important, I’ve taken real pains to keep nibbling critters out. Before I filled the 1-foot-deep bed, I put down a thick layer of cardboard. Then I used landscaping pins to secure two sections of hardware cloth. This should keep burrowing animals from accessing the garden from below.

To facilitate drainage, next I filled the bottom 5 inches with dead tree branches and dried-out plant stems. (I’d been saving these to shred and add to my compost pile, but I had plenty of extra material.) Then I added a few loads of plain garden soil. After that, I mixed in a couple loads of finished compost.

Although it’s not always easy, I’m no longer relying on peat moss. So, I filled the remaining few inches of my raised bed with a peat-free mix.

Read more: Say goodbye to peat moss with these alternatives.

Plenty of veggies can tolerate fall’s cooler temperatures. Some of these include beets, broccoli, cabbage, carrots, cauliflower, chard, kale, lettuce, peas, and spinach. And, with fewer insect pests around, fall is a good time to grow some of the trickier ones.

For instance, in the spring, the flea beetles invariably find my broccoli. I’ve had better luck with this particular crop during the fall.

Since the first average frost in my area is still a few months away, time-to-maturity wasn’t too big a factor. I would have enough time to grow most any fall crop. However, I focused on growing vegetables I actually likeâ€”especially super-sweet carrots and sugar snap peas.

I also chose many cut-and-come-again types, so I can enjoy ongoing harvests of spinach, kale, Swiss chard and assorted lettuces.

In deciding what-goes-where, I turned to one of the gardening classics on my bookshelfâ€”Mel Bartholomew’s Square Foot Gardening. The original work is more than 40 years old, but it’s had real staying power.

The author suggests dividing four-by-four beds like mine into 16 1-foot-square sections. Then, he recommends intensively planting each section with specific numbers of plants. In part, the different plants’ growth habits and mature sizes dictate their total number and arrangement per square.

Once filled in, each block of mature plants should be able to shade out potentially competing weeds. This further reduces the need for maintenance.

Since mature broccoli, cabbage and cauliflower plants require more space, these are strictly one-per-square, according to Bartholomew. But, in the case of carrots, radishes and even beets? He suggests planting 16 of these per squareâ€”in four rows of four evenly spaced plants. 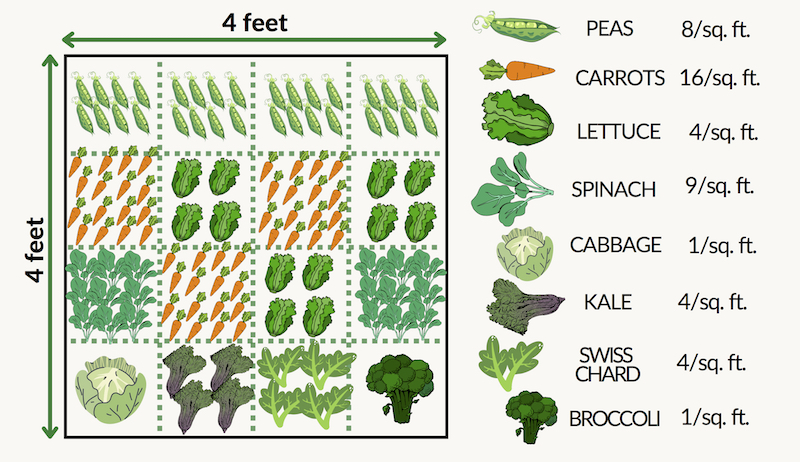 To maximize the fall harvest, I planted my 16 blocks in peas, carrots, lettuce, spinach, cabbage, kale, chard and broccoli. (See accompanying image above.) I added a trellis just behind my raised bed to accommodate the sugar snap peas. With proper support, these vines can reach up to 8 feet high.

At eight pea plants per square and four squares in all, that’s 32 pea plantsâ€”and a lot of potential peas!

I also allotted three squares for carrots. At 16 carrots per square, that’s 48 carrots. (Not to mention my ability to succession plant more carrots upon harvest.)

There is also one square for a single cabbage and another for a single broccoli plant. In all, the space fits an impressive 120 plants.

That said, though, I won’t harvest much if deer, birds or rabbits get to my raised bed before it’s established. The fix? I added a few extra supports and topped the whole thing with heavy netting.