Ghostly Paperwhites And Their Spooky Story

Incorporate these daffodil relatives as a haunting feature in your Halloween displays. 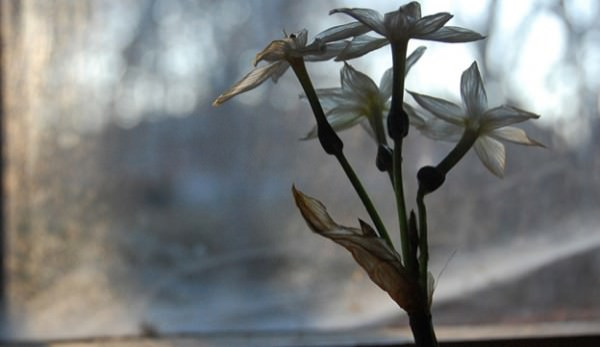 My children are very excited that the calendar has turned over into October. Theyâ€™re lobbying daily to get the Halloween decorations out of the crawl space, but Iâ€™m not sure Iâ€™m ready to look at all the spooky pumpkins just yet, so weâ€™ve begun instead to look for Halloween activities to keep them happy.

Yesterday we visited the Franklin Park Conservatory, a botanical garden and conservatory in Columbus, Ohio, which had a number of exhibits kicking off the fall harvest season. We stood for a while and watched a group of artists carving pumpkins and got inspired to go well beyond the common jack-oâ€™-lantern faces we normally do. Next we toured an exhibit of hand-blown glass pumpkinsâ€”the conservatory houses quite a collection of Chihuly, so glass pumpkins are entirely appropriate.

My favorite part of the day was touring the “scary plantâ€ť exhibit, an homage to a haunted greenhouse. Plants with carnivorous habits and bad reputations were on display, and many people gathered to see the dark side of propagation. I took a few pictures, especially enjoying the black bat flower.

I wondered at the choices for the exhibit. I know quite a lot more plants that are associated with spooky stories that would have been a better fit. So Iâ€™ve decided for this whole month Iâ€™ll devote my entries to some of these plants. First up: paperwhites (Narcissus tazetta).

Flower Of A Narcissistic Prince

Paperwhites are typically seen in the winter, when people force the bulbs for holiday displays. Itâ€™s the first flower that comes to my mind when I think of the name Narcissus, though this genus of flowering plants includes quite a few spring bloomers, such as the daffodil. All of the flowers, regardless of species, tend to come in the same shape, with a tubular projection out front and five petals behind, fanned out in a sort of ruff. The flowers often tend to nod, which goes nicely with the Roman poet Ovidâ€™s tale of their origin.

The story goes that Narcissus was a young and handsome man that would walk through the woods where a nymph named Echo lived. She fell madly in love with him, but due to a curse put upon her, she could only repeat back what he said. Her attempts to woo him made the very woods around the vain youth seem to support his self-appreciation. He finally became so enamored with himself that he sat down beside a small pool so that he could gaze at his own perfection. His vanity was so complete that he spent his remaining days trying to embrace his own image rather than eating and wasted away to nothing. I am not sure which god or goddess it was that would have taken pity on Narcissus and allowed him to be immortalized, but it is said that where he died is the place that the narcissus flower first sprang from the earth.

A Plant To Be Wary Of

The Narcissus genus has a long history of being used medicinally. We see the bulbs of the plants mentioned by Dioscorides, Pliny the Elder and Hippocrates. They were used both topically and internally for what is believed to be cancerous conditions. Like many other plants that are used in this way, the phytochemicals are strong and dangerous to use when placed in the wrong hands.

While the bulb is known to be incredibly toxic, it can be very difficult to overdose if you were to eat them. They are reputed to be very bad tasting and so you donâ€™t tend to overdo it on accident. Nonetheless, plants in the Narcissus genus are not a safe to add to our casseroles, and I think this adds to the mystique. On a positive note, evidently there are some great indications that the plants can be useful in some of our modern degenerative diseases, such as alzheimer’s, when synthesized into pharmaceuticals.

The ghostly, white blooms of the paper white always remind me of Ovidâ€™s story. They donâ€™t seem cheery to me, but rather a bit sad and creepy showing off in the middle of winter when they are supposed to be resting below ground. I think they would make an excellent addition to a spooky halloween display, but then, Iâ€™m a self-proclaimed plant nerd.