Gilly Farm Is Making A Difference In The Local Community

De Gillies from the Ontario-based hobby farmstead she founded with her husband takes us inside the day to day running of Gilly Farm, their labor of love. 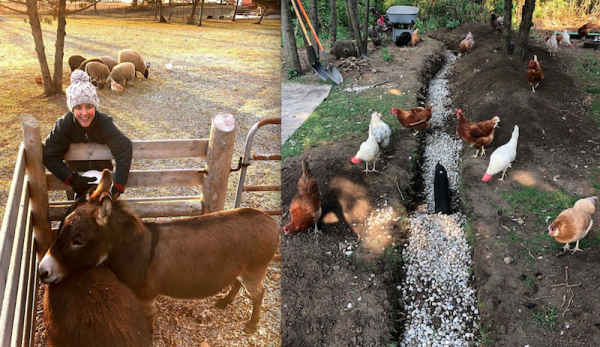 Based in Ontario, De and Greg Gillies run a hobby farmstead they call Gilly Farm, named in honor of the original pig Gilly that kickstarted the venture. Situated over four acres, the steadily growing enterprise has expanded to include a cast of pigs, sheep, donkeys and chickens, many of which were rescued from unfortunate situations and can now be seen living happily via the farm’s Instagram account.

“Working on a shoestring budget can be a challenge at times, but it’s also a huge blessing,” says De Gillies of their labor of love. “It keeps us practical and mindful of what and how we spend our money.”

We spoke to De Gillies about the roots of her hobby farm and the challenges of running Gilly Farm during the frosty Canadian winter months. We also dug into the joys of feeding a local community with home-grown produce.

When it comes to starting a hobby farm, Gillies says that one of the biggest issues is what she calls “our F-word here on the farmâ€”fencing.” She says it’s been a seven-year process of building and moving fencing. “We are currently expanding and putting in more fencing but it never stops.

“It’s not so much of an obstacle as a chore to make sure it works for all the different sizes of animals we have,” she adds. “I can still be found trying to chase a chicken out of the vegetable garden because they can clear a six-foot fence!”

Click here to learn about the fundamentals of farm fencing.

This is princess Horge (aka Bubba) stealing all the stove heat. This is a throwback to when the pigs used to live in the house. PS, sometimes Bubba still sneaks inside to help me make dinner or a snuggle on the couch? I thought I would contribute a photo for #woodstovewednesday . . A clever hashtag by @hostilevalleyliving . . . #potbellypig #pigsofinstagram #woodstove #petpig #minipig #teacuppig #pig #gillyfarm

When asked which of Gilly Farm’s resident animals has the most outgoing personality, Gillies says her husband immediately suggested a pig named Bubba (who also goes by the alias Princess Horge).

“Bubba is my perfect example of anthropomorphism,” she says. “Bubba is bossy, pushy, independent and only thinks of herself. If she could snap her fingers at me, I’m sure she would. But she also loves snuggling, swallowing baked goods whole while chasing it with a liter of water and randomly running and spinning around the yard because she knows spring is coming.”

Gillies adds that as the only female pig on the farm, “I believe she has earned her right to be a diva.”

The Power of Produce

I never have luck with spinach in the spring but spinach in the fall is my happy place? Harvesting today in my toque and insulated bibs?? . . . #spinach #growyourownfood #eatmoreplants #westcoastseeds #wintergreens #forksoverknives #garden #gardening #fallgarden #marketgarden #harvesting #fall #autumn #farmher #homestead #farmstead #eatyourgreens

“Most of our seasonal dinners come from only feet away from where we grew them,” says Gillies, talking about her commitment to growing produce to feed their family and immediate community.

“We also sell some of our produce locally and are very rewarded with the ability to share good food with people who appreciate it. I’m a strong advocate for the food-is-medicine adage, so if I have the power to feed and heal my family and animals with food, then perhaps there is nothing more important than that.”

Today, dad brought the laser over to make sure the grade was sloping for good water flow! I took the honours of hand shovelling 3000lbs of gravel myself and I'm already feeling the consequences in my back ? But a hard days work pays off if the barn stays dry in the spring ?? #earnyoursupper

During the cold Canadian winter months, Gillies says that maintaining the farm winds up being a physical challenge. “Clearing snow around the barn for the critters can be a challenge, but that’s my workout for the day,” she says. “We do not have water in the barn, so twice a day I take two five-gallon buckets full of hot water to the barn to make sure they constantly have clean and warm water.”

Gillies adds that the day-to-day running of a farm always seems to take longer during winter weatherâ€”although “nothing teaches patience like winter on a farm!”

Get Motivated to Start Your Own Hobby Farm

“We need more small, sustainable hobby farms in this world,” says Gillies. “These farms will be our saving grace in the future. It takes a certain mindset of wanting to grow and learn and even revel in the art of failure sometimes.

“Living a simple life on a homestead is attainable on a small budget. Start with a garden, then maybe add some chickens and see what happens. If you ease into it and grow alongside your farm, it will reward your efforts.”