For the holidays (or any day) try the spicy comfort of this yeast-doughnut variation. 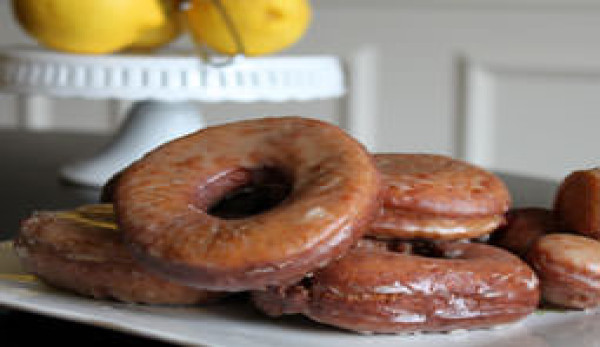 Make these as regular doughnuts dipped inÂ Lemon Glaze or go all out and fill them withÂ Lemon Filling before glazing. Itâ€™s important to use fresh spices. You can also leave out the nutmeg and allspice or try adding a big pinch of cardamom. Be sure to warm the eggs in a bowl of hot water for a few minutes if using them straight from the refrigerator.

Preparation
In large mixing bowl, beat butter and sugar on high speed until light and fluffy. Beat in eggs one at a time until fully absorbed, stopping to scrape down sides of bowl with spatula. Beat in molasses, vanilla, cinnamon, ginger, cloves, nutmeg, allspice and salt.

Scrape into large greased container, cover with plastic wrap and lid, and let rise until doubled, about 1 hour. Gently press dough down, re-cover and chill it overnight or up to several days. (If you prefer, use the dough immediately after rising, but a brief chilling is better.)

Roll out dough on lightly floured surface to 1/4-inch thick; cut into rounds, squares or hearts. For traditional doughnut shape and no filling, use smaller cutter to cut hole in center. Re-roll the scraps one time and cut out more doughnuts. Let stand about 20 minutes, covered.

In deep pot, cast-iron pan, Dutch oven or electric fryer, heat oil to 350 degrees F. Gently add doughnuts to oil without overcrowding pan; cook 1 minute, turn, and cook 1 minute more, until golden, adjusting heat as needed. Remove with spider or slotted spoon to cooling rack set over baking sheet. As soon as cool enough to handle, dip both sides in Lemon Glaze. When fully cooled, if you want to fill them, use chopstick to poke hole in doughnuts, then pipe in Lemon Filling.

Makes about 18 filled doughnuts, or 18 doughnuts and 18 holes.