Photo by Audrey Pavia It’s time to give one of my new roosters, Henryfonda, away. When one of my hens hatched three chicks several months ago, despite the odds, I had fingers crossed they’d all be hens. I ended up with two roosters and only one hen. When I first got chickens, I wanted just […] 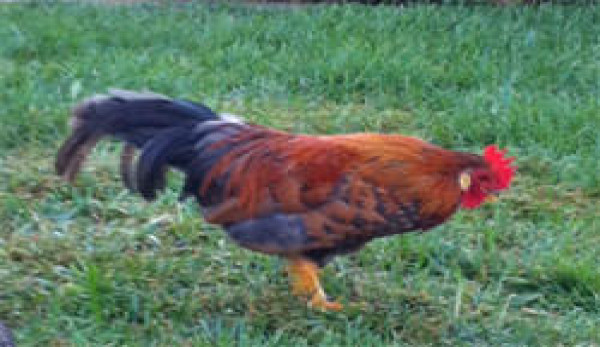 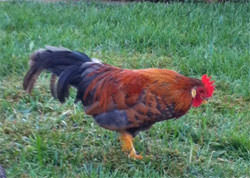 It’s time to give one of my new roosters, Henryfonda, away.

When one of my hens hatched three chicks several months ago, despite the odds, I had fingers crossed they’d all be hens. I ended up with two roosters and only one hen.

When I first got chickens, I wanted just hens; I didn’t want even one rooster. And then, suddenly, I found myself with four of them.

It turns out that I really like roosters and I’m glad that I have Mr. Mabel and Mr. Molly, but the new additions worried me. I knew, come springtime, that one of the young ones would challenge Mr. Mabel for the title of head man, and the fight would be bloody.

So when a friend of mine in town posted a note on Facebook that she was looking for a new bantam rooster to replace one she’d just lost, I was beyond ecstatic. After a few email exchanges, I decided that Henryfonda would be going to a new home. The more dominant of the two young males, he was the clear choice.

As with most big decisions in life, I had mixed feelings about giving this boy away. I’d known him since he was a day old. I’d watched him grow up. Unlike his father, Mr. Mabel, he seemed to be very sweet. Although, when Mr. Mabel was just a cockerel, he was pretty sweet, too.

But Henryfonda was showing signs he might be trouble. Unlike his brother, Liberty, Henry was already starting to crow. He would also instigate sparring games with his siblings — all signs he had a dominant personality. He would be the one most likely to try to take over the flock someday.

On the other hand, his new home would offer him the chance to be the big shot, without having to fight his way to the top. He would be the only rooster in a flock of more than a dozen hens. He would be able to free-range during the day and sleep in a nice, roomy coop at night. On the other hand, a large, red-tailed hawk, who had taken a couple of my friend’s birds over the past year, including her last rooster, frequented his new home. Still, it seemed worth the risk. Henry would have a much better quality of life for as long as he lived.

So the other night, I delivered him to his new home, where he was renamed “Bob.” We put him in the coop where his new girls were sleeping, knowing he’d wake up in the morning to a whole new and better life.