Known as a multipurpose breed, Gloucestershire Old Spots are a large, pink-skinned pig with irregular black spots. Extremely rare in both the United States and United Kingdom, they're considered a critically endangered breed. 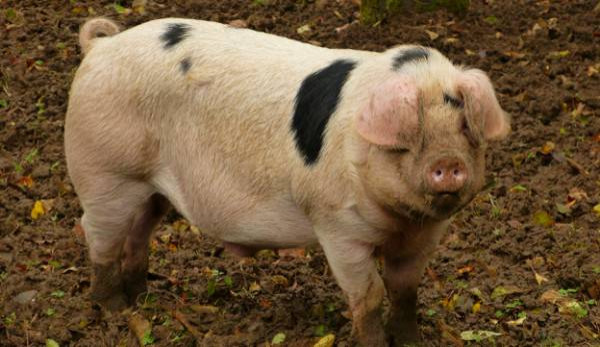 Use: Gloucestershire Old Spots is a multipurpose breed that reaches market weight at about 7 months old and reaches full size (400-600 pounds) by age 2. They produce top-quality meat for chops, roasts, hams and sausages; organic pork production also has renewed interest in the breed. In their homeland of Gloucestershire, England, they’ve been known as orchard pigs, commonly used to clean up fruit orchards, nut tree stands and crop residue.

History: Gloucestershire Old Spots, or GOS, found in their nameplace in England, where they were commonly used to clean up orchards and other crops. They’re considered critically endangered in the United States and the United Kingdom; only 80 Old Spots are estimated to be in the United States. Expect to be placed on a waiting list for available pigs.

Conformation: A large, white pig with irregular black spots, the GOS has large, lopped ears that cover the entire face to the snout. Spots are clearly defined and black, not blue. Legs should be strong and straight, stand erect on their feet, not down on the pasterns (their back toes) and the tail should be high on the rump.

Special Considerations/Notes: As pink-skinned pigs, Old Spots should be provided with shade to prevent sunburns. They’re known as a gentle and sweet-tempered breed, able to be raised in a variety of climates and will thrive outdoors year-round. While first-time mothers tend toward smaller litters, mature sows have litters of six to eight piglets.