GMOs Cause Health Problems in Pigs 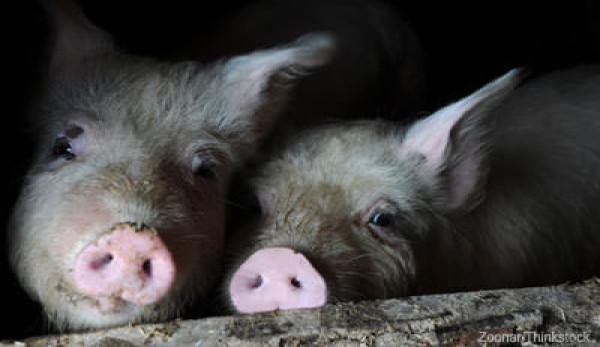 A recently published, cross-continental study of pigs and genetically modified crops shows that pigs were harmed by the consumption of feed containing genetically modified ingredients. According to the study, GM-fed female pigs had on average a 25-percent heavier uterus than non-GM-fed female pigs, a possible indicator of disease that requires further investigation. Also, the level of severe inflammation in stomachs was markedly higher in pigs fed on the GM diet.

The 168 newly-weaned pigs studied were housed in a commercial piggery and fed either a typical diet incorporating GM soy and corn or an equivalent non-GM diet. The pigs were reared under identical housing and feeding conditions and were slaughtered at the typical age of 5 months, after eating the diets for their entire commercial lifespan. Qualified veterinarians, who were not informed which pigs were fed on the GM diet, then autopsied the pigs.

According to lead researcher Dr. Judy Carman, PhD, adjunct professor at Flinders University in Adelaide, Australia, the results of the study are significant for several reasons:

The new study lends scientific credibility to anecdotal evidence from farmers and veterinarians, who have for some years reported reproductive and digestive problems in pigs fed a diet containing GM soy and corn.

“Our results provide clear evidence that regulators need to safety-assess GM crops containing mixtures of GM genes, regardless of whether those genes occur in the one GM plant or in a mixture of GM plants eaten in the same meal, even if regulators have already assessed GM plants containing single GM genes in the mixture,” Carman says.

Iowa-based farmer and crop and livestock advisor Howard Vlieger, one of the study’s coordinators, notes that he’s seen increasing digestive and reproductive problems in his livestock since GM crops entered the food supply.

“In my experience, farmers have found increased production costs and escalating antibiotic use when feeding GM crops,” Vlieger says. “In some operations, the livestock death [toll] is high, and there are unexplained problems including spontaneous abortions, deformities of newborn animals, and an overall listlessness and lack of contentment in the animals.”

“This is not surprising, given the scale of stomach irritation and inflammation now documented. I have seen no financial benefit to farmers who feed GM crops to their animals,” he says.