At what age or weight should I breed my Mini Myotonic goats? I’ve found a lot of info on larger goats but nothing about smaller goats. —Ann Wheeler 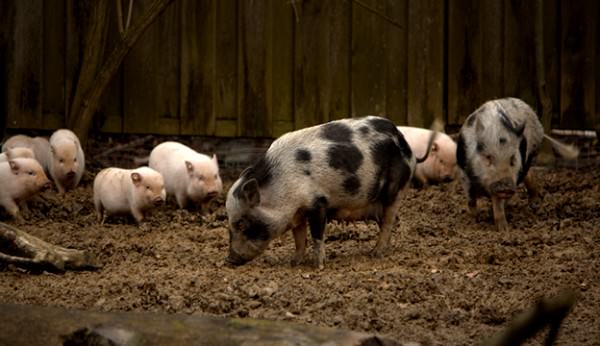 
At what age or weight should I breed my Mini Myotonic goats? I’ve found a lot of info on larger goats but nothing about smaller goats. —Ann Wheeler

Ann, you can use the weight percentages Uzzi and I discovered when I answered a question about breeding young dairy goats. University experts agree that doelings should weigh 60 to 70 percent of their adult weight before breeding.

Mom wrote a book about miniature livestock called Storey’s Guide to Raising Miniature Livestock (Storey Publishing, 2010). As part of her research, she learned a thing or two about miniature farm animals. She was surprised that miniature breeds don’t need a lot of specialized care. What works for bigger animals usually works for minis, too.

There are a lot of good reasons to keep miniature livestock. Miniature farm animals need less housing space, pasture and feed than full-sized livestock. They’re easier to handle and less intimidating than bigger animals, especially for beginners, children, old folks and the physically challenged, not just because they’re smaller but because many miniatures are bred for calm dispositions and tractability. Chores like hoof trimming, shearing or clipping, giving shots, and administering dewormers are easier, too.

There are three kinds of miniature livestock:

If you want to raise miniature livestock, there are plenty of species and breeds to choose from. Take miniature goats. We have four kinds on our farm! Modo and Spike, the homeless goats who joined us last year, are a Mini Myotonic and a mixed breed miniature goat. Sweetie is a Pygmy goat. Iggy, Ozzy, Gizmo and Gonzo are Nigerian Dwarf goats. Other cool small goats include several scaled-down dairy breeds registered by the Miniature Dairy Goat Association: Mini Alpines, Mini LaManchas, Mini Nubians, Mini Oberhaslis, Mini Saanens and Mini-Toggenburgs.

Our sheep are miniatures, too. They’re Miniature Cheviots. Some other miniature sheep you could raise (though Uzzi and I don’t think they’re quite as cute as ours) are Shetlands, Babydoll Southdowns, and really teensy Soay and Ouessant sheep.

Did you know there are even miniature llamas? There are! They look like full-sized llamas, but they’re smaller. They’re registered by the American Miniature Llama Association.

When most people think of miniature pigs they think of Vietnamese Potbelly pigs or KuneKunes, but two kinds of heritage hogs are sometimes small enough to be considered miniatures: Guinea hogs and Ossabaw Island hogs.

There are loads of miniature cattle breeds to choose from. Lowline Angus are scaled-down versions of full-sized Angus cattle, while Miniature Herefords are just small regular Herefords. Zebus look a lot like full-sized Brahman cattle but they’re a separate, ancient breed. The Dexter is a naturally tiny dual-purpose meat and dairy breed from Ireland. Miniature Jerseys give a lot of milk, too. Both Florida Cracker cattle and Pineywoods cattle produce unusually small individuals called guinea cattle. Finally, breeders are working hard to miniaturize Highland
and Texas Longhorn cattle.

And if you like small equines try Miniature donkeys, Miniature mules or Miniature horses. British Shetlands and Caspian horses are mini equines, too.

So the next time you add new animals to your farm, think small! There are scores of miniature livestock breeds for you to choose from.

One reply on “Go Small With Miniature Livestock”