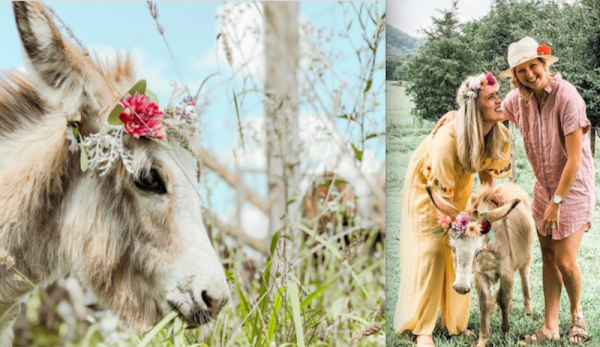 “I’ve always had a love for animals and being outside and the hard work and reward that comes from farming,” says Caitlyn Blom, a co-founder of Honey Blom Farms in Knoxville, Tennessee, that she runs alongside her wife, Ciara Blom.

Since launching the farm in the spring of 2018, the venture has gained a reputation for its resident miniature-donkeys and miniature-Nubian dwarf goatsâ€”both of which have become eye-catching stars of the venture’s social media accounts.

We spoke to Blom about the roots of Honey Blom Farms and why miniature-donkeys make for such great livestock guardians. We also got the scoop on a little something called goat glamping.

Blom says that her interest in farming goes back around a decade or so ago, when her family had “a small farm that was really driven by my love for animals and gardening.”

After the family farm venture was sold, Blom says that she knew she “always wanted to have a farm again one dayâ€”but I didn’t think it would be this quickly!”

The Role of Miniature Donkeys

Miniature donkeys play a key role at Honey Blom Farms, primarily by acting as livestock guardians on the premises.

“When our family had a farm we had a donkey who was a guard for our cows,” recalls Blom. “Donkeys are just terrific guard animals and such unique equine in themselves. So two of our mini donkeys were the first animals on the farm because I knew I wanted them as guardian animals for our goats and chickens.”

Since the days of those initial two miniature donkeys, Honey Blom Farms has now started its own breeding program.

If you check out the Honey Blom Farms Instagram account, you’ll notice a few mentions of the hashtag GoatGlamping. The concept will involve guests staying at the farm in a plush renovated 1968 camper van and getting to frolic with the resident goats.

Blom says that they plan to launch goat glamping in early 2021.

Get to Know Clara

Clara is one of the star goats at Honey Blom Farms. “She has no fear and is certainly the most outgoing goat,” says Blom. “She’s the first to greet the people that come to visit.”

She adds that Clara was bottle fed “so I think that led to her being extra attention needing” and that “if she could live in the house, I think she would!”

The Joy of Farming

“Farming’s a lot of hard work and there’s so much grit and poop and tears and stress that goes into it,” says Blom when asked about the most rewarding part of the farming lifestyle. “But at the end of the day, being able to create your own food source and caring for your animals and the sense of joy that comes around that is the best feeling.”