How To Construct A Simple Stanchion For Your Goats

Follow these directions to build a goat stanchion, a DIY livestock structure that allows you to easily groom, medicate and milk your dairy goats. 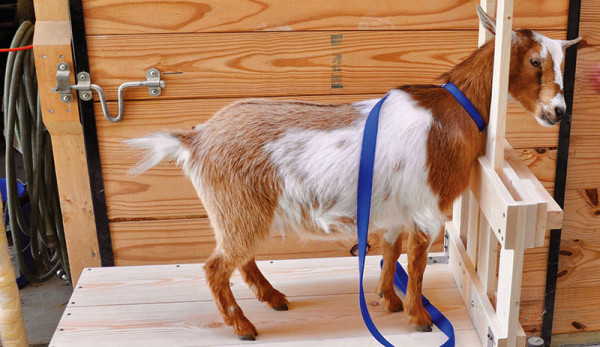 A goat stanchion is an important piece of equipment for dairy goat owners, particularly when the goats are being milked. A stanchion restrains the goats, making hoof trimming, clipping and medicating them easier, but it’s almost essential when milking time rolls around: When a doe is on a stand, her udder is easily accessible.

Steel or aluminum stanchions are readily available from commercial suppliers, but they can be expensive. Alternatively, you can make your own durable, sturdy milking stand from lumber for less. It takes just a few tools and about a day of effort. The goat stanchion featured here was designed for standard-size goats, but I also use it for my smaller Nigerian Dwarf goats.

When purchasing lumber for building this goat-milking stanchion, nonpressure-treated lumber is recommended to avoid possible milk contamination from chemicals used to pressure-treat lumber.

When assembling the various portions of the goat stanchion, it’s important to tack the pieces together first (using the 1-inch finishing nails) to make sure the assembly is correct and square. After verifying everything is assembled correctly, use the 1⁄8-inch drill bit to predrill holes for the screws near the spots used to tack the lumber together. Then use the 2-inch exterior deck screws to screw everything together and finalize construction of each section.

Cut lumber to the sizes described below. Note: The legs of the goat stanchion can be made a different length depending on your breed. I built this stand for Nigerian Dwarf goats and wanted the legs to be long so my small goats would be higher. I later shortened the legs to 12 inches instead of 21 inches because my goats had trouble getting on the stand when they were pregnant. Lesson learned: Starting with a shorter leg length (12 inches for dwarf or 14 inches for standard breeds) is more reasonable, or you could also shorten the legs later. 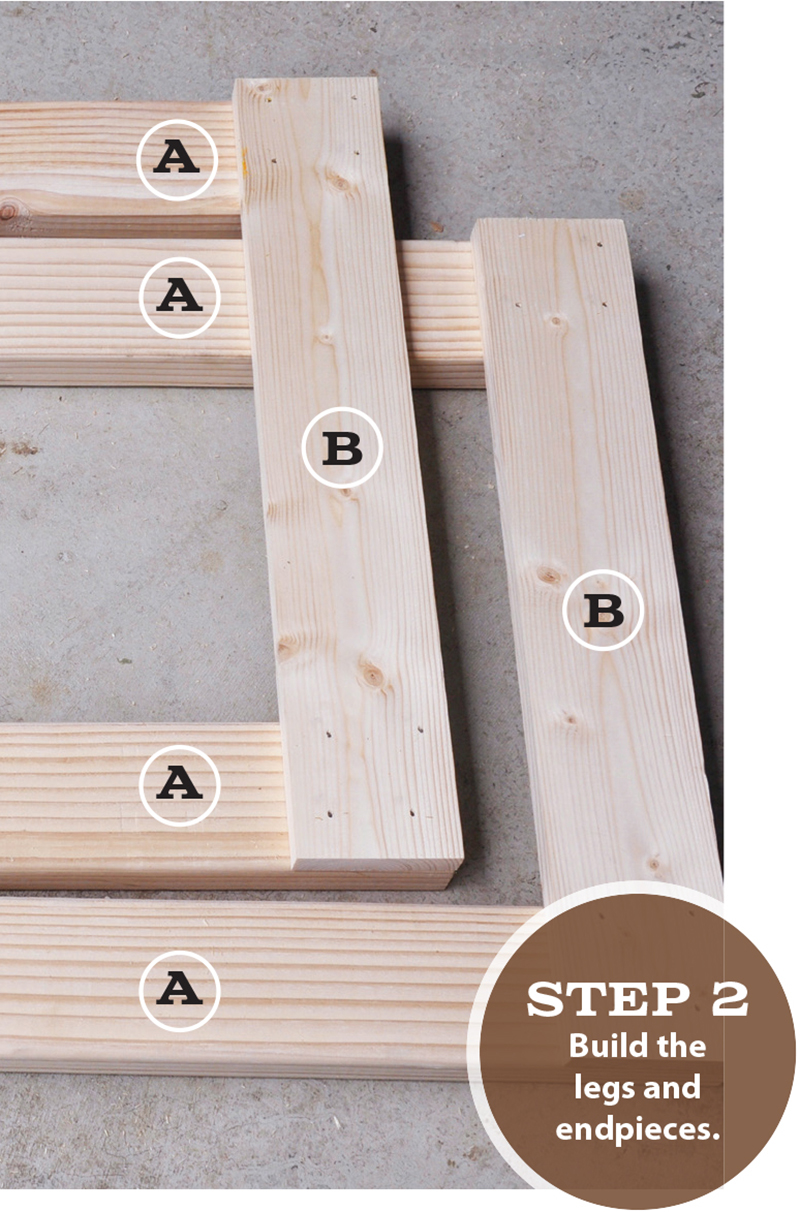 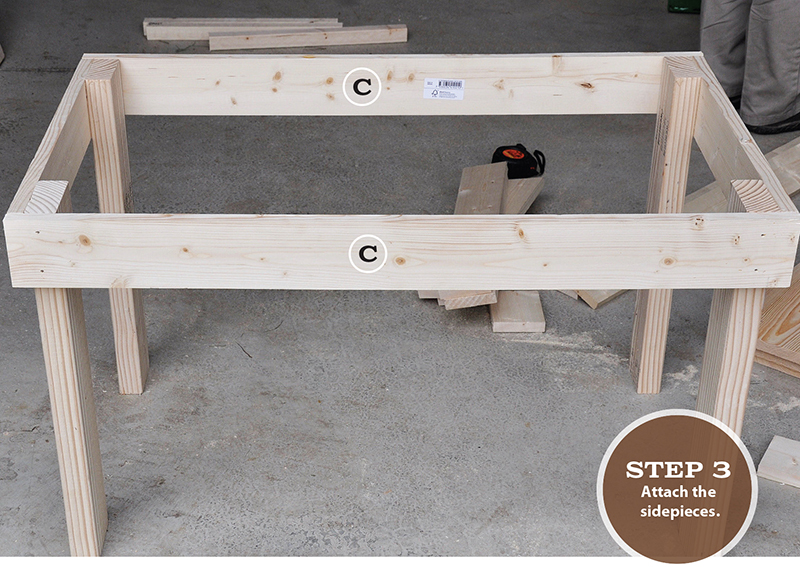 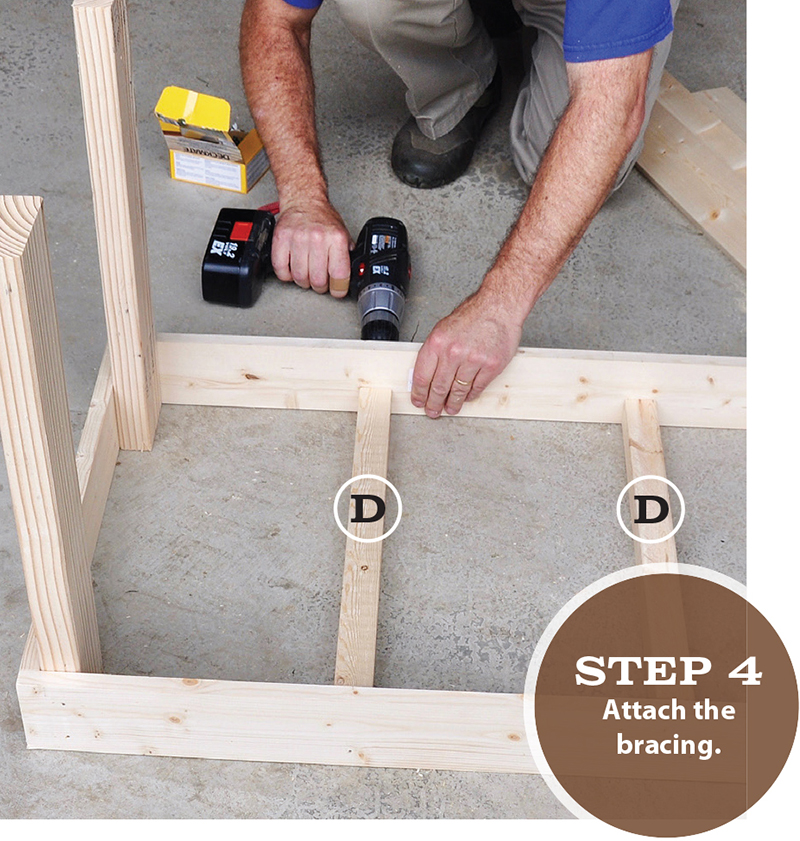 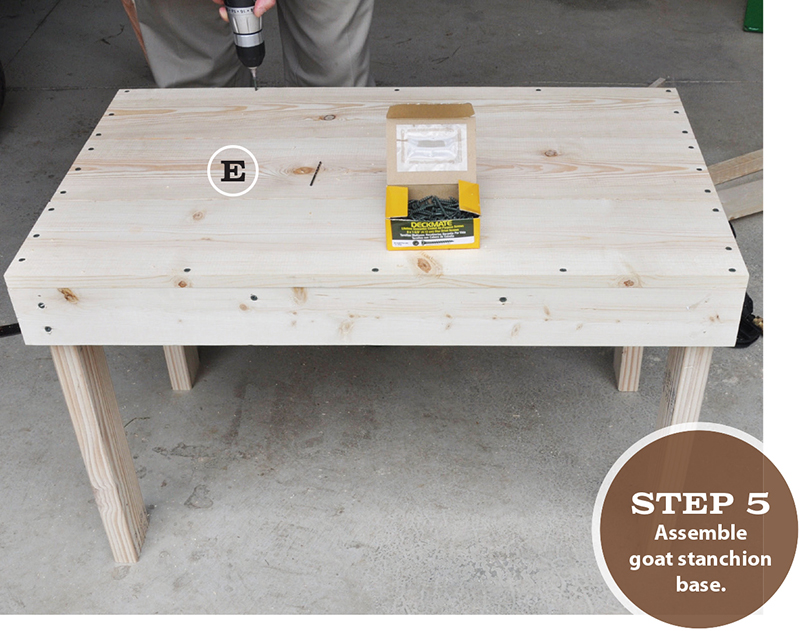 Tack three E deckings to the top of the assembly as shown in the Step 5 photo. Make sure the assembly is square, then predrill holes using the 1⁄8-inch drill bit near all tacking locations. Use the 2-inch deck screws to screw the assembly together.

Take the head gate guide labeled F1 and measure at the top from one corner over and mark at 3 inches. Then measure down the side from the same corner to 5½ inches and mark again. Draw a line from the first mark to the second and cut this angle with your saw. 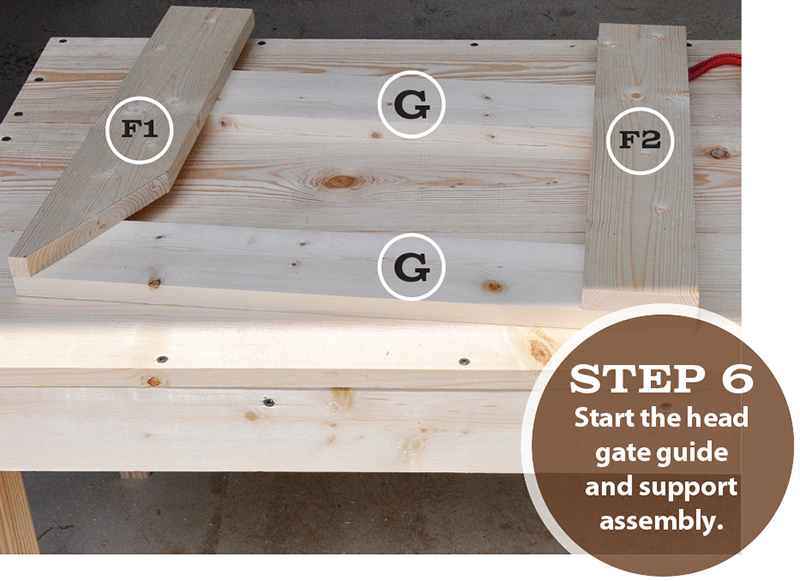 Take both head gate guide pieces and position two head gate supports across, with the top G piece even and bottom G piece 4 inches from the ends of F1 and F2 as shown in Step 6. Tack in place with finish nails.

Turn the assembly over, and tack the remaining two G pieces in the same location as the first two so that the F1 and F2 pieces are between the G pieces as shown in Step 7. Predrill holes and use the 2-inch deck screws to screw the assembly together from both sides. Avoid hitting screws coming from the first side when screwing together the second side. 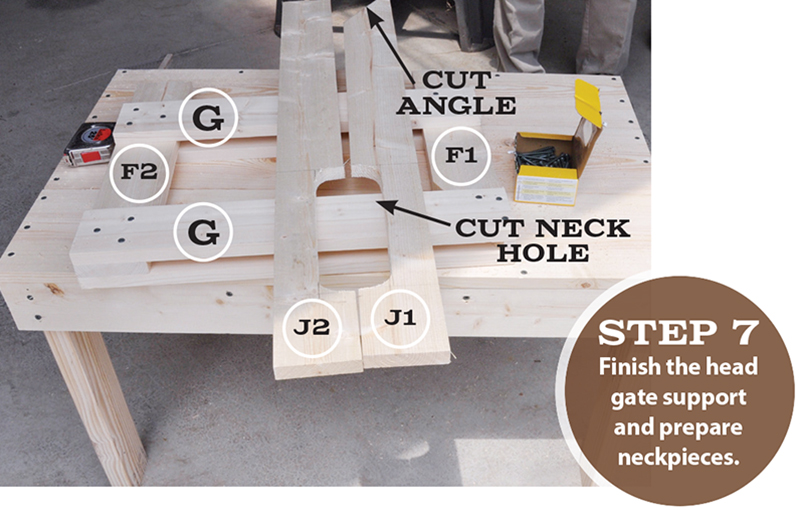 Create the neck hole in J1 and J2 neckpieces by using the jigsaw to cut starting 4 inches down from the top and ending 17 inches from the top. Cut each to a depth of 1½ inches, and curve the cut at the top and bottom as shown in the Step 7 photo.

Sand all corners and surfaces of the neckpieces, particularly J1, as this is the movable portion of the head gate and will need to move freely. 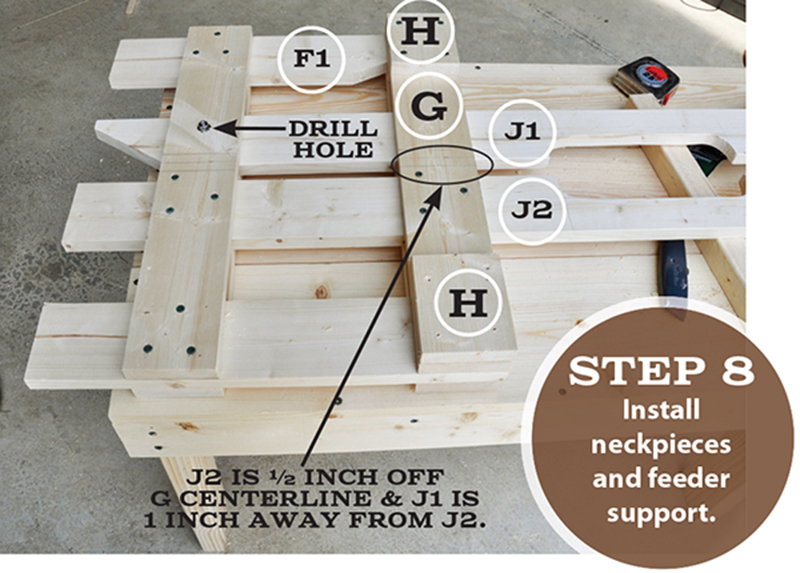 Use the 11⁄32-inch drill bit to drill a hole through the lower G pieces and J1. Switch to the 13⁄16-inch bit, and countersink the hole on each side to a depth of 1⁄4 inches to allow the slotted round bolt and hex nut to recess within the assembly. Place one 1⁄4-inch washer on the round bolt, insert through the drilled hole, place another washer on the bolt, add the hex nut and tighten.

Place H feeder supports on the upper G piece aligned with the end of G, and tack in place. Make sure the assembly is correct, and square and then drill starter holes (using the 1⁄8-inch bit) near the locations where the assembly is tacked together. Screw the assembly together with the 2-inch deck screws. 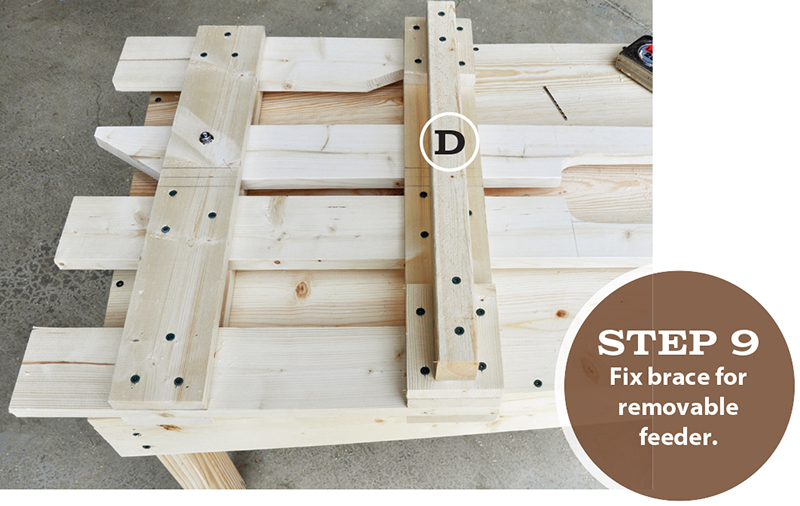 Place the remaining D bracing centered over H as shown in Step 9. Predrill holes and screw in place with the 3-inch deck screws. Adding the bracing this way allows a removable feeder to be placed in the head gate. Inexpensive removable plastic feeders can be purchased at ­animal-supply stores and used to feed the goats grain while they are being milked. 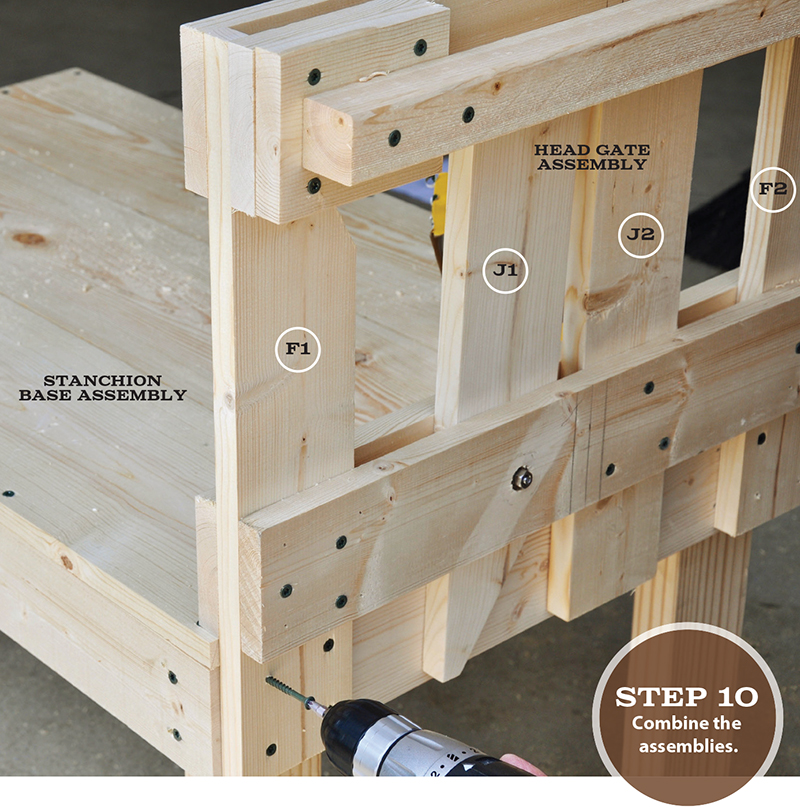 Attach the two corner brackets and the hook-and-eye as shown in step 11. Extra eyes can be added so that the tops of the J1 and J2 do not touch when the hook and eye are closed, if goats with thicker necks will be using the stand. 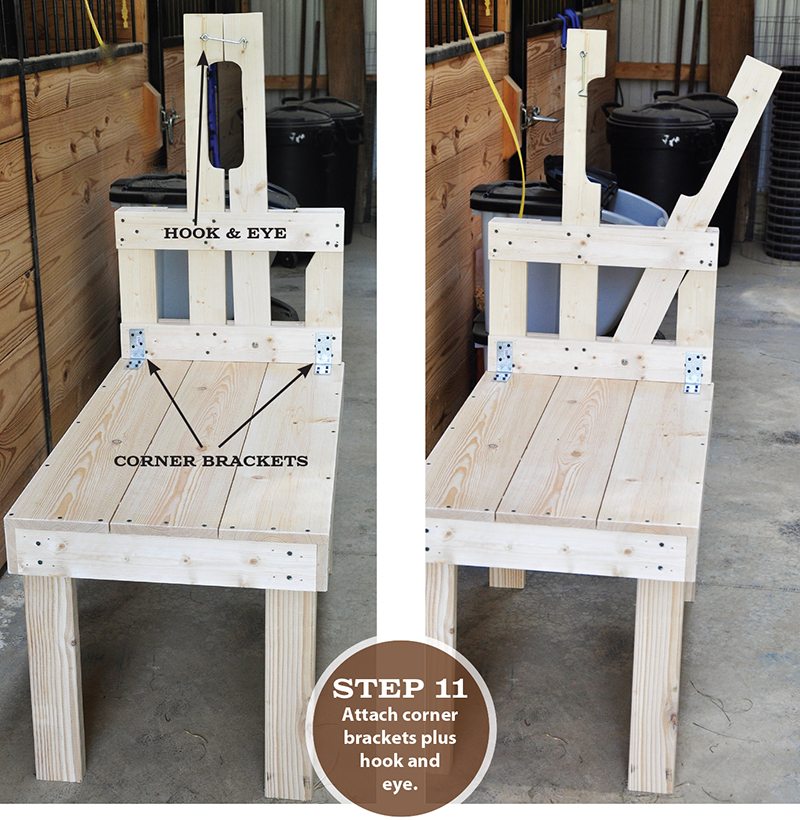 Now that you have a completed goat stanchion, you just need to add an animal! If you are looking for a strong, long-lasting goat-milking stanchion, this design provides just that. The stanchion shown in this article was built in 2010, and it’s still going strong today! 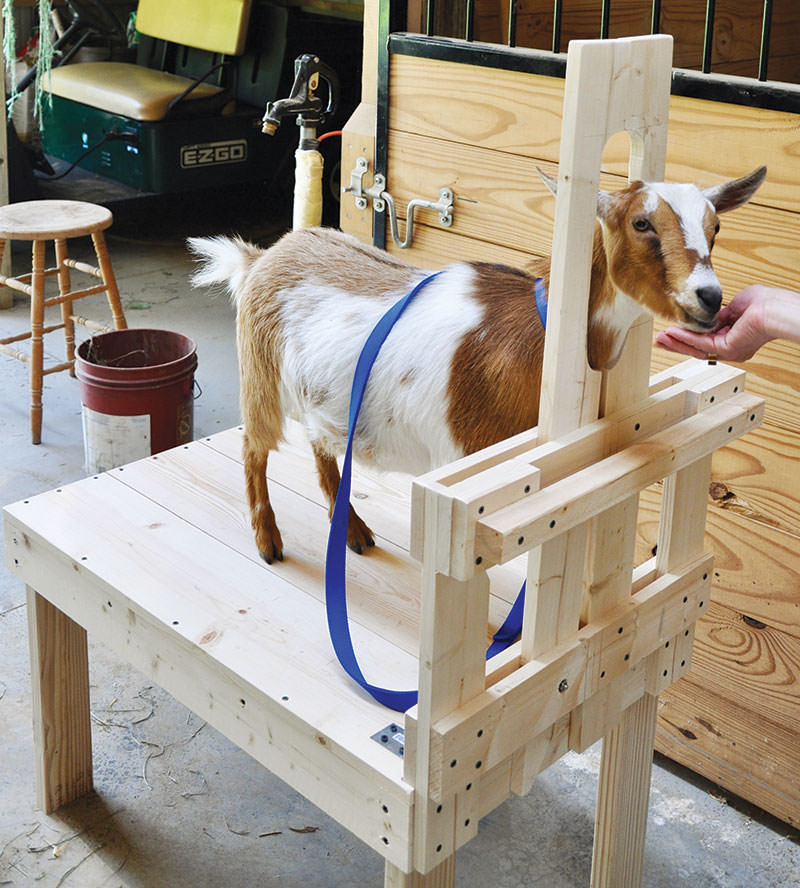