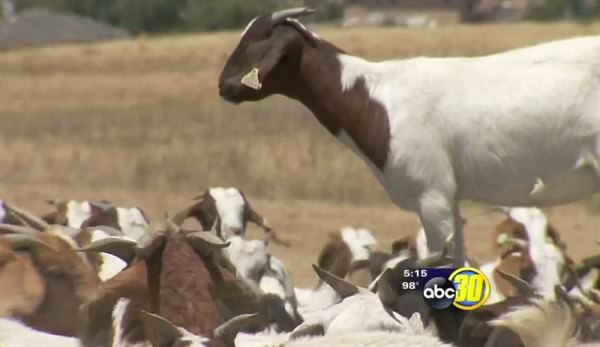 It’s wildfire season in California, and large-scale fires are ravaging the state, eating up more than 50,000 acres and requiring the services of approximately 3,000 firefighters, according to theÂ L.A. Times.Â However, there’s an unlikely group of members adding to the fire-fighting crew: goats.

In the Central Valley, goats have been recruited to step in and mow down brush that’s fueling the fires, Joe Ybarra at ABC30 reports. Dead vegetation is wildfire candy, and the number of dead trees has skyrocketed since 2010 thanks to investations of bark beetles prolonged drought on the West coast.

Mowing down dry brush can take a lot of manpower, but it’s something goats excel at. In fact, goat services across the country offer up herds of goats for anything from mowing grass to eradicating invasive plant species. But the herd based in Los Banos, Calif., has a moreÂ dire task to attend to.

The goats are managed byÂ AndrĂ©e Soares ofÂ Star Creek Land StewardsÂ and are a Spanish x Boer cross. She has five herds doing work in four counties, according to ABC30, and each herd can mow down 1 to 2 acres of brush per day. In addition to getting rid of potential fire starters, the goats’ hooves leave indentations in the soil, making perfect places for puddling water.

Learn more about these heroic goats by watching the video report on ABC30.