Choose the Right Goats to Raise for Meat

At first, it seems like there's a great deal to learn about goats, but once you've mastered the basics, they're relatively easy animals to keep. 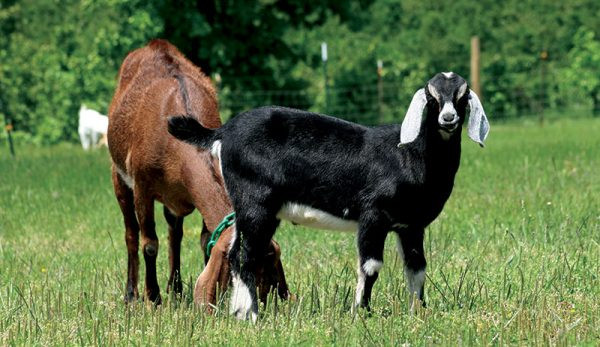 Have you ever tried goat meat? If not, you should. The U.S. Department of Agriculture reports that meat from goats is lower in fat and cholesterol than beef, chicken and pork, and that it has about the same amount of protein.

A typical kid, 12 to 20 weeks old, yields 12 to 25 pounds of tasty meat, while a 100-pound goat, 12 to 18 months old, yields 40 to 50 pounds. Chevon from older goats can be gamy, so unless you prefer stronger-tasting meat for Caribbean dishes and curries, itŌĆÖs best to slaughter goats while theyŌĆÖre young.

Do some research before buying goats to raise for meat. Goats are a social species; you should keep more than one. A solitary goat is unhappy and wonŌĆÖt eat or gain well, so itŌĆÖs best to have at least two goats.

Goats also require adequate shelter, good fences, quality food, regular deworming, hoof trimming and certain vaccinations depending on where you live. ThereŌĆÖs a lot to learn with goats, but once youŌĆÖve mastered it, theyŌĆÖre relatively easy to keep.

If you prefer cabrito and also like goat milk, or if you want nourishing milk to fatten pigs or chickens, consider adding a few dairy goats to your farm. Doelings (female kids) from milking lines generally fetch a decent price, while bucklings (male kids) can go in the freezer.

Note that most dairy kids arenŌĆÖt as fleshy as meat breed kids, but they still produce tasty meat. Some breeds such as Kinders are good milkers as well as meat producers.

Another way to raise cabrito: Purchase newborn dairy-breed bucklings and raise them on cowŌĆÖs milk or milk replacer. To meet their growth potential, bottle kids need a lot of nourishment up front, and quality milk replacers are expensive. Choose one based on milk products, not soy, and strictly avoid one-kind-feeds-all-species milk replacers. Excess bucklings are a byproduct of the dairy industry, and breeders often have no use for them either, so the newborns themselves are quite cheap.

ItŌĆÖs best to buy directly from the dairy or a breeder rather than an auction barn. Newborn kids are delicate and succumb easily to stress and disease, which are more prevalent in sale-barn buying. Ask whether the kids have nursed their dams or been fed colostrum; buy only those that have. KidsŌĆÖ immune systems donŌĆÖt develop until theyŌĆÖre roughly 7 weeks old, so itŌĆÖs vital they imbibe antibody-rich colostrum 12 to 24 hours after birth.

You can also start with bottle kids if you plan to raise young goats to process as chevon. In this case, meat-breed kids are a better choice because they build more finished muscle than dairy kids. Meat breeds include Boers, Kikos, larger Myotonics (fainters), Savannas and Spanish goats as well as crosses between these breeds. Breeders and meat producers often sell orphans and excess kids from multiple births as bottle kids, but make contact before kidding season begins because these goats tend to sell fast.

Tiny kids can be fragile, so weaned kids that are 12 to 18 weeks old can be a better bet. Buy from a producer, and ask to see vaccination and deworming records before purchasing your goats. Visit the farm, and ask to see the main herd, not just the kids youŌĆÖre considering.

A few goats in every group might be thinner than the norm, but it could signal a problem if many goats are downright skinny. Look for coughing, mattered eyes, nasal discharges and abscesses on throats, necks or loins. Healthy goats are alert with tails held out or flipped up across their backs; sick goats look dejected with tails hanging down.

DonŌĆÖt bring sickness to your farm. Be especially wary of abscesses. An incurable and very contagious disease called caseous lymphadenitis often causes them.

Sometimes dairies and producers cull animals for one reason or another, and if you prefer older, gamier chevon, culls can work for you. These you can buy at a sale barn if you take them directly to a processor without bringing them home. OtherwiseŌĆöagain, to be safeŌĆöbuy direct from the farm.

Goats are browsers, meaning they prefer brush, leaves and weeds instead of grass, so your meat goats can grow and thrive on pasture that your cows, sheep or horses leave behind. They do, however, need concentrates to mature fairly quickly to slaughtering size. Consider bagged meat-goat grower feed containing 15 or 16 percent protein, or feed a lower protein grain mix and provide protein blocks labeled for goats to fill in the needed protein.

Goat feed and protein blocks come in medicated and nonmedicated versions. The medication used in these products is Rumensin, a brand name for monensin, which is extremely toxic to horses and donkeys, so keep medicated goat products away from these species.

Goats also require balanced minerals provided in loose mineral feeders or as blocks. The ratio of calcium to phosphorus is very important. It needs to be two parts calcium to one part phosphorus, so check labels when choosing goat mineral. If in doubt, consult your county extension agent, who can advise you how to feed your goats for maximum gain.

Know that some slaughterhouses donŌĆÖt process goats. Before deciding to raise goats, find one that does, seek an experienced slaughterer willing to do it, or resign yourself to processing them yourself. If you live near a Muslim community, there are probably halal slaughter men who will come to your farm. Ask around.