God Save the Queen Bee

Beekeepers are suing the government, scientists are speaking out, and we're all in serious trouble in the name of bees. 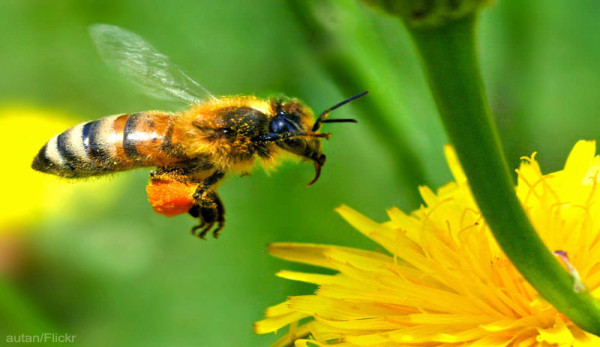 From childhood, we’re taught to dislike bees. No matter what any adult might tell us about the yellow-and-black fellows not wanting to hurt us, one sting, and the bees are on every child’s shit list. It takes a while to get over the stingâ€”literallyâ€”of our first bee encounter and to come around to the realization that they don’t actually want to hurt us. Even many adults now don’t realize we need bees for our survival.

Aside from the occasional stingâ€”and I get it that some people are dangerously allergic to bee stingsâ€”bees don’t do wrong. A few of bees’ redeeming qualities:

And thatâ€™s just the tip of the iceburg, so when you hear talk of the “disappearing bees,â€ť itâ€™s not just senseless talk. Falling bee populations can impact our day-to-day lives in major ways.

DisappearingÂ  Act
Bees started disappearing 2005 as a result of what is now called colony collapse disorder. While, still, no exact cause has been pinpointed, there’s good reason to believeÂ pesticides have something to do with it. And no kidding, because pesticides are designed to kill insects, and bees are insects, then â€¦ is the connection obvious? Pesticide manufacturers don’t want us to believe it, whether or not they believe it themselves.

Now that one-third of America’s Honey bee colonies have died, scientists are sounding the alarms. TheÂ Task Force on Systemic Pesticides, a group of independent scientists from around the world, looked at 800 peer-reviewed reports of the interaction between pesticides and pollinators and says, “There is clear evidence of harm sufficient to trigger regulatory action.â€ť Does this wording frighten anyone else?

Ag’s Nicotine Addiction
The particular pesticides in the spotlight are neonicotinoids, derived from nicotine (even bad for bugs!), which were first introduced in 1994 and approved for use on corn in the U.S. in 1999, in canola in 2003 and on a wide range of crops in 2013. It’s used to coat crop seeds and to spray directly on plants. Neonicotinoids, like imidacloprid and clothianidin, are common, even sold at garden centers and home-improvement stores under the names Adonis 75 WSP termite control, Temprid SC insecticide, Merit 75 WP insecticide and Criterion 75 WP systemic insecticide. They are the most widely used class of insecticides in the world, with about 40 percent market share.

These chemicals mess with insects’ ability to groom themselves, weaken insects’ immune systems, make insects more susceptible to pests and blocks their ability to navigate home. When affected bees do manage to find their way home, they carry with them contaminated pollen, which then contaminates the other hive dwellers. (If you haven’t done so already, check out the inner workings of a hive.) It’s not just pollinators, either: Neonicotinoids affect earthworms and birds, too.

Should the Government Intervene?
The TFSP is not the only group concerned about neonicotinoids. The nonprofit environmental law firmÂ Earthjustice is representing beekeeping groups inÂ an appeal against the U.S. Environmental Protection Agency. The lawsuit alleges the EPA used bad science to approve the neonic sulfoxaflor and wants changes to the sulfoxaflor label and the EPA’s risk-assessment process.

Pollinator die-off finally has the attention of the President Obama, too. Last week, he released the memorandum, “Creating a Federal Strategy to Promote the Health of Honey Bees and Other Pollinators,â€ť outlining government support of pollinator-protection efforts. This includes establishing a multi-department Pollinator Health Task Force spearheaded by the Secretary of Agriculture and EPA administrator.

Within 180 days, the task force needs to develop a National Pollinator Health Strategy that includes a Pollinator Research Action Plan and a public-education plan. It’s also supposed to improve pollinator habitat at government-managed lands and facilities, along utility lines, in reclamation and restoration projects, and more; and the EPA is being directed to review pesticide research and policies. But if the head of the EPA is also the head of this task force, who’s going to police this show?

The U.S. isâ€”not surprisinglyâ€”behind the curve on pollinator protection, as the European Union already significantly limited the use of neonicotinoids in 2013, admitting the connection between the chemical and declining pollinator health.

Do your part to help save the bees with help from HobbyFarms.com: