The Wonderful Weed Of Goldenrod & Why You Should Keep It Around

Goldenrod is the last source of nectar each year. What some gardeners consider a weed can give bees an important final boost for winter. 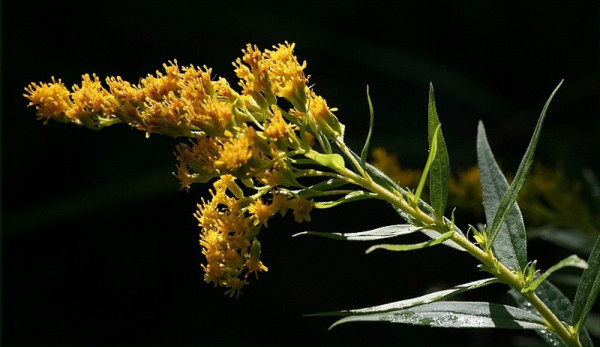 Ask conventional gardeners, and they might hem and haw about the presence of goldenrod, a so-called “weed” to some. Ask a beekeeper, and you’ll quickly learn that goldenrod is one of those do-or-die kind of weeds. In many parts of the United States, Goldenrod is the very last nectar producing flower available for bees, wasps and other insects before the onset of winter. It’s in the Asteraceae family, one that also includes sunflowers, artichokes, daisies and dandelions, and there are more than 100 species of it in North America. Goldenrod might be popular and easily identifiable in name, but it’s a challenging plant to visually pin down because it varies dramatically in appearance. What is absolutely certain is that the bees love it and need it.

Goldenrod is critical to the late fall hives for several reasons. If the end of the summer has been relatively wet, that will stimulate nectar production in the goldenrod bloom, which is a wonderful thing. Plentiful nectar (and a boost of it) in the early fall will trigger the queen to increase her laying just a smidge, increasing the colony’s numbers a bit, and helping it get just a bit closer to surviving the winter. The nectar and the pollen will be stored and capped, adding to the colony’s winter stores, giving it another little leg up (and hopefully replacing some of the honey that was taken during the summer, if the beekeeper was overzealous with the harvest).

Goldenrod’s bloom time is four to six weeks, during a good year. It’s a fantastic source of nutrition for the bees, but it doesn’t make a fabulous honey. Some people enjoy it, but most find it dark and rather bitter. It doesn’t have the sweet smell that most honey doesâ€”and that’s probably a good thing, because no responsible beekeeper will be harvesting any honey that late in the year. Just be sure to commit the smell to memory, as some beekeepers are alarmed by the slightly tangy, licorice-type smell when they check their winter hives and mistake it for disease. If you can distinguish the smell of goldenrod honey, you can more accurately gauge your bees’ winter health.

Anyone would agree that honeybee health and climate change are two of our most contentious topics in the popular and political dialogue. We’re learning with recent studies that, in some cases, these two occurrences are inextricably linked. Lewis H. Ziska, a plant physiologist with Agricultural Research Service, has studied this very topic since the late 1980s. Ziska has recently learned that rising levels of carbon dioxide have affected the protein produced by plant species that are main food sources for bees and other beneficial insects. Much work is still needed in helping plant species and the insects that depend on them adapt to the rapidly rising CO2 levels because it is moving faster than natural evolution can keep up. In the meantime, you can do your part by planting goldenrodâ€”and other native, flowering plantsâ€”and keeping a chemical-free, pesticide-free lawn, garden or green space.