Though it's perfectly valid to keep only hens, roosters that meet a few important criteria can be invaluable additions to the chicken yard. 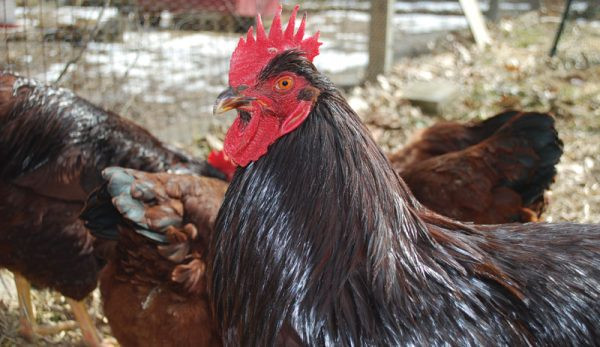 Not Always a Blessed Event

Of course, owning a roo is not always a good thing. Elaine and I certainly learned so when we first started raising chooks. These happened to be industrial Rhode Island Reds purchased at a local farm-supply store.

Hybrid Reds, as is typically true with industrial birds, have had the broodiness trait bred out of them. And, at least from our experience, one of the results has been hyper-aggressive roosters.Ā

Even though our industrial Red hens werenāt likely to ever raise chicks, we still wanted the experience of having a rooster as flock leader. Thus, we methodically culled five of the six cockerels we received in a straight-run purchase. This left only Little Jerry, who we deemed as the bravest and brightest of the sextet.

Read more: Should you get a rooster? Maybe. Here are the pros and cons.

Jerry acted acceptably until he was about 18 months old. Then he became a terror, attacking Elaine whenever she turned her back on him and rushing me whenever I entered the run. My wife became so afraid of Jerry that she hesitated to even gather eggs.

Then the inevitable happened. Jerry lost his fear of me, biting me on the hand and trying to spur me at the same time. The next day, Little Jerry became Sunday dinner and served as workday lunches for three more days.

Every year, I receive emails from folks wanting tips on how to rehabilitate aggressive industrial roosters. These are males that have bitten, spurred and chased their owners and children. And, just as bad, these roos have endlessly tormented their hens.Ā

Iāve tried all kinds of rehab tactics: holding roosters and gently bending their heads downward to show who is dominant, stomping my foot at them, staring them down, not showing fear, and on and on. None of these tactics have worked with multiple roosters.

And practically nothing does work except culling them from the flock.

Of course, even heritage roosters can act thuggishly. For example, after we gave up on industrial birds, we decided to try raising purebred Rhode Island Reds and Buff Orpingtons.Ā

Our first Buff flock leader was a ruffian named Oscar. He terrorized us and his hens, even attempting to mate with them when the ladies were trying to lay an egg. He literally tried to pull them out of the nesting box by their necks.

He was quickly removed from the flock.Ā

Why a Rooster Can Be Right

After the Oscar debacle, we decided to just go with raising heritage Reds. Weāve had some wonderful roos, with the aforementioned Don (named for Don Draper, the debonair Madison Avenue character in the television show Mad Men) the best of them all. He checks off all the superlatives of why chicken enthusiasts should desire to have a rooster as protector of home and henhouse.

First, Don serves as a fabulous guardian. If anyone walks or drives down our driveway, Don will explode with paroxysms of crowing, letting the interloper know who is master of this domain. If that villain should perchance dare to approach our two runs, Don will stalk toward the fence, give the scoundrel the evil eye and erupt into more crowing.

Second, the ideal roo would give his life for his hens. Without fail every winter, some species of hawk will pay a visit to our runs. During such events, Iāve witnessed cowardly roosters run into their coop with the hens, cowering in the inner recesses.

Not Don, though. He always holds down the proverbial fort against these aerial invaders. Don endlessly emits the alarm call until I come charging out of the house to see what the threat is.Ā

Third, a flock rooster should always be on duty. Like many flock fans, we like to let our birds roam around the yard several times a week. Although Elaine and I always supervise these outings, Don is on the job outside the run, too.

For example, we have two side-by-side runs, each with six to eight heritage Rhode Island Red hens. Each flock has its own flock rooster, too: Don and some other younger roo or cockerel.

Read more: Why does a rooster crow? There are a few reasons, actually!

A Tale of Two Flocks

On one of those foraging expeditions, I was working inside while Elaine was outside with the two flocks. After a while, Elaine called for me to come help her. āDon wonāt stay with his flock,ā she said in an exasperated tone. āHe keeps running nonstop back and forth between the two flocks.āĀ

I came outside to try to ascertain why this was happening. Don was scurrying hither and yon from the front yardāwhere his flock foragedāto the backyard where the other assemblage congregated. It was then that I realized what I think was going on inside of Donās chicken head.

āHe feels that all the hens in both flocks are his,ā I told Elaine. āHe canāt figure out which flock needs him the most. And he definitely doesnāt recognize Friday [a cockerel at the time] as a proper flock leader. Iām afraid heās going to keep running back and forth until all of them go back inside for the day.ā

And Don did, until the flocks returned to their respective coops. It was just one more sublime reason why our boy is the ideal rooster.

Another crucial trait of a dominant male is to be gentle toward his owners and his hens. Don has never shown any aggressiveness toward us and allows us to pick him up for examinations. We can carry him back to the henhouse if he is dallying when itās time to lead the hens homeward.

Similarly, Don has never attacked his hens if they refuse his mating overtures.Ā

But all that mating has resulted in generations of chicks, too. And if you are tired of owning industrial birds that canāt ever produce offspring, or become exhausted from having to deal with raising chicks, monitoring a heat lamp, and basically being the mama hen yourself, consider a heritage rooster and his harem of hens.

The rooster will take care of things on his end, for sure.

Changing of the Guard

A sports maxim exists that states: āFather Time is undefeated.ā Thus is the case with all virile roosters, and, sadly, Don as well. Last spring, at the age of 5, Don performed his reproductive duties. But of the 22 eggs his hens brooded, only two hatched.Ā

Eventually, Elaine and I realized that the problem was that Don was no longer as viable as he once was. We had to remove Don from his flock and put Friday, a very virile 18-month-old stud, with the hens.

The proverbial baton had been passed, and Friday is now the alpha male in our backyard. However, Don will continue to live out his life in comfort.

Friday, so named because he hatched on that day of the week, shares the same aforementioned positive traits as Don. This is why we kept him over other cockerels.

Don Jr. fell out of favor because, well, he acted cowardly. Fleeing from a hawk perched on a coop support is one thing. But being scared of a butterfly that blundered into the run is not a rĆ©sumĆ© builder.

Giving the alarm call at a winged creature that weighs maybe an ounce is unacceptable.

Another young roo, Bobby, looked to have potential. But he allowed himself to be bullied by cockerels the same size or smaller than he was.

Then there was the young roo that we culled before he even earned a name. He suffered from some kind of respiratory problem that caused him to frequently wheeze. You donāt want that trait passed down to the next generation.Ā

People give all kinds of reasons for not having a rooster. They crow too much during the day. They wake everybody up too early in the morning. Theyāre so big and they eat so much, and on and on.

I counter that I love the sounds of crowing in the morning. It says all is well in rural America and the day to come will be grand.

And, yes, roosters eat a great deal more than any hen does. But they repay us and their hens with protection and progeny. Give roosters a try, and find out for yourself how much they can add to your flock and your backyard.Ā

Possessing a rooster will add a touch of panache, glamour, class, whatever you want to call it, to your flock.

Letās face it. We all love our hens. And they do have unique personality traits. Some even have some physical traits where we can identify them individually. But for sheer personality and aplomb, nothing beats a rooster.Ā

Weighing in at close to 9 pounds, strutting erectly wherever he ventures, sporting a deep mahogany-red body color, flaunting iridescent greenish-black feathers and wearing a ruff that glistens in the sun, our rooster, Don, dominated the surroundings for most of his adult life. Ā

Another reason to possess a male is to watch an amorous roo do the three-step shuffle around a hen (this is chicken foreplay) before mounting a hen and lowering his vent to hers so as to emit sperm.

Granted, for most of his life, Don has wanted to mate some two dozen times per day. That’s typical of all healthy roosters. So you can view showtime just about every hour of every day. Itās also a reason why you should have at least seven or eight hens in a flock with a rooster. Otherwise, the ladiesā backs may become de-feathered.