Starting your own seeds is a fun and inexpensive way to grow plants, but it has its difficulties. Here are 5 seed-starting problems and ways to solve them. 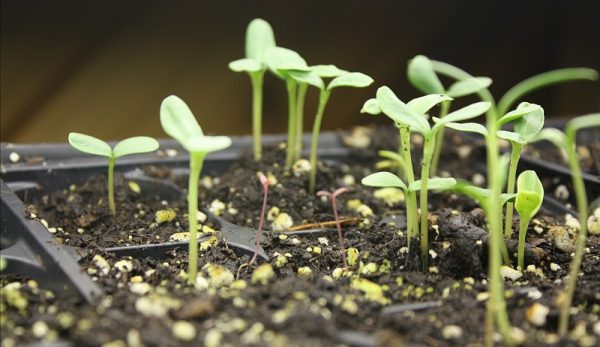 If you grow your own annuals, herbs and veggies from seed, you know the process is fun, but it certainly isn’t fool-proof. Even when you do everything by the book, issues can crop up. Sometimes entire flats of seedlings are laid to waste, or perhaps your seedlings are leggy and pale, or they may even develop mold. This guide to 5 seed-starting problems is intended to help you overcome some of the more common troubles you may face when growing from seed.

5 Seed-Starting Problems and How to Overcome Them

If you grow seedlings under lights, etiolation is often a sign that the lights are too far above the plant tops, or you don’t have them on for quite long enough. Make sure grow lights remain 2 to 3 inches above the tops of your seedlings and leave them on for 18 to 20 hours per day. If you’re following those guidelines and leggy, pale seedlings are still the norm, you may need to replace the light bulbs. Grow lights and florescent bulbs often age out after a few season.

Problem 2: Patches of Seedlings Are Dying Off

Damping off is a fungal disease that strikes seedlings from time to time. It typically occurs fairly quickly and is one of the most common seed-starting problems. Signs of damping off are seedlings that rot off at their base, causing the seedlings to topple over on top of each other. If left unchecked, damping off can wipe out an entire flat of seedlings in short order.

To prevent this pathogen from striking, always use a peat-based potting soil for seed starting. Peat-based potting mixes have a natural fungicidal property that reduces the chance of this pathogen, plus they’re sterile. Always use new seed-starting flats and trays, or disinfect old trays with a 10 percent bleach solution prior to use to kill any pathogens hanging out on them. A third and final way to prevent damping off is to make sure seedlings aren’t spaced too close together. Good air circulation cuts down on damping off. Setting a fan to blow a light wind over the tops of your seedlings for a few hours a day will improve air circulation, too.

Seed germination is a miraculous thing. When conditions are just right, seeds break dormancy, as long as they’re healthy and have been stored properly. You may discover that some seeds don’t germinate well if they’re too old, making this one of the most frequently encountered seed-starting problems. Each type of seed has a lifespan, even under perfect storage conditions. The viability of some seeds declines after just one or two years, while others remain viable for decades. To check the viability of seeds prior to planting, pre-germinate some in a damp paper towel placed inside a plastic bag. If germination rates are minimal, it may be time to replace the seeds with a new packet.

Another reason seeds may fail to germinate is due to their light requirements. Some seeds, such as sweet alyssum, Bells of Ireland, larkspur and many others, require light to germinate. Covering these seeds with potting soil at planting time may inhibit their germination. Other seeds require exposure to a cold period in order to initiate germination (called stratification). If your seeds are exhibiting poor germination, do a bit of research to make sure they’ve been planted properly and the seeds are still viable.

One of the most frustrating seed-starting problems is mold. Occasionally, a gray, fuzzy mold may develop on your seedlings and on the surface of the soil. This is often due to one of two problems, one of which isn’t much to worry about, but the other can be quite destructive.

If you failed to clean your seed-starting flats and trays, or you didn’t use a sterile potting soil, your seed trays may have developed botrytis, a destructive fungal disease that can wipe out both seedlings and mature plants. Foliage affected by botrytis grows a gray, fuzzy mold and the leaves eventually turn slimy and drop off the plant. Seedlings are quickly killed by this pathogen and there’s little you can do other than dump the whole tray of seedlings into the compost pile and start again, paying careful attention to the aforementioned points.

If the mold is growing only on the surface of the potting soil, and doesn’t seem to be affecting the plants, the culprit is probably just a fungus that feeds on the organic matter in the potting soil. Keeping the seedlings well ventilated with a fan, as mentioned in a previous section, can cut down on these harmless soil molds.

From time to time seed-starting gardeners may come across a tray whose seedling tops have gone completely missing. This has happened to me a few times and it took some investigating to discover the culprit of this seed-starting problem. The first time it occurred, I couldn’t find any problem during the day, so I checked the plants at night only to find a parade of ants walking off with severed seedling tops. The second time, a mouse was to blame. I suspected a mouse when I saw that some of the seeds were dug out and seedling tops were munched off. The problem was solved with a bit of peanut butter and a mousetrap.