Photo by Audrey Pavia Bob travels on the trail in Griffith Park, unfazed by traffic on the L.A. freeway. His name was Bob, and he was a big horse. So big, in fact, that he made my 14.3 hand Milagro look like a mini whenever they rode together down the trail. Bob was the ultimate […] 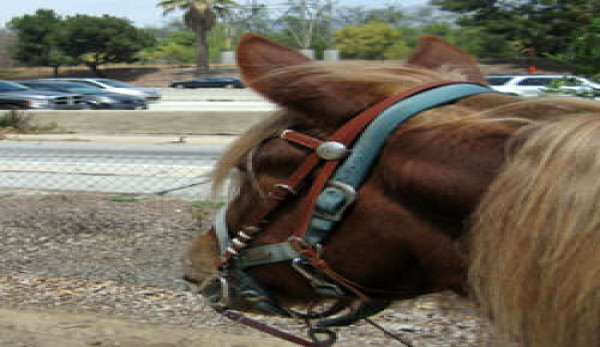 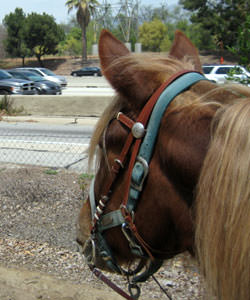 Bob travels on the trail in Griffith Park, unfazed by traffic on the L.A. freeway.

His name was Bob, and he was a big horse. So big, in fact, that he made my 14.3 hand Milagro look like a mini whenever they rode together down the trail.

Bob was the ultimate urban horse. He lived on a 1/2-acre property here in Norco, Calif., a suburb of Los Angeles, and carried his owner, Kathy, all over the city trails. Not only that, Bob â€” who grew up in the Midwest and was used as an Amish plow horse until less than 10 years ago â€” taught Kathyâ€™s children and nephews how to ride, comforted nervous horses and riders on trail rides, and carried Kathy to the California State Horsemenâ€™s Association trail trials championships last fall. He regularly made trail trial judges do double takes as he successfully negotiated trail obstacles designed for horses half his size.

WhenÂ Milagro and I first decided to tackle trail trials, Kathy and Bob were our anchors. Essentially fearless, Bob lead the way through densely forested sections of unknown trail, through deep and wide water crossings and across scary wooden bridges. Milagro was green and unsure of himself, but after a handful of trail trials with Bob, he found his courage. It wasnâ€™t long before Milagro asked Bob if he could take the lead some of the time, and of course Bob graciously said â€śyes.â€ť

But Bob was much more than a trail horse. He also introduced vaulting to delighted kids and adults. This sport, best described as gymnastics on horseback, is one of Kathyâ€™s passions, and Bob was more than happy to oblige.Â

The last time I saw Bob a couple of months ago, he seemed full of life. Kathy mentioned that he was having some problems with soft stool, but sometimes certain cuts of hay can cause that, and the problem came and went. When I got Kathyâ€™s email last month that Bob had succumbed to cancer, I was completely stunned. And devastated.

The thought of never walking down the trail with Bob at our side, towering over Milagro and stealing all the attention from passersby, was more than I could bear. I would never get splashed by that giant head at community watering troughs as Bob played with the water, oblivious to everyone around him. And I would never hear his deep nicker of farewell when Kathy would stop at my house and help me unload Milagro from her trailer after a day of being out on the trail.

My only consolation is knowing Bob is happy somewhere, doing whatever it is horse spirits do when they are free from the constraints of their sadly fallible bodies. But I sure will miss him.