Got gophers? You've got wildlife deeply connected to your property. 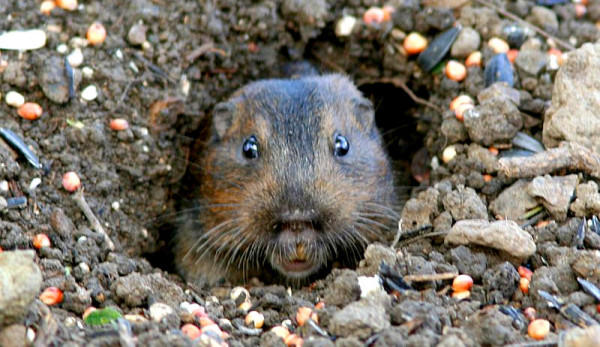 Gophers get a bad rap, yet like all mammals in the garden, they have a complex life history and social structure. At face value, they may seem like competition you are fighting to save your favorite crops. However, like voles and moles thereâ€™s always more to the story of our underground nemesis. You just have to dig a little to find out.

The cartoonish image of an entire plant disappearing down into a burrow can be attributed to the gopher. They are strictly herbivores, gnawing their continually growing teeth on plant roots, tubers, bulbs and other fleshy plant parts. Like moles, gophers are fiercely territorial and sparsely populated. One or two gophers on your property can make a big impact, though. BecauseÂ they travel through the soil much more than on the surface, they are better diggers than voles and create hundreds of mounds.

In contrast to moles, gophers donâ€™t create raised ridges. Gophers push out displaced loose soil and clods from their burrows, making irregular, sometimes crescent-shaped mounds. Other than these mounds, some types may also create smaller holes to come out and eat surface plants. Dirt plugs cap the holes after the gopher is finished, generally within 24 hours of its use.

Unlike the short-lived yet prolific voles, a gopher may live more than five years, and give birth to an average of five young each year. If they survive, the young will have to claim their own territory, which can be an area as large as 2,000 square feet. According to one study of plains pocket gophers, they didnâ€™t come within 6 meters of another gopher, yet could recognize the otherâ€™s territory. They get to know their neighborsâ€™ boundaries through scent and deposits of feces. It is likely that they also sense each othersâ€™ seismic vibrations underground. They can feel another gopher digging and communicate through teeth-clacking, but they keep their distance.

Gophers use their strong, sharp front teeth for more than gnawing plants and chatting with neighbors. For some species, their incisors are tools for digging and removing obstacles underground. How can they do this without filling their mouths with copious amounts of dirt? With special lips that can close behind their incisors and block their mouths from the debris.

The gopher face is also conveniently equipped to carry food, hence the name “pocket gophers.” A few other animals, like pocket mice and kangaroo rats, have these fur-lined pouches, too, but the difference with pocket gophers is that the pocket opening is on the outside of the cheek. To empty and clean the pouch, they can be turned inside out. Such a tidy little rodent.

BecauseÂ gophers are well-designed for a cool, dark underground life, they are very sensitive to heat. The tail is an important cooling system for the animal, part of its thermoregulation system that helps it maintain a comfortable internal body temperature. Among the differences from one species to the next, the tail length is variable. The higher the elevation, the shorter the tail. The longer the tail, the more naked surface area that can dissipate heat.

Gophers might invade gardens, but they are not exotic, introduced species. They are right at home, endemic to North and South America. With more than 30 species in North America, each one named for specific localities, it is clear that these critters are very connected to their land, on many different levels. They prefer loose, dry, sandy soil and will avoid saturated areas. Their body size may be directly related to the looseness of the soil; more compact earth means more compact gopher sizes.

They rarely are spotted on the surface, where they could be snatched up by owls, hawks, foxes, coyotes, or bobcats. Skunks and badgers may claw their way into the burrow and corner gophers. The only predators able to follow them down their holes are ferrets, weasels, rattlesnakes or the aptly named gopher snakes. Salamanders, toads, lizards and other small creatures use abandoned gopher holes for a quick escape or a cool, shady relief.

The territorial nature of gophers also limits their genetic mixing, resulting in many distinct species, each in isolated locations. The small geographic pockets of pocket gophers could lead to extinction of entire species since the populations are relatively small and potentially vulnerable to a major disturbance or disease. Studies have shown the behavior of prairie pocket gophers is largely based on protecting a food source, rather than defending their families against competition.

Over geologic history, the changes in climate appear to have affected the changes in gophers as well. Teeth and skulls evolved into digging machines when and where conditions created harder, more compact soils. Scientists are working to predict how warmer, wetter winters and more extreme heat may affect all underground life. The distribution of gopher species are an important clue to how the ecosystem as a whole is shifting.