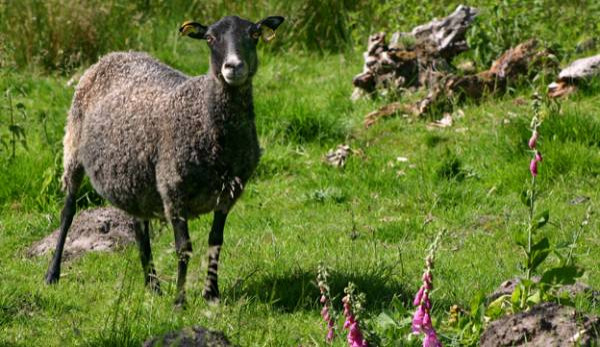 History: The breed was first established on the Swedish island of Gotland by the Vikings with Karakul and Romanov sheep brought back from expeditions deep into Russia and crossed with the native landrace sheep. The Vikings were great seafarers as well as sheep farmers and took these animals on their extensive voyages to provide meat and skins along the route. Hence the spread of these Northern short-tailed sheep and the development into related breeds such as Goth sheep, Icelandic, Finnsheep, Shetland, North Ronaldsay and Manx. Primitive horned Gotland sheep still exist on the island of Gotland today.

Conformation: With a calm, friendly disposition,Â Gotlands are fine-boned and of medium size. The sheep has a hornless black head sometimes with white markings and free from wool. The eyes are bold and they have alert medium sized ears. They have small neat muzzles with even jaws and teeth set squarely on the pad. With slender necks and shoulders set smoothly into a level back with generous length,Â they haveÂ good depth and reasonable breadth of body. Their black legs are slender,Â well spaced and upright. Dense, long, lustrous grey fleece, occasionally black, or white. Clearly defined even curl and staple, soft to the touch. They have a short, hair-tipped tail. Fleece is fine, long, lustrous and dense with clearly defined curl and staple, soft to the touch. It is typically 29 to 34 microns in diameter at 18 months of age, as measured midside at the last rib. Lambs wool is typically in the low to mid 20’s micron range.